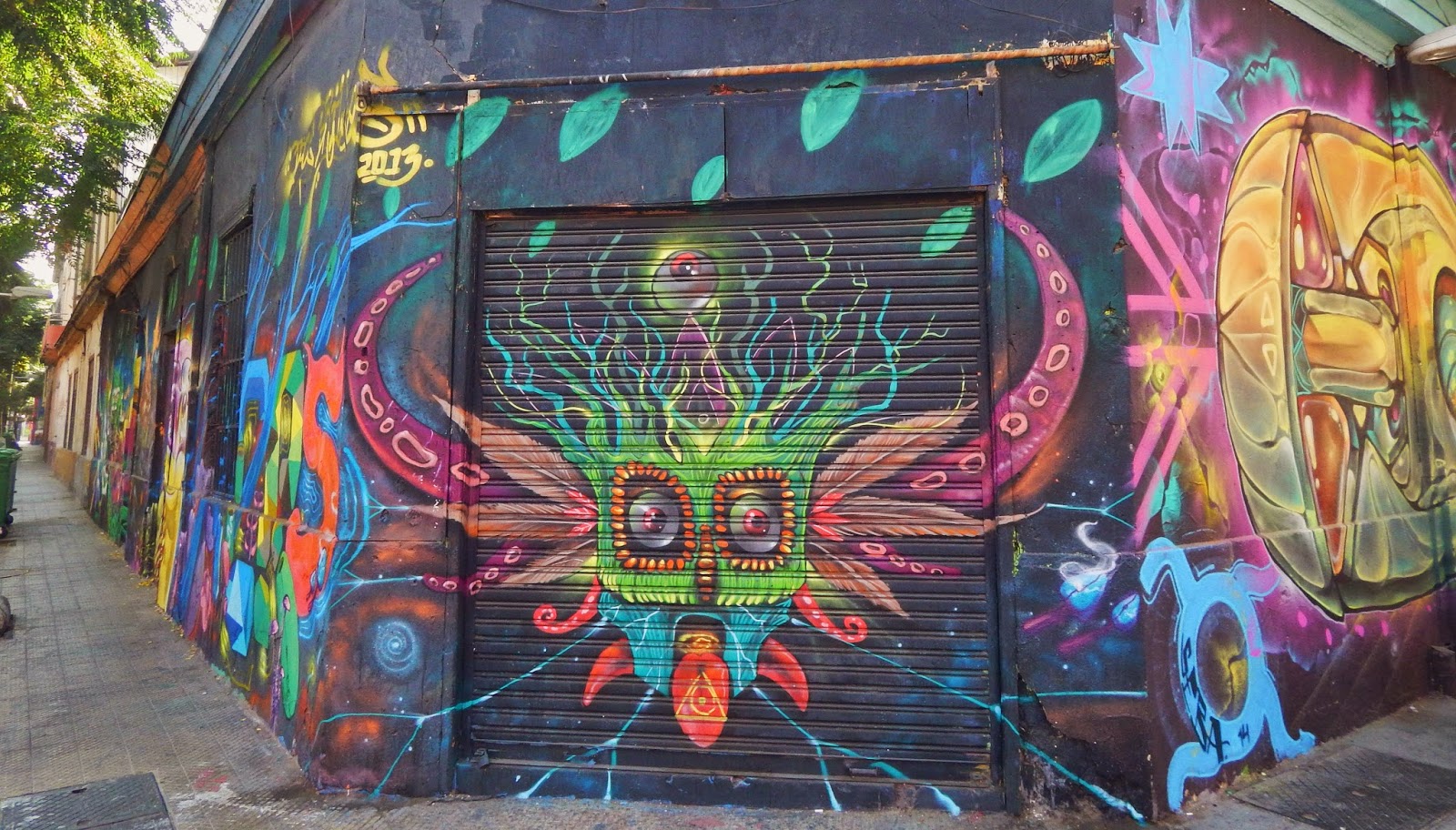 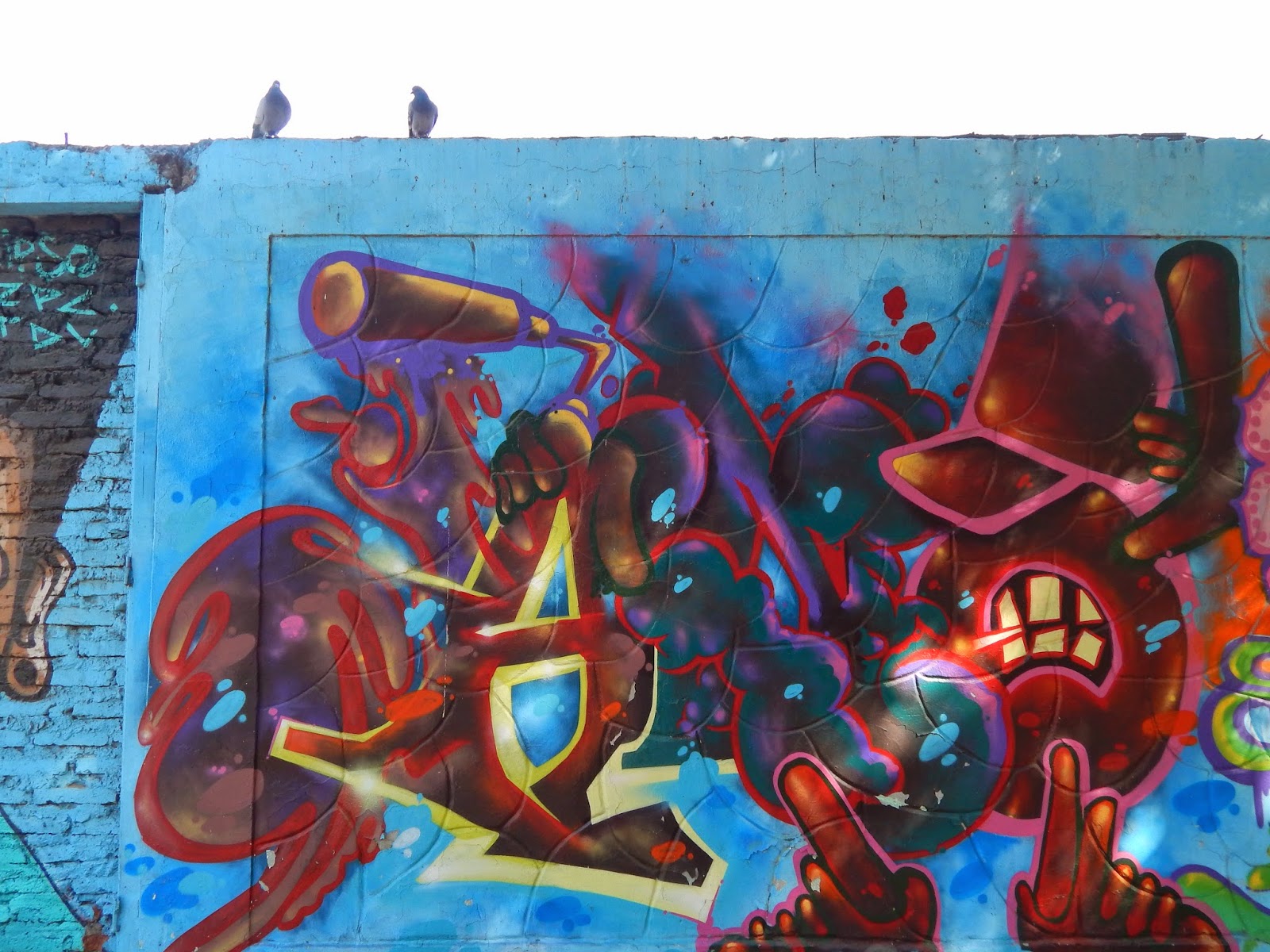 The neighbouring district, Barrio Brasil, is famed for its street art so we set out that morning to wander. Tossing our maps aside, we let our eyes lead the way, finding new murals to photograph at every corner and spotting church steeples above rooftops which acted like beacons. A few times we found ourselves at a corner and were torn in four different directions, wanting to go each way at once.

The morning was characteristized by this slow-paced meandering as we appreciated the colourful displays and were drawn down alleys and around corners by their intoxicating paint. The art ranged from simple small designs, to block-engulfing hallucinations. It's really best if we just let the pictures do the talking (and trust us, this is only a small sampling). 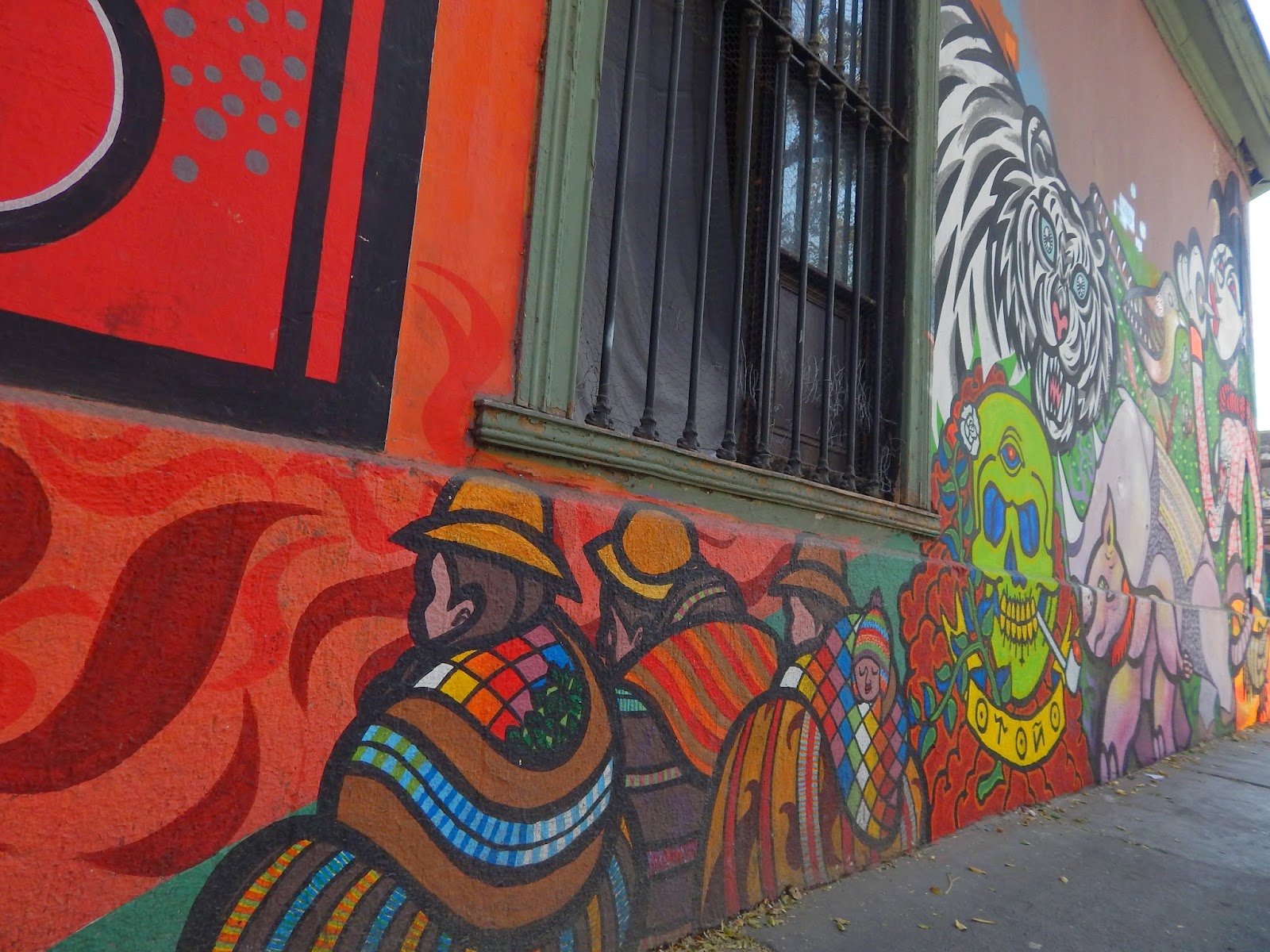 As it was Semana Santa (Easter Holidays) the parks were often populated by groups of teenagers who never missed an opportunity to tease us/try to make us feel uncomfortable. We had been told that the neighbourhood is best avoided at night, but the four of us in broad daylight rarely felt uneasy. 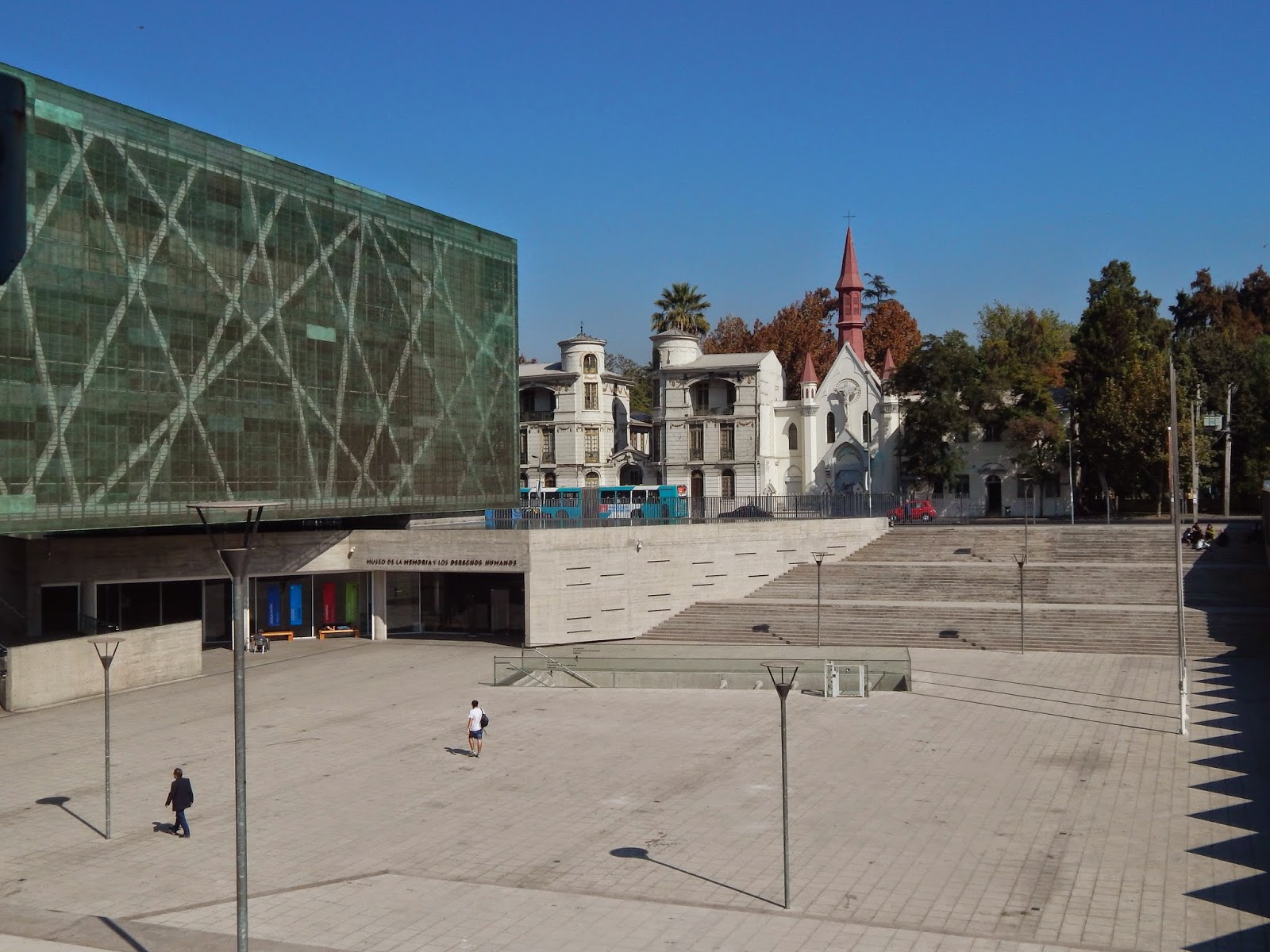 Our walk through the living art galley was also functional as the Human Rights Museum lay on the western edge of the neighbourhood. After nearly two hours of wandering the streets of Barrio Brasil, we finally arrived at the industrial-looking museum. Erin opted for an audio guide, knowing the text-heavy displays would all be in Spanish, where as Craig chose to practice his language skills. Unfortunately, photography was not permitted inside.

The foyer of El Museo de la Memoria y Derechos Humanos held an attractive artistic display of photographs hung to depict a world map. Each photograph sadly demonstrated a time in history where human rights were violated. A second display showed pictures of all the memorials in Chile arranged as a topographical map of the country. Right away, it was easy to see that this museum would not only be informative but well-presented. 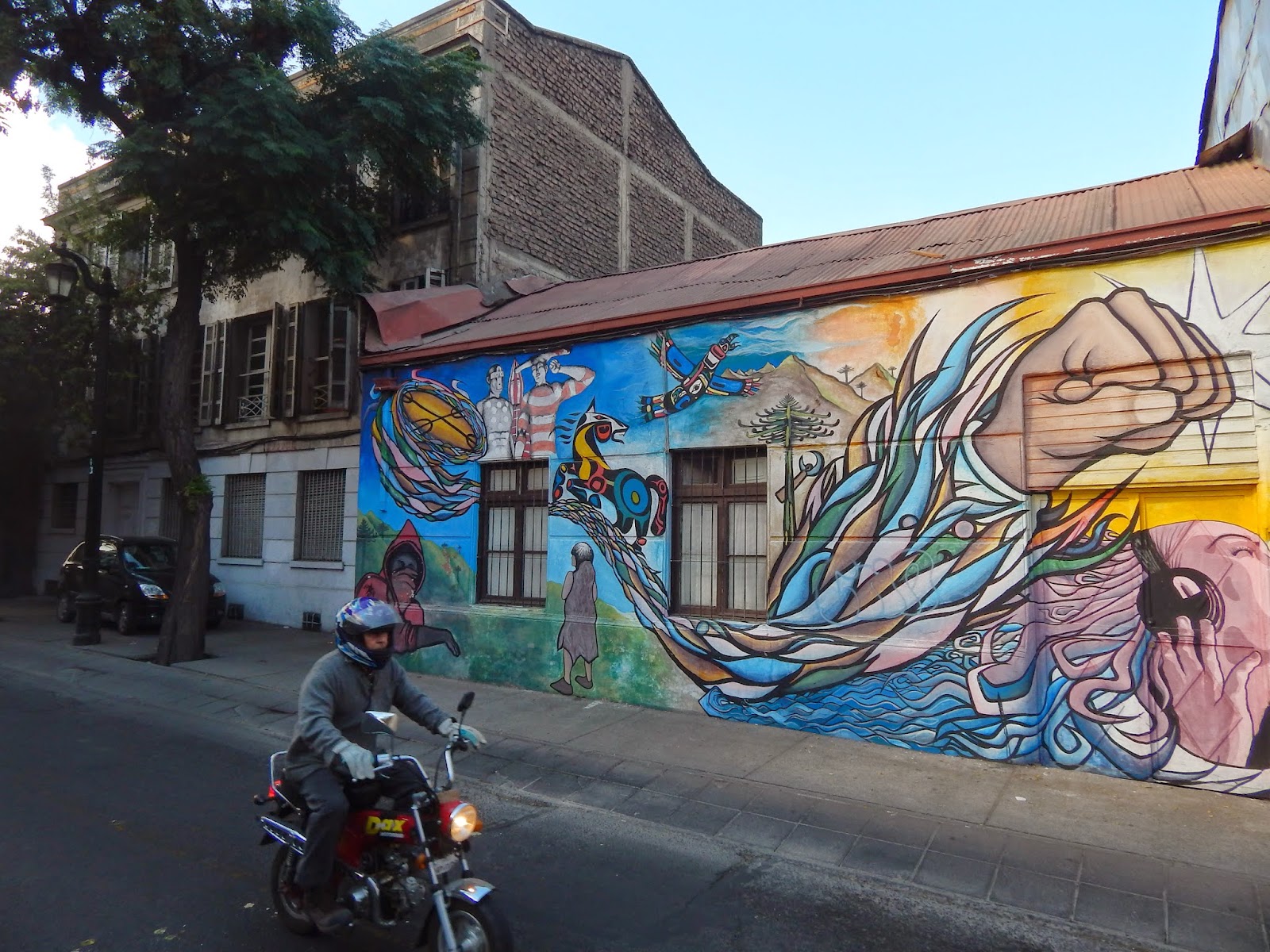 We spent a good hour and a half on the museum's first floor, viewing movies, photographs, and listening to/reading text. It all related to the lead-up and initial military take-over on September 11, 1973. On this day then-president Salvador Allende was under siege in the presidential palace; tanks and aircraft fired upon the building, and knowing that his time had come to an end, Allende broadcasted an empassioned speech to the Chilean people affirming his faith in them. Following the broadcast he took his own life. 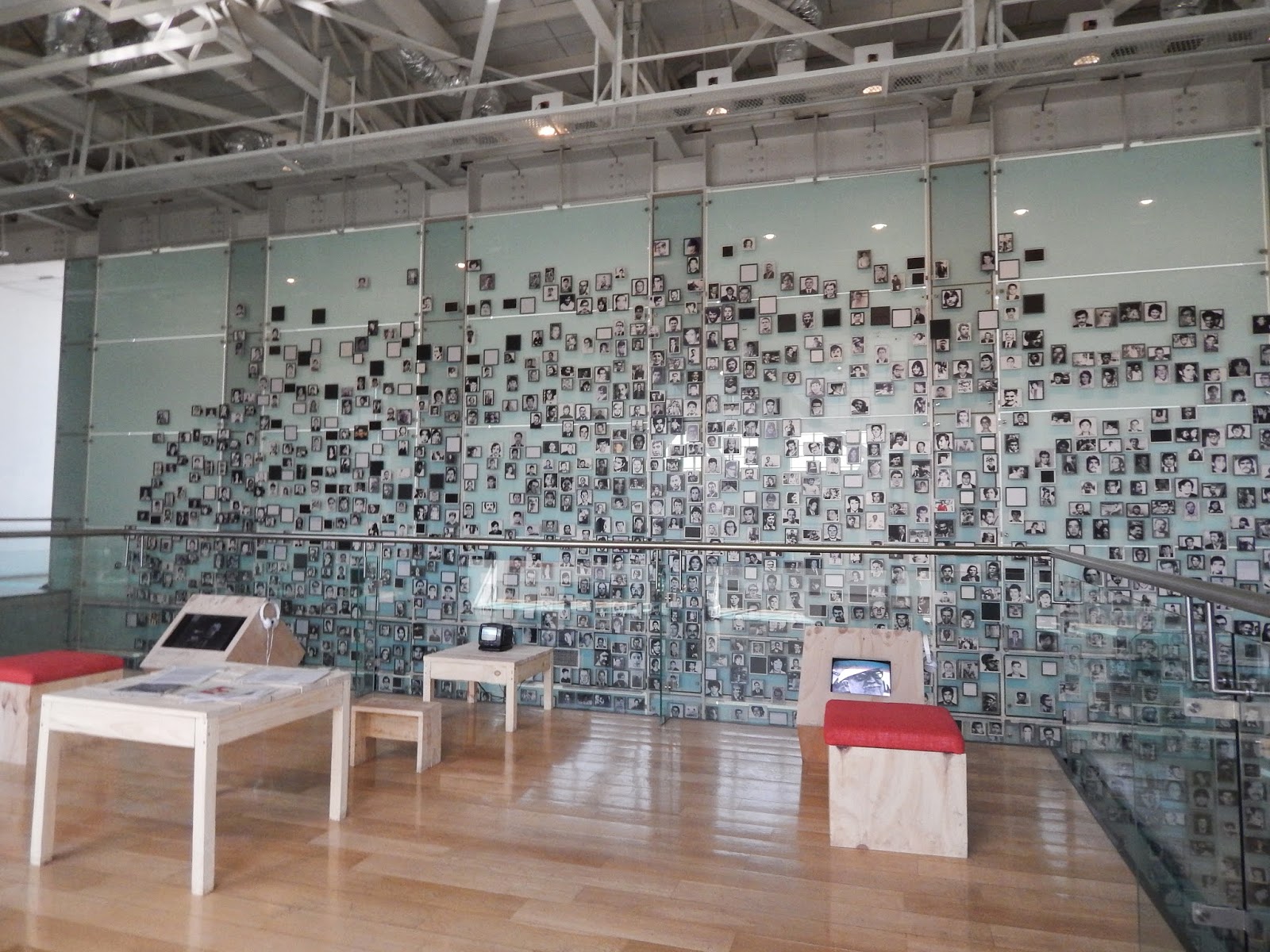 The main floor of the museum continued by explaining the large-scale "disappearances" that occured over the next 17 years, the location of the many internment areas that were often houses in regular neighbourhoods, and the various forms of torture and execution used on roughly 40 000 Chileans. It wasn't easy making our way through room after room, and Erin was reminded of the book she'd just finished on the similar situation in Argentina's recent history.


When Erin, Kristen and John soberly came to the end of the first floor, (Craig was already finishing up the floor above), they agreed that it was time for a lunch break. We hadn't expected the content to be quite so extensive, and it wasn't long before we were back in there finishing the displays. 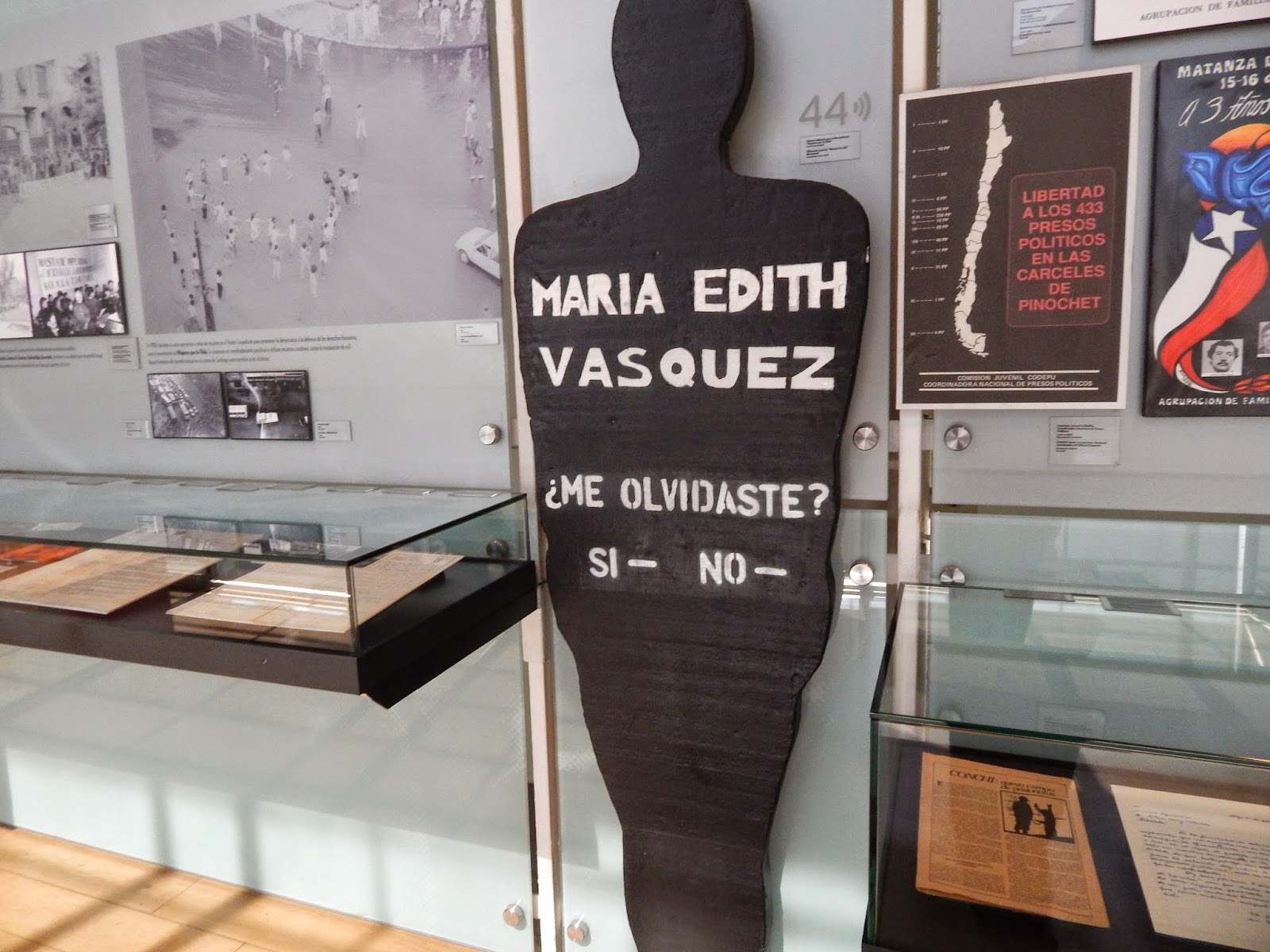 Floor Two was dedicated more to the stories of the disappeared and the efforts taken by those opposing the regime. Craig sneakily took a photograph of one act of retaliation: these profiles were placed all over the city. The woman whose name appears on the silhouette had disappeared and the government had previously masked her disappearance with a false story. Once her body was discovered washed up on shore, it revealed that the government was in fact disposing of bodies in the ocean, and hers told of the acts of torture taking place. A movement spread through the country to combat the dictatorship and shed light on the truth for the rest of the world. 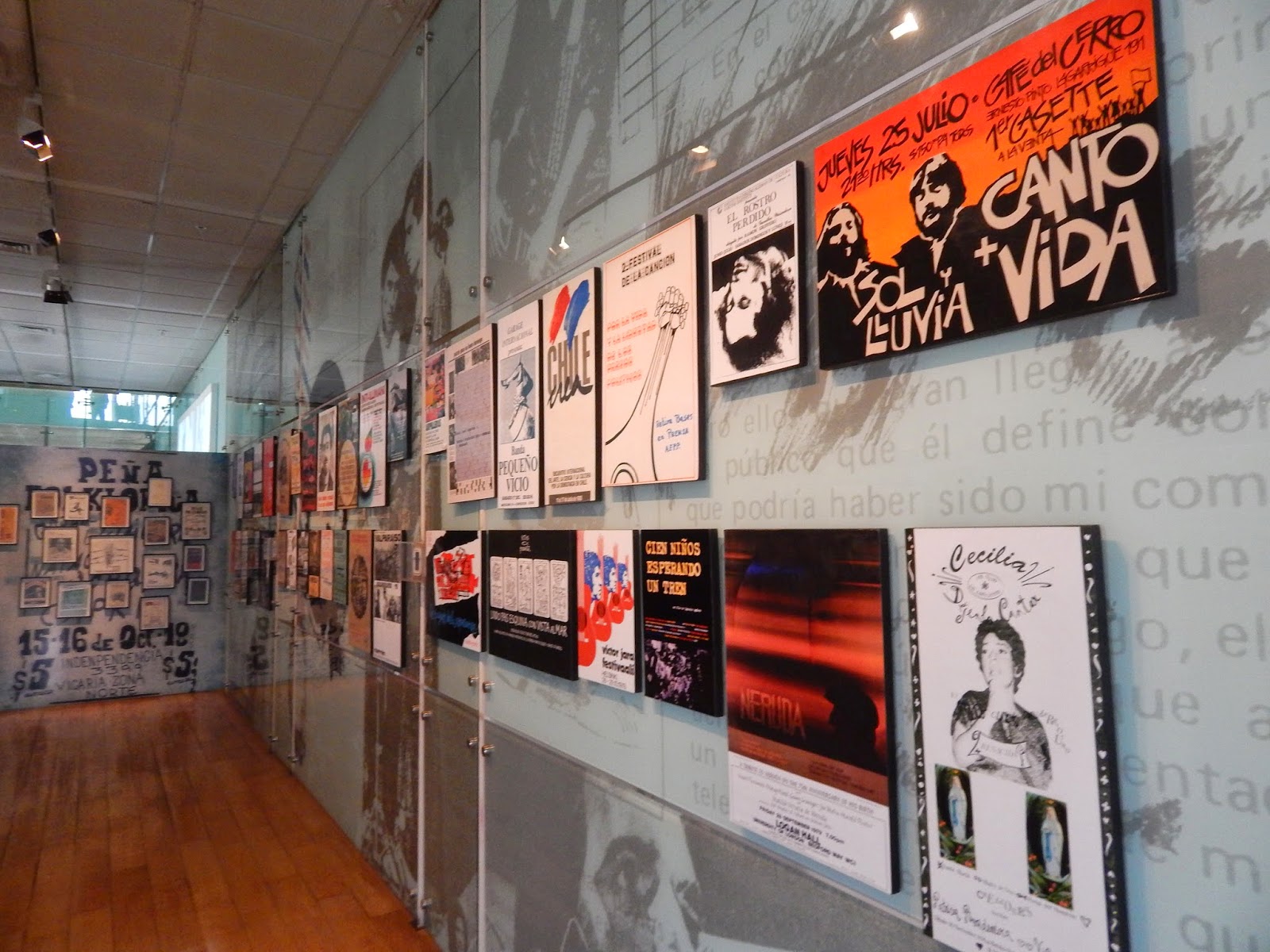 It took until the year 1989 for Pinochet to finally step down after losing a plebicite that would have extended his reign another eight years. This allowed a democratic election to take place the following year. It wasn't until 1998 that Pinochet was arreted in London, and Clinton released information sharing the US government's assistance in the 1973 coup. Pinochet was put under house arrest and deemed unfit to stand trial. He died in 2006 at the age of 91 untouched by the scales of justice. 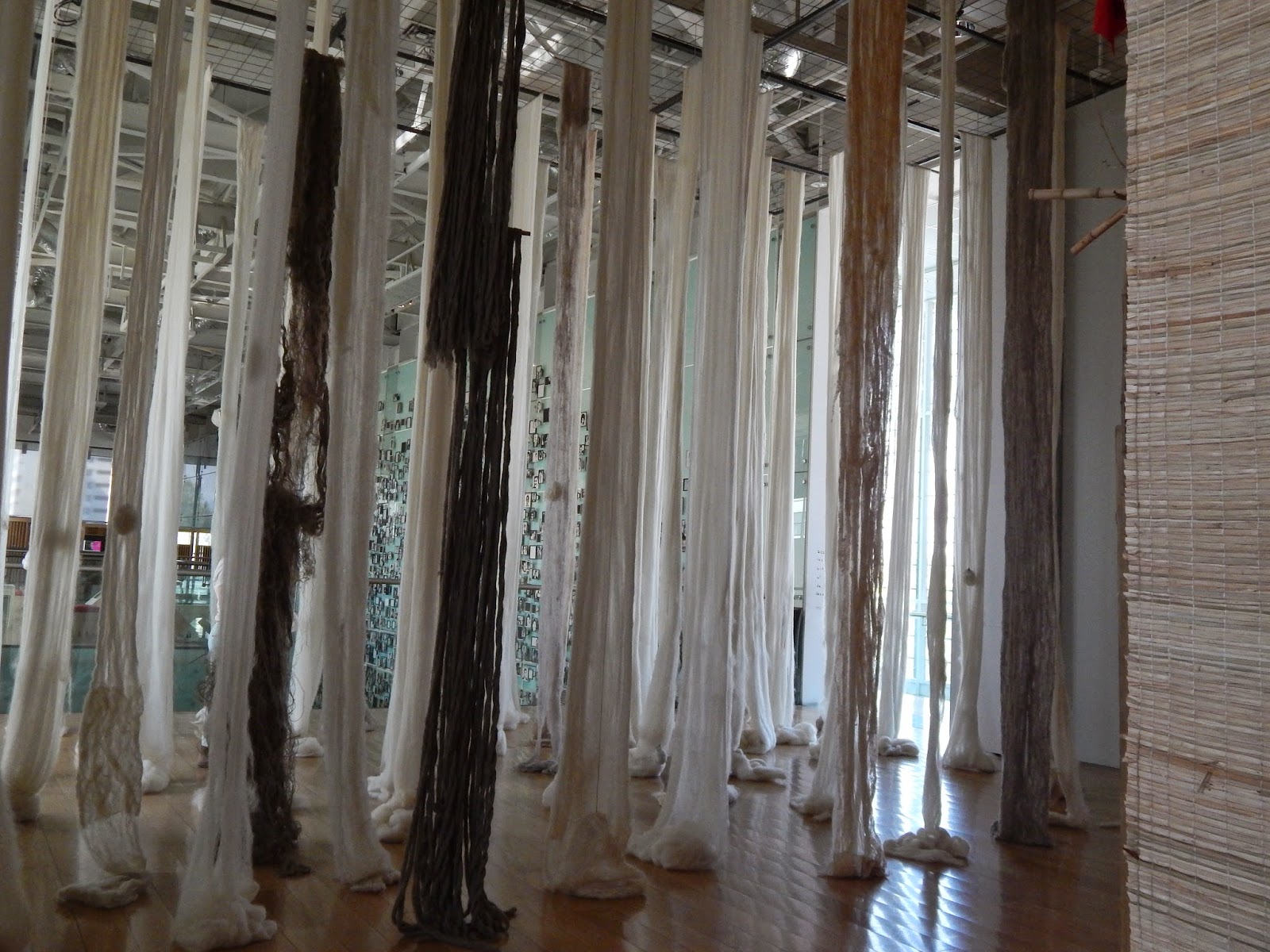 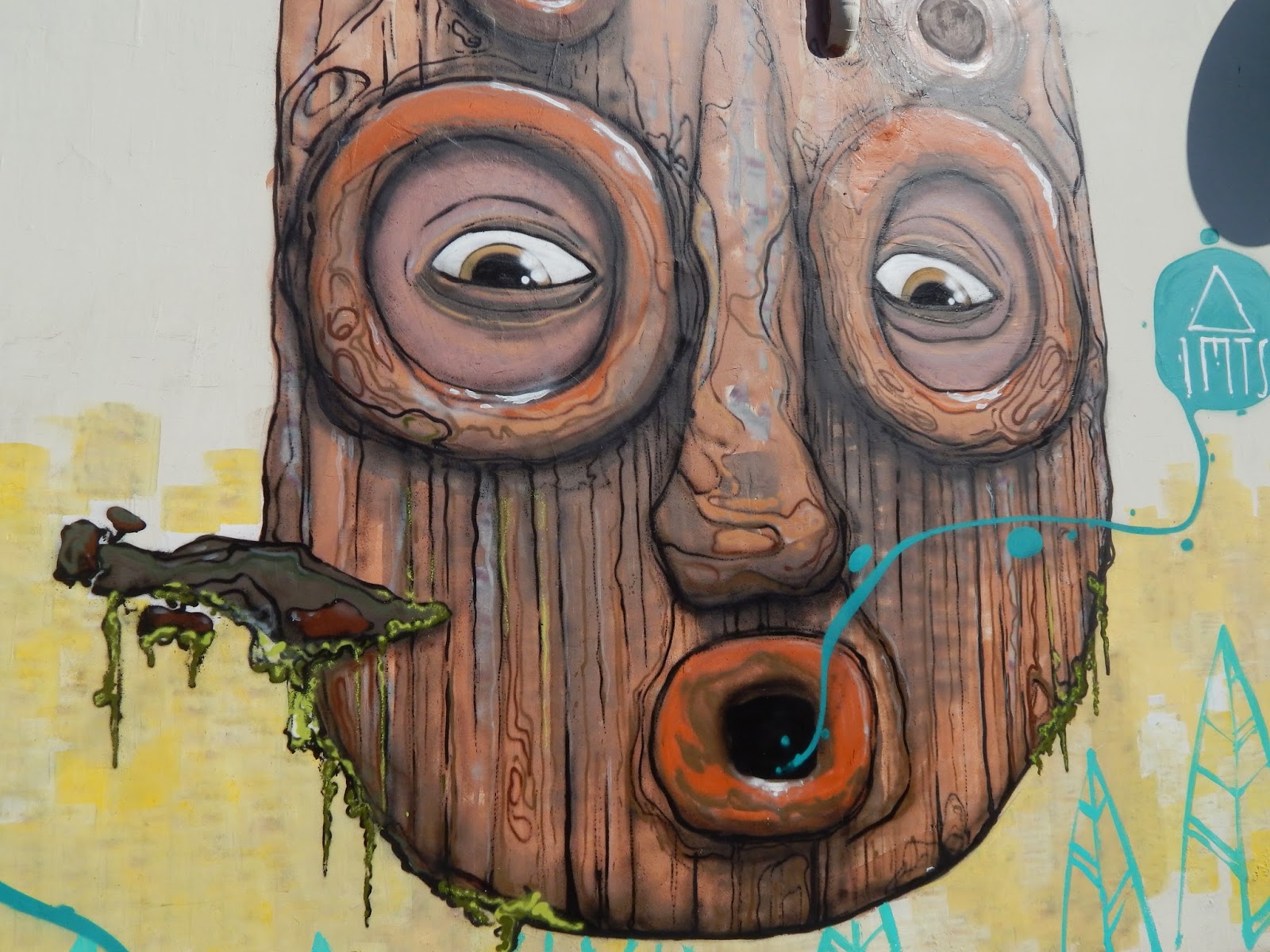 It was a heavy day, but interesting and informative, and we felt satisfied with a better understanding of Chile's tumultuous recent past. 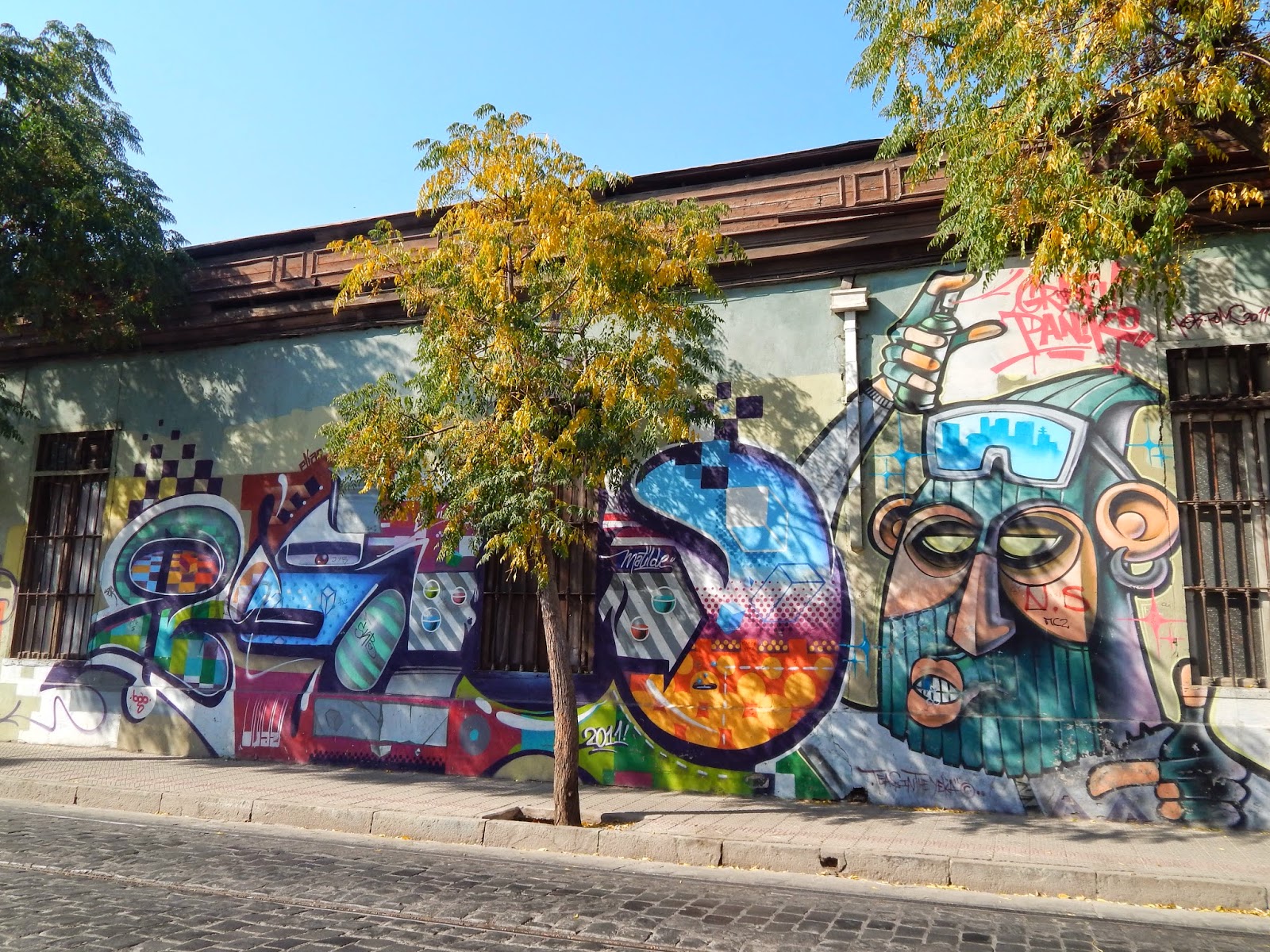