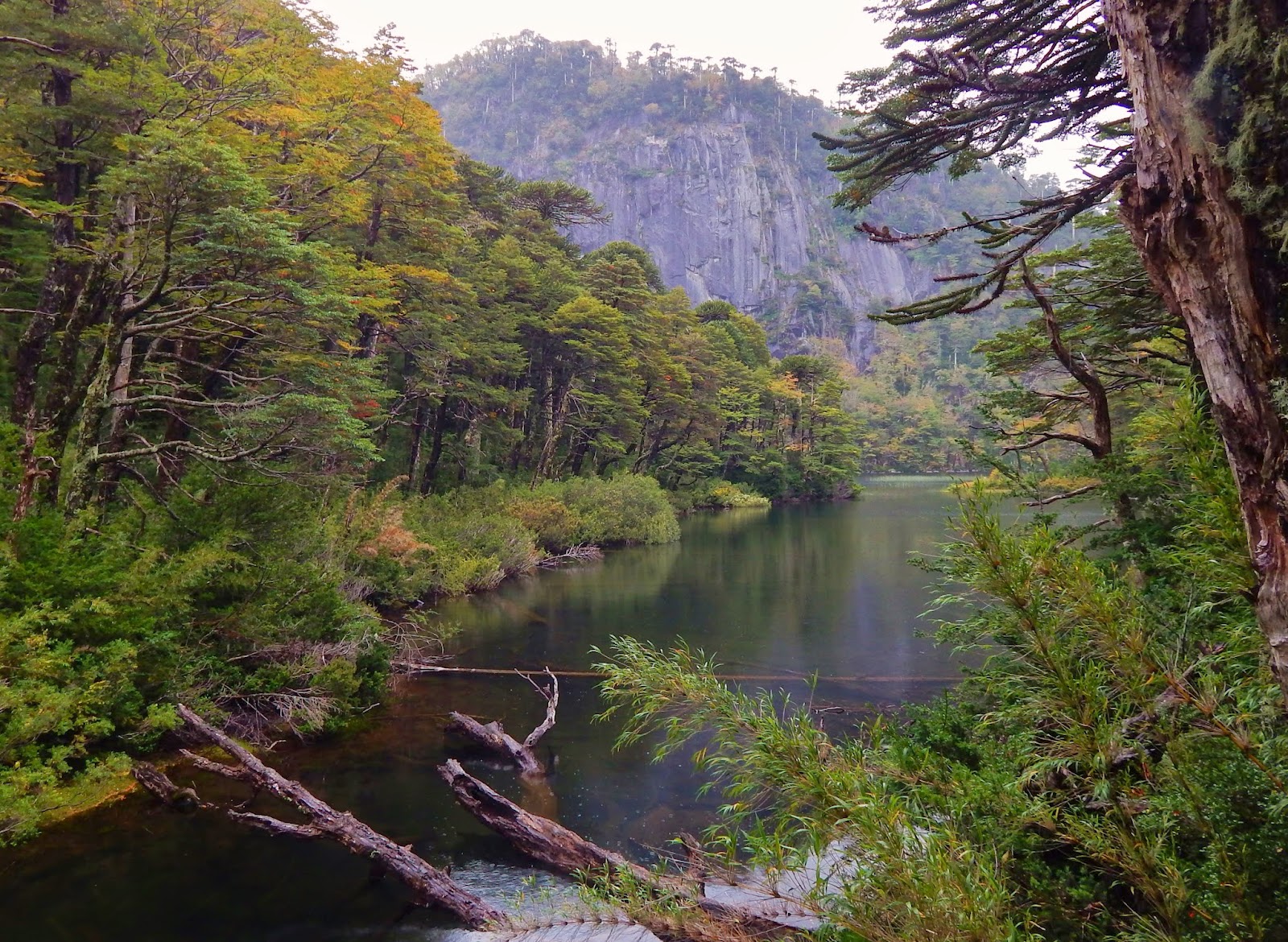 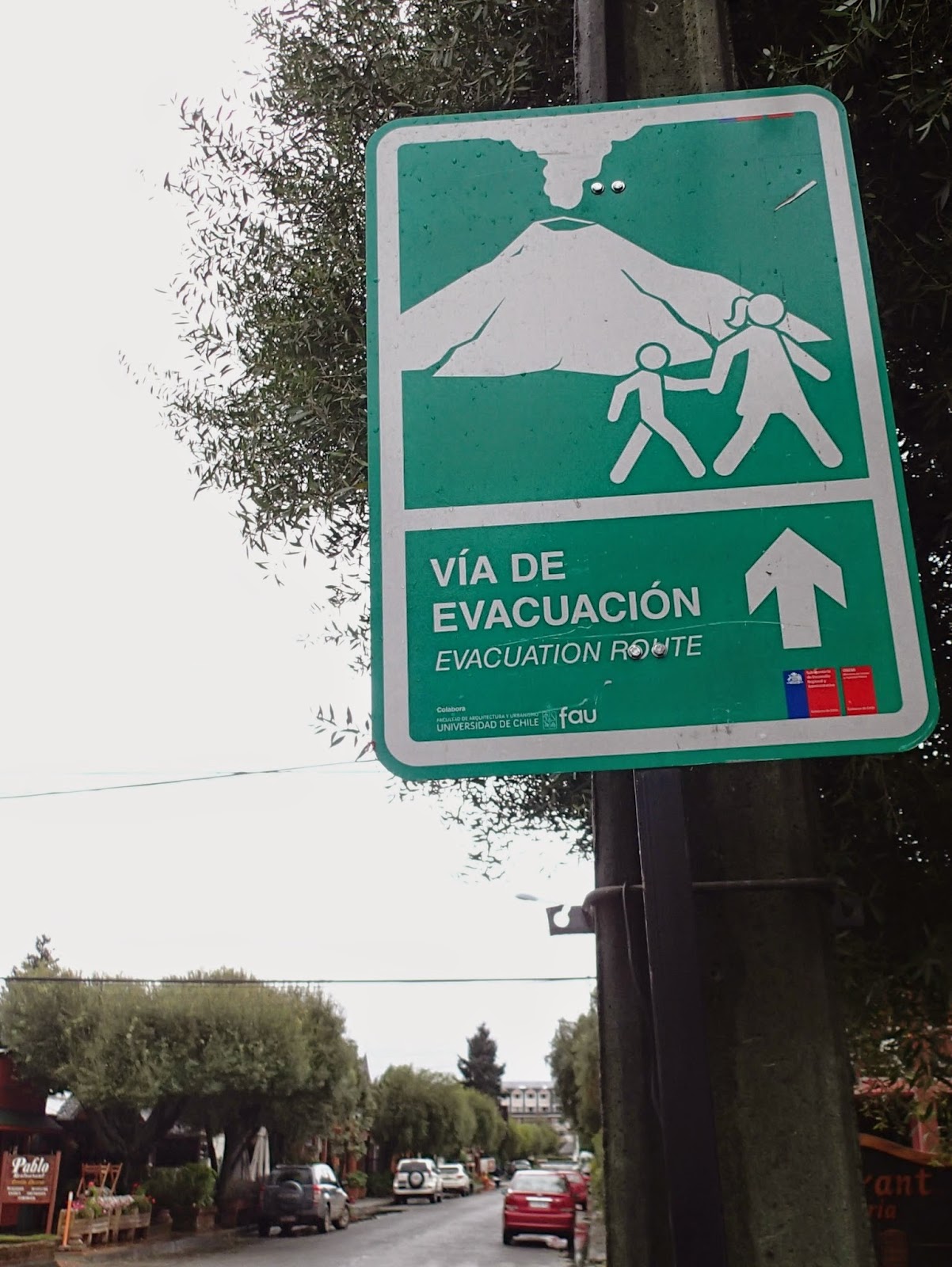 It continued to pour rain as we made our way across the border. We high-fived after our third and final border crossing into Chile by bus and were glad they were finally over. Thanks to the nice border guards, we were able to save our scarce blank pages and get stamped on ones that were stuffed.

We searched around a bit and found a small, basic hostel run by a cute old couple. It was certainly draughty but downstairs there was a roaring fire in their wood oven. The town's famous volcano wasn't anywhere to be seen, but we were optimistic that this incessant rain would have to stop sooner or later. 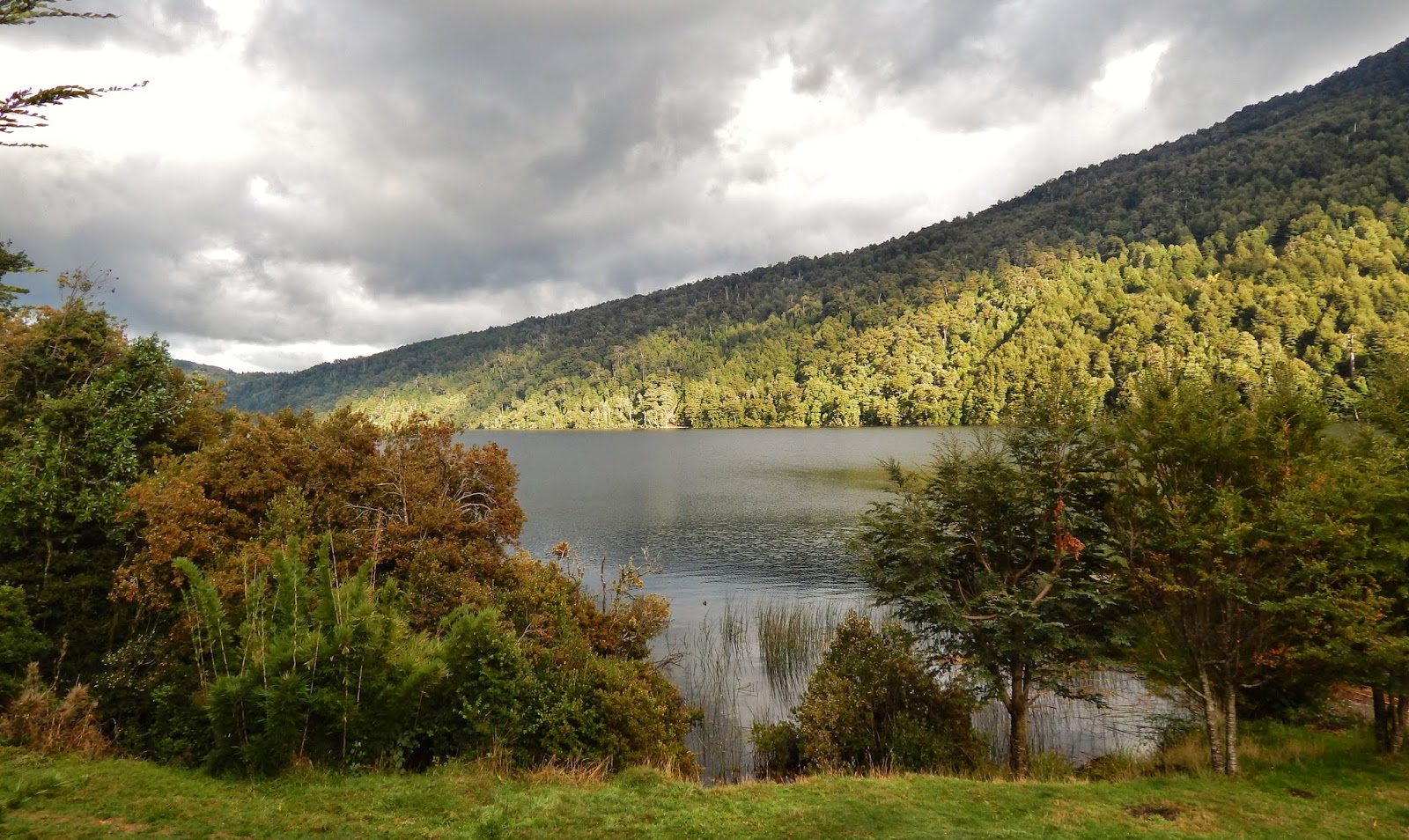 We awoke the next morning and were on the 8:30 bus into the Huerquehue National Park. The bus ride was uninteresting as we were seldom blessed with views. Arriving we could see some sunshine making its way across the hill opposite us, across a tranquil lake. We did not dare to dream that the fractured sunlight would last through the whole day but we were excited to see our first glimpses of blue sky for some time. 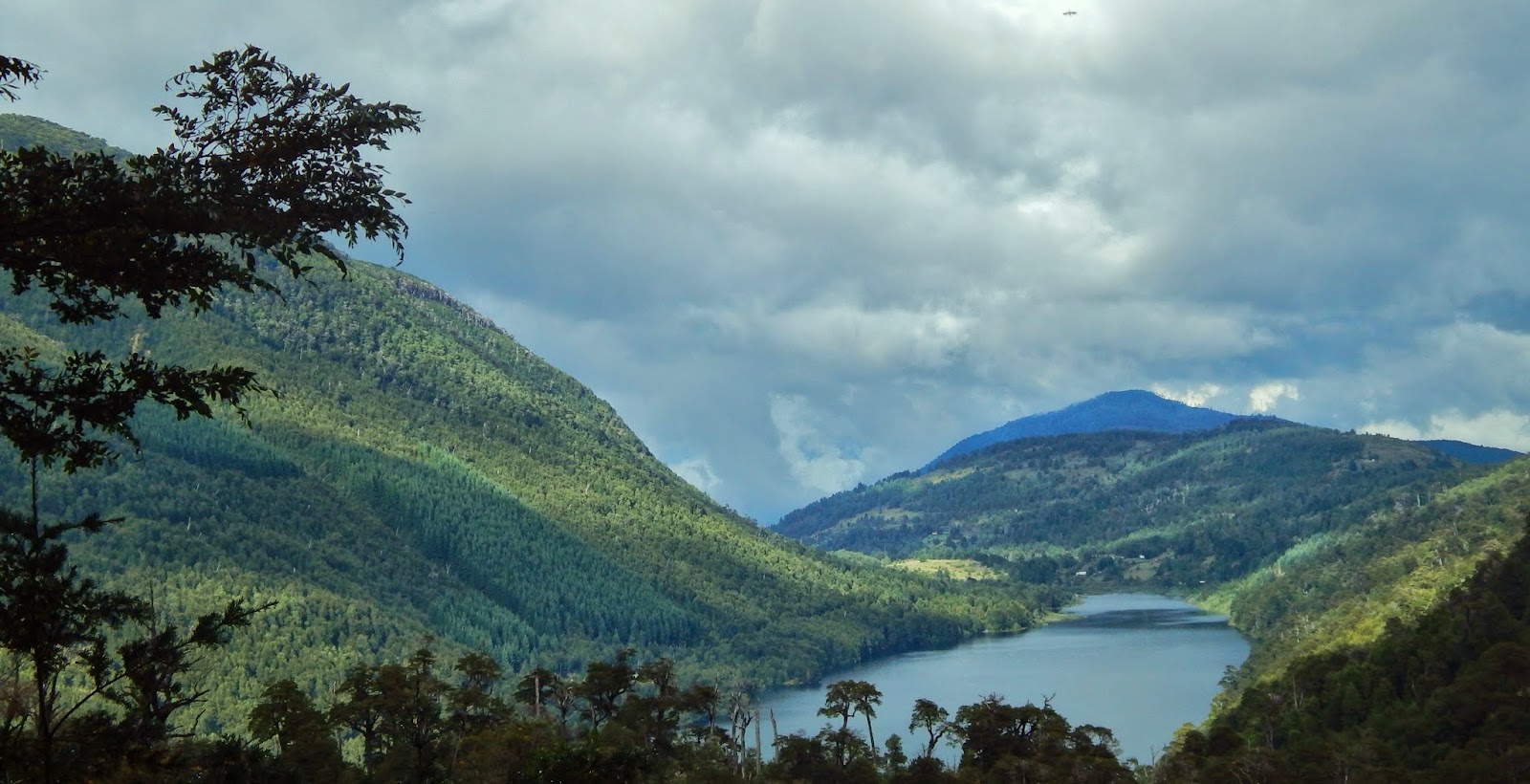 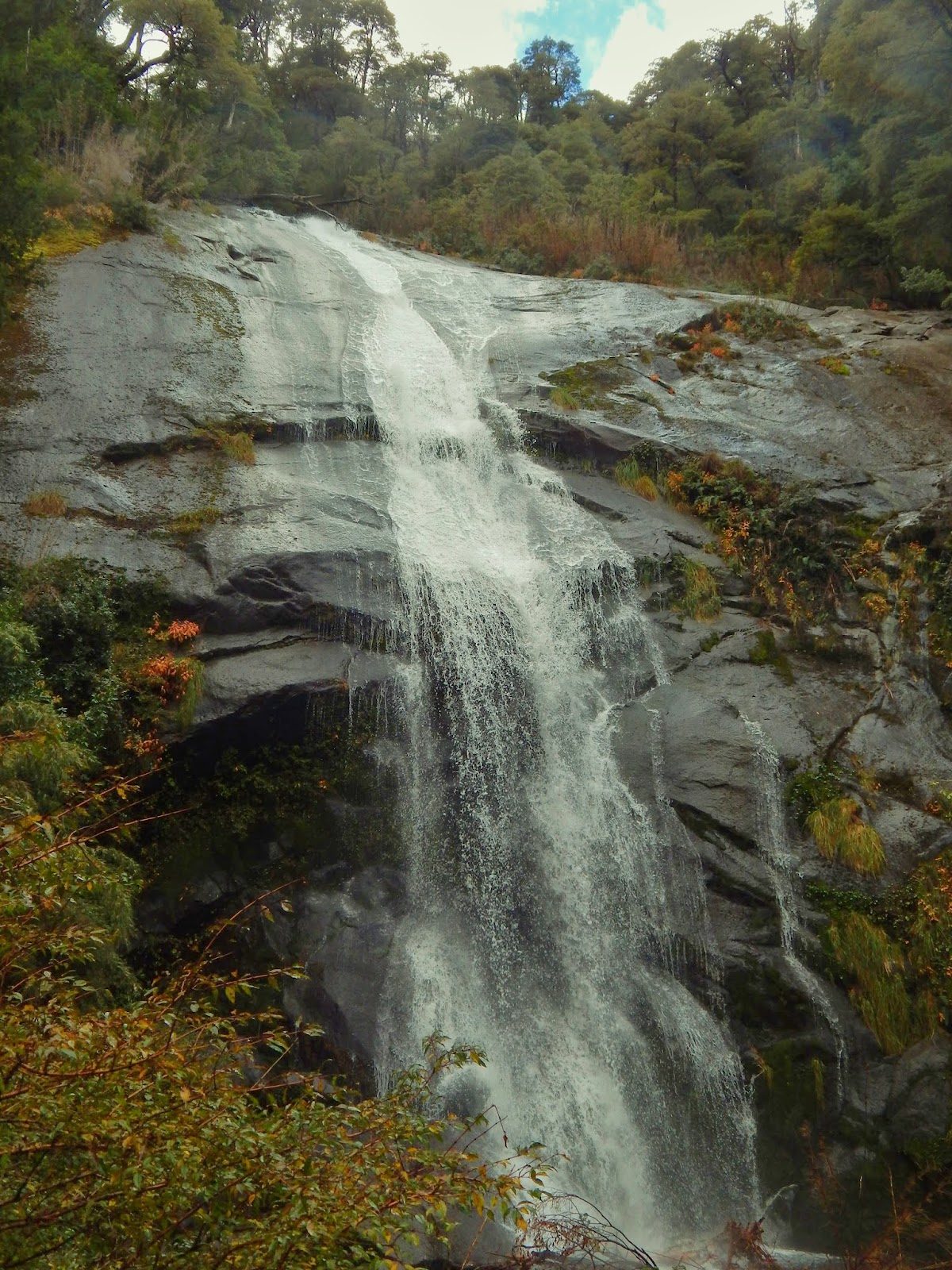 After a short while, we arrived at a small village, and the trail melded into a dusty road and then once separated again wove its way up a hill through forested pasture.1 hour into the hike we had reached the NationalPpark. The primary trail would continue up unrelentingly, however off its trunk, branches would descend into the valley or to a cliff's edge to gain views of waterfalls and the valley. The rest of the time was spent within the forest; at one point we did find ourselves blessed by the rays of the sun. The leaves, finding the sun's light foreign to them after so much rain did not seem to know what colour they were meant to be as the canopy shone with a glistening silver glow. As we neared the top of the pass, the rain began, our already muddy path now turned to slush, and some bends into streams. 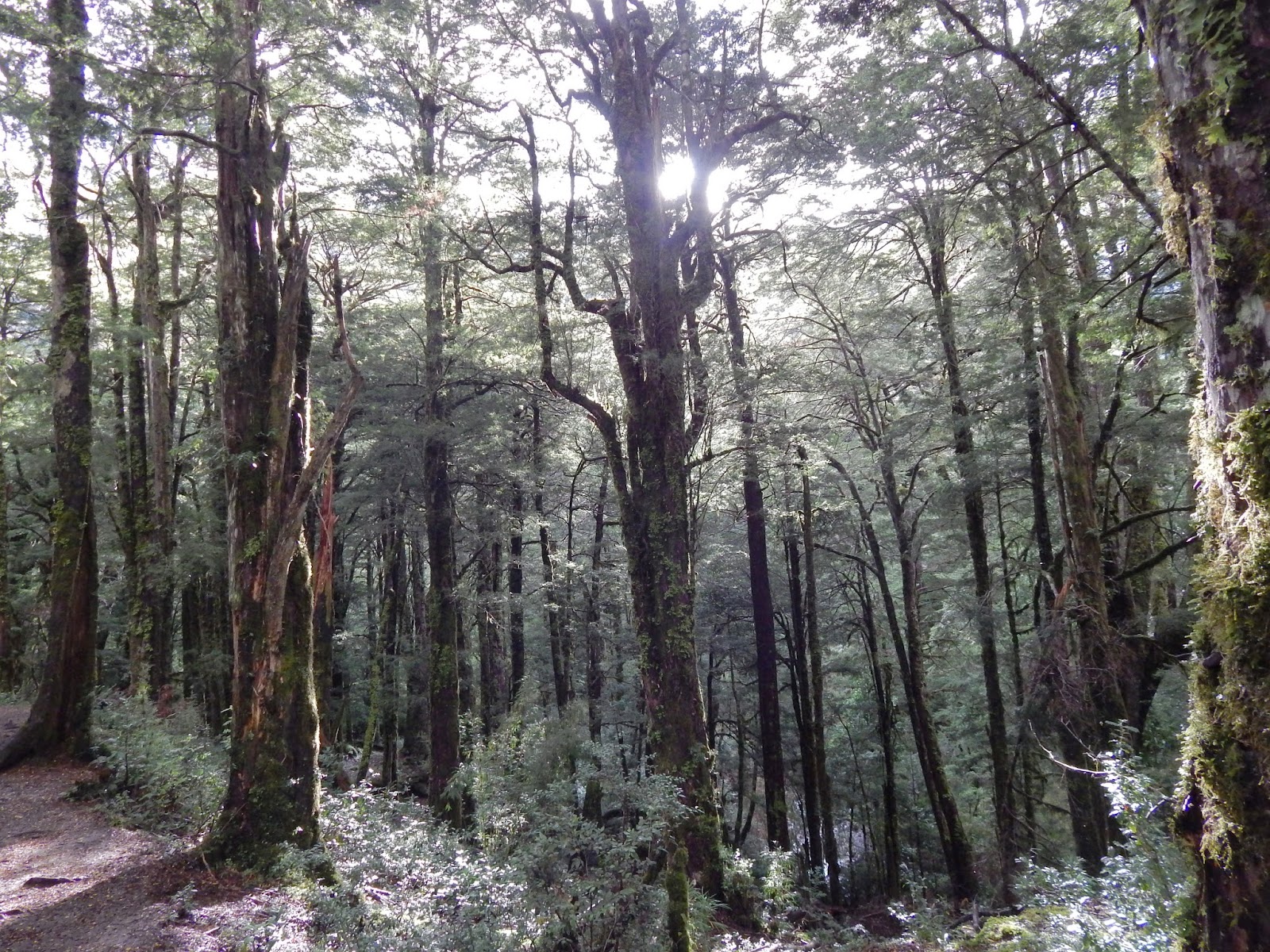 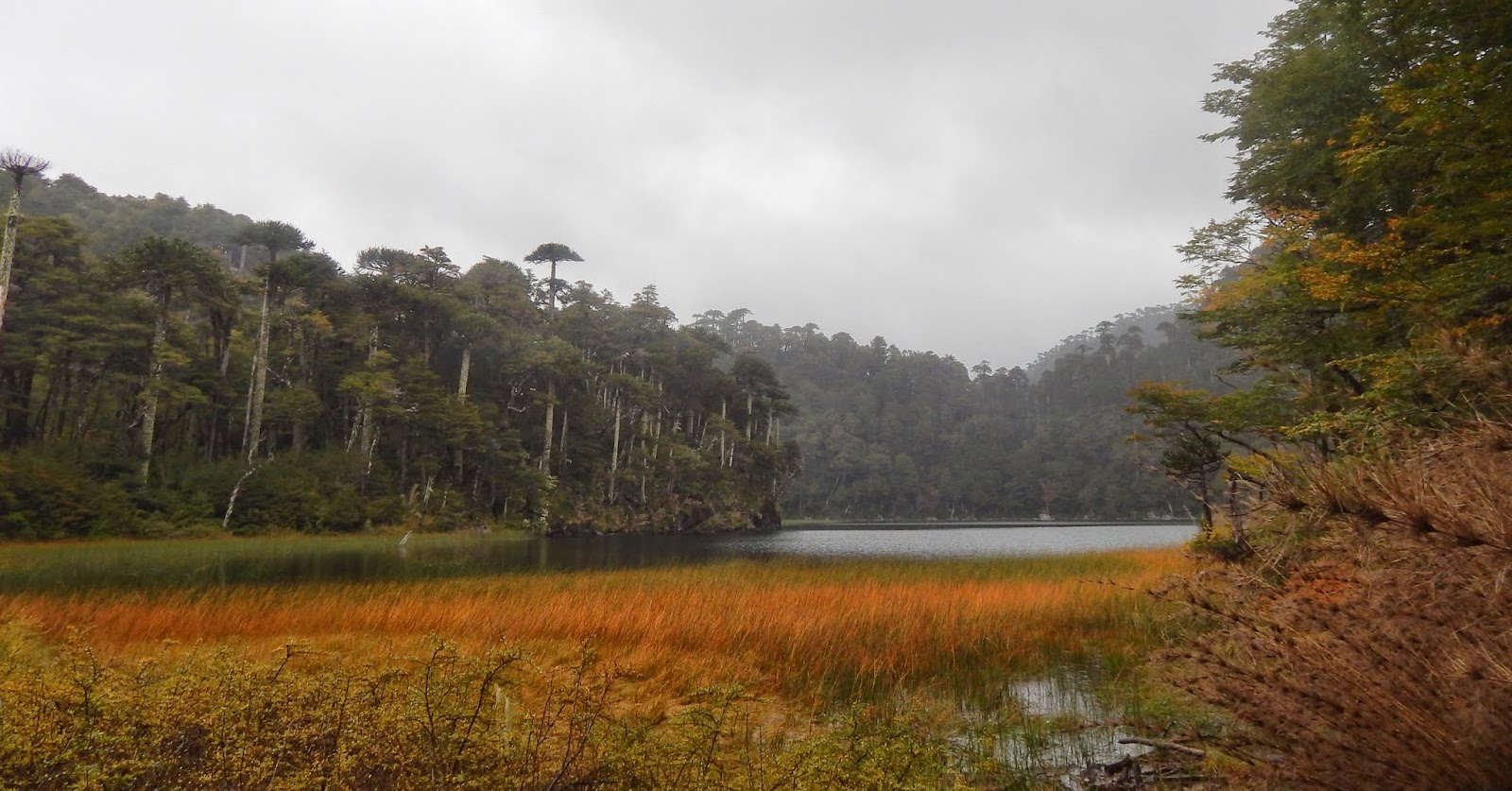 Rarely have I seen the scenery of a place change so quickly as when we crested the pass. Dry forest turned into alpine lakes ringed with strange exotic trees, yet amongst them the fall colours still showed and were complimented by the long yellow/orange grasses growing in the perimeter of the lake. The giant trees, that appeared as if African Baobabs had been spliced together with palm trees and a hint of pine, lined the tops of the Andean ridges with their striking silhouettes. Beautiful, although not as much so as other places we have visited, I can still give it the highest praise I have: it was like no where else I had ever been. 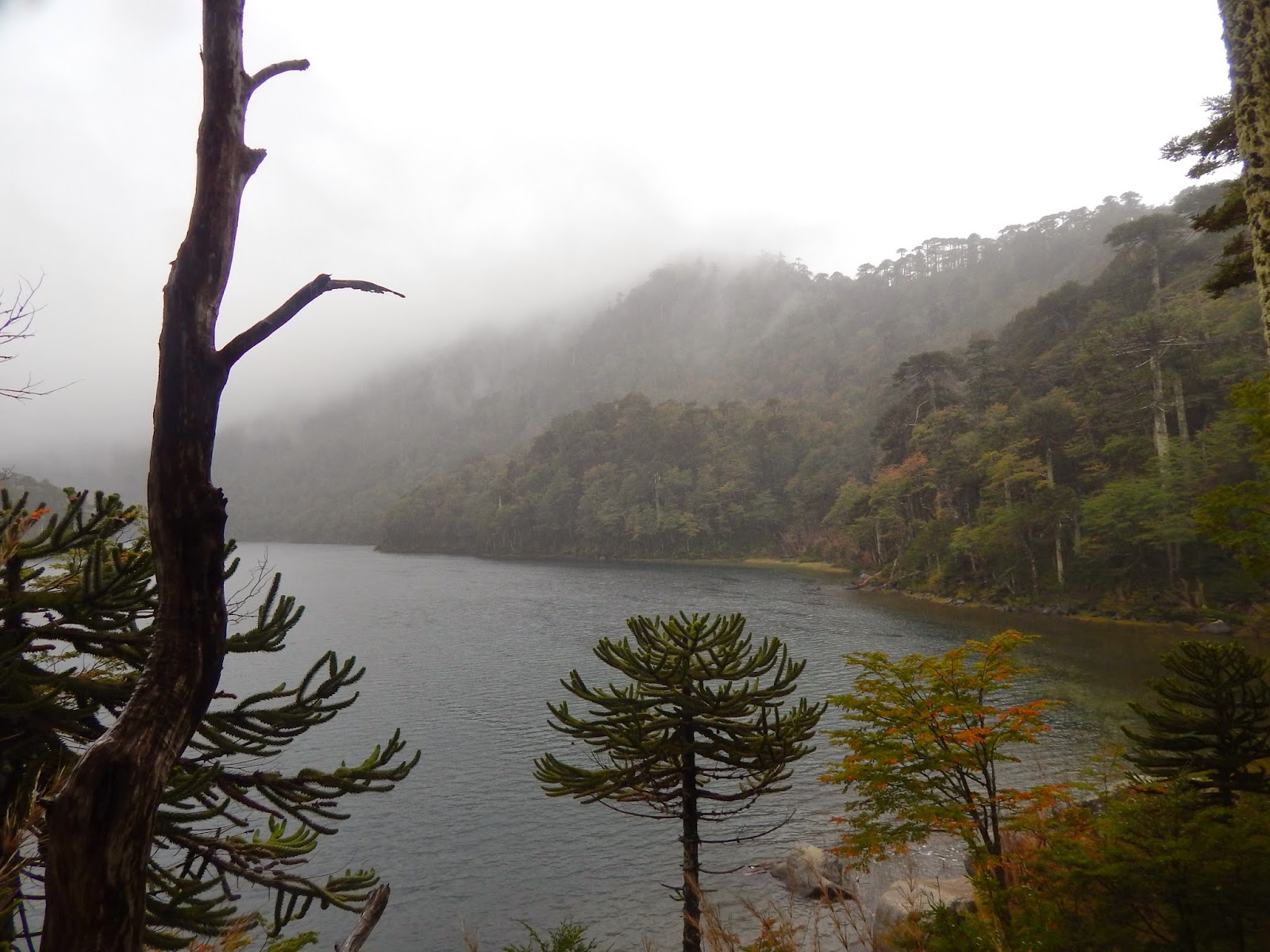 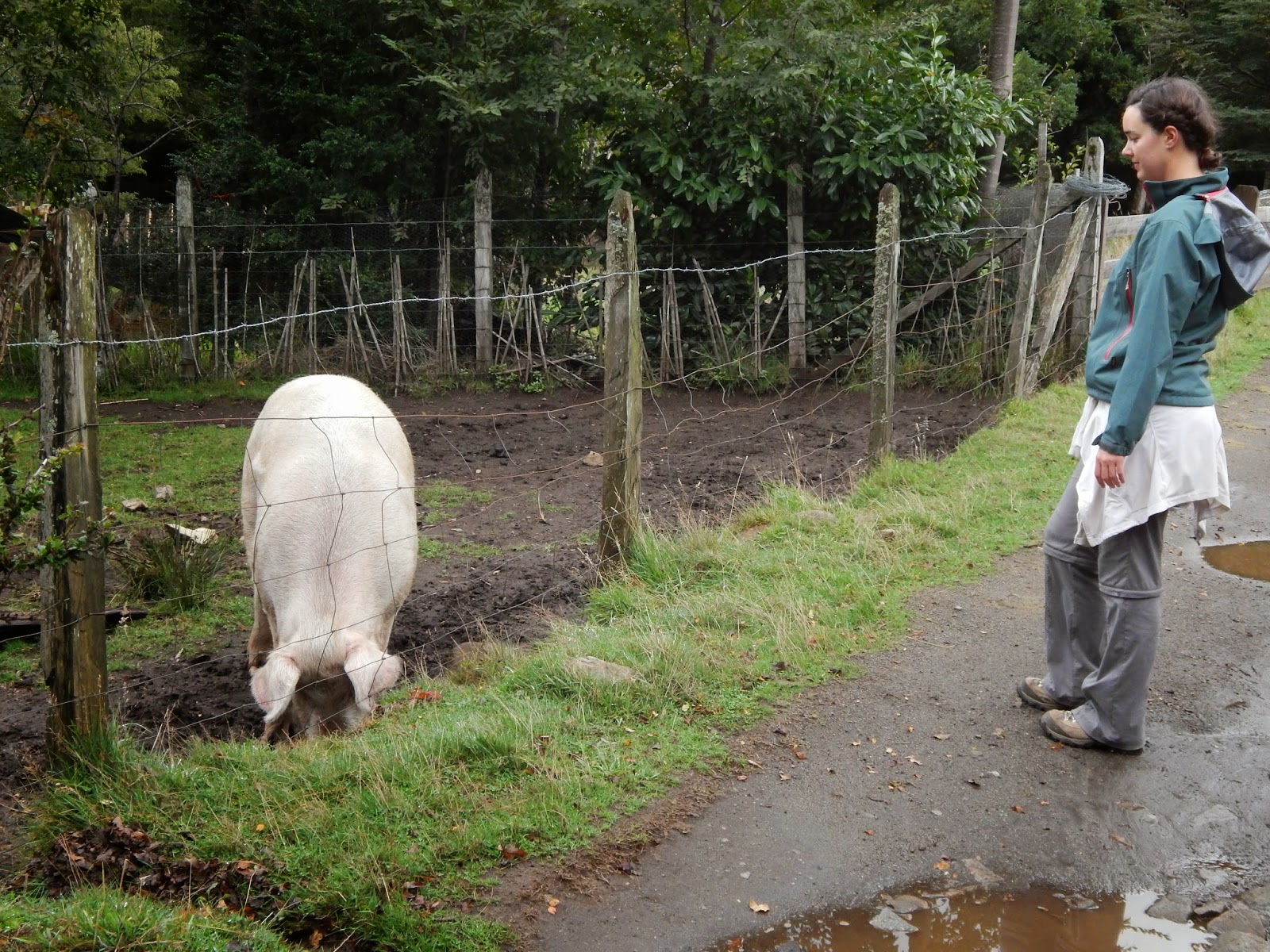 On a last note, we'll provide you with some strictly logistical information in case you're interested in this hike. The Lonely Planet gave appallingly inaccurate information, and although the NP is well-signed on your way in, there isn't a ton of information telling distances or lengths of time each trail will take. It's also important to mention that you pay attention to your trail hiking in, as signage approaching out of the park is infrequent. Hiking at a steady rate with a 5-minute break at each waterfall, and a 12-minute break for lunch at the mirador, we took: 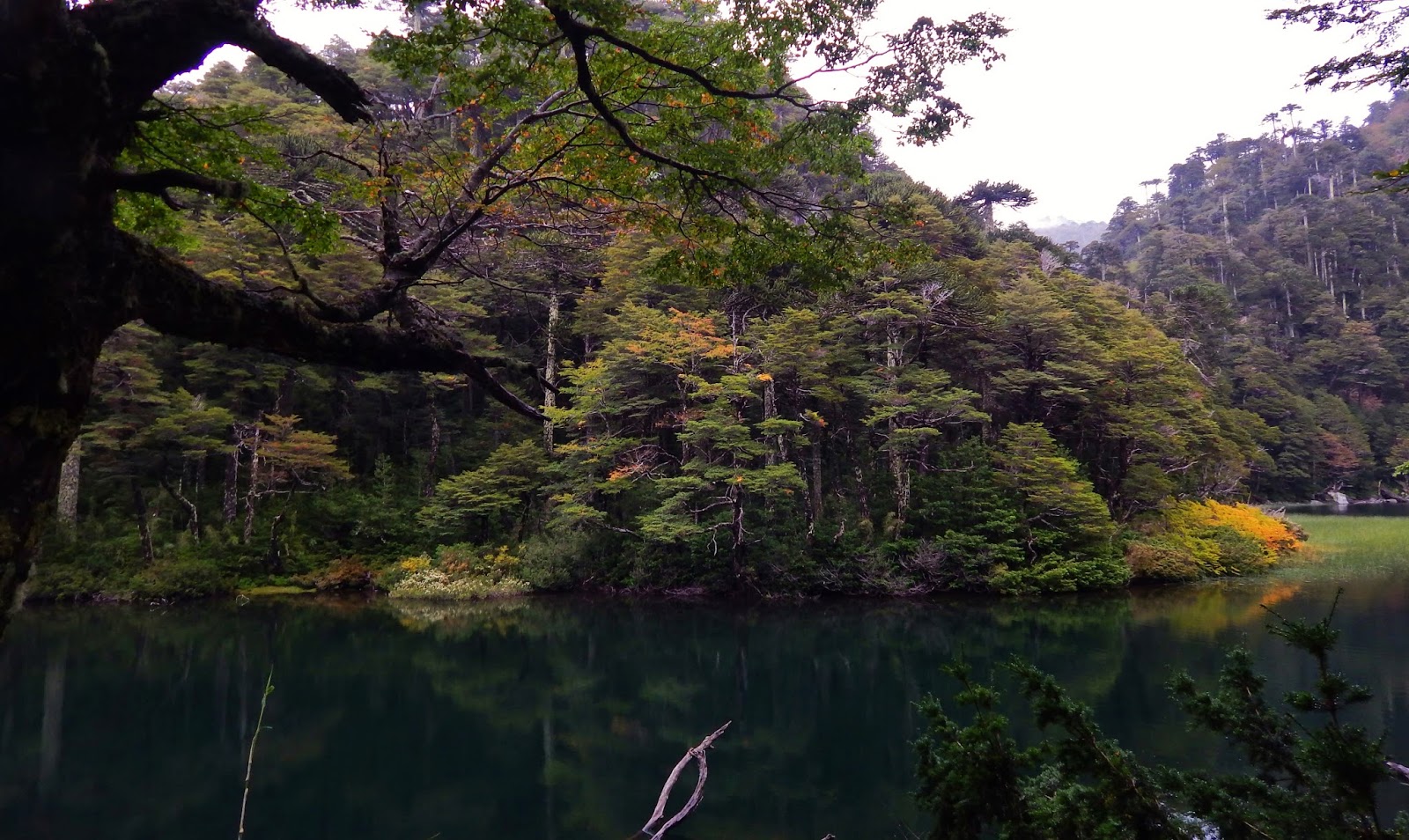