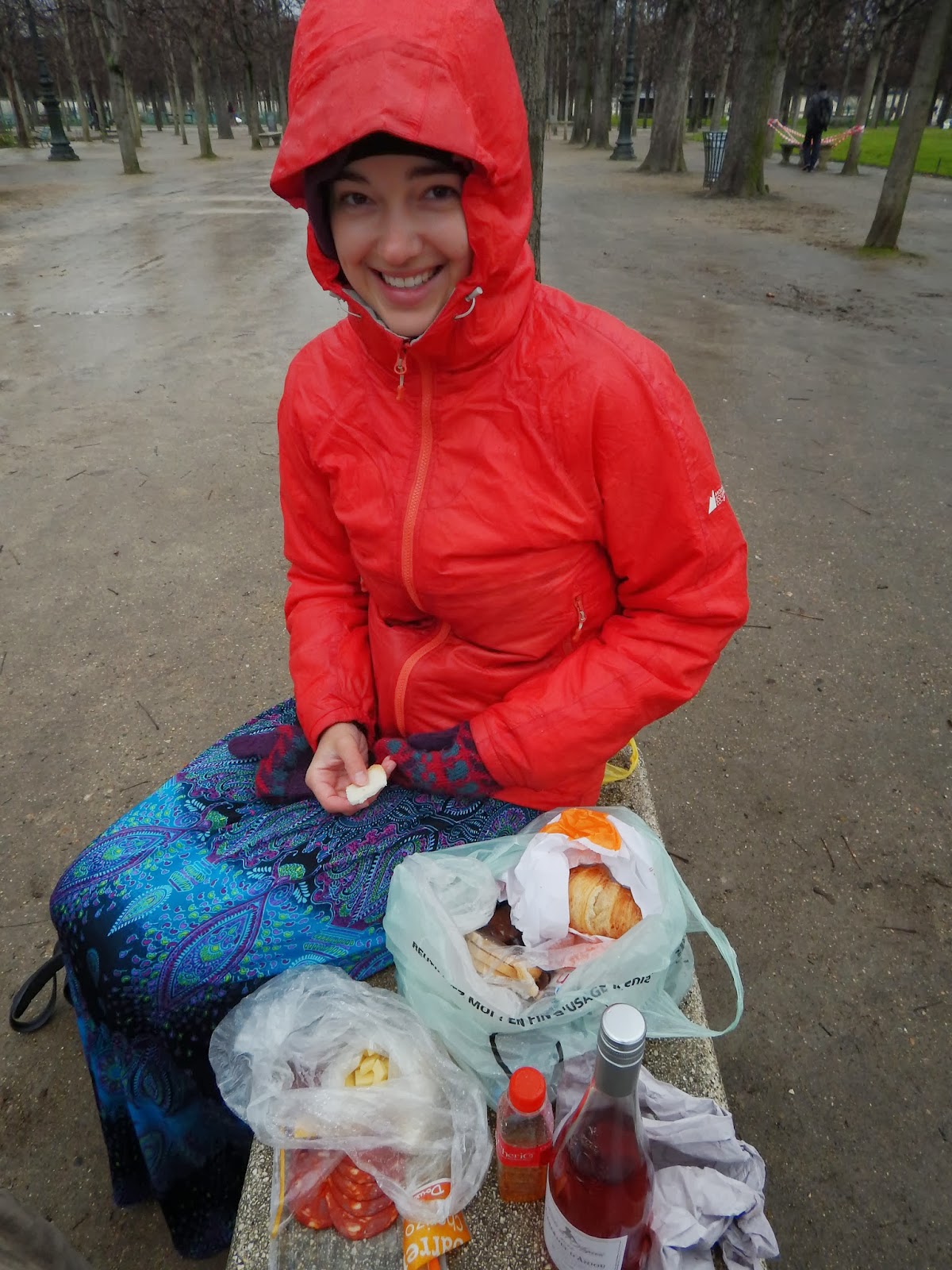 Having the major sites under our belts, we endeavoured to spend the last few days basking in the glow of the city. This turned out to be good and bad because the weather took a turn for the worse. The warm winter wind we'd experienced on the weekend (with highs around 10 degrees) disappeared and we met the weather we'd been expecting: drizzly, chilly, 4 degree highs. It dampened our spirits a little, but we tried to persevere, including a picnic lunch on Days 4 & 5, one in the gardens outside the Louvre, the second looking up at Sacre-Coeur. It helped to be able to consume a hearty amount of wine to stay warm. The good side of it all was that we'd gotten our fill of walking around the city during our first two days, so we were content to sit indoors and admire the views.

After our frigid lunch in the gardens, we joined the queue in the Louvre courtyard and headed down into the pyramid. We mapped out our route (it was maybe a little on the thin side, but our feet weren't up for hours of museum walking), and started off to admire some Greek and Roman sculptures. We laced our way through exhibits, up grand and secretive staircases, and took moments to sit and appreciate masterpieces. Disappointingly, the Winged Victory of Samothrace was under restoration. But we did manage to spend a lovely few minutes in front of Venus de Milo. 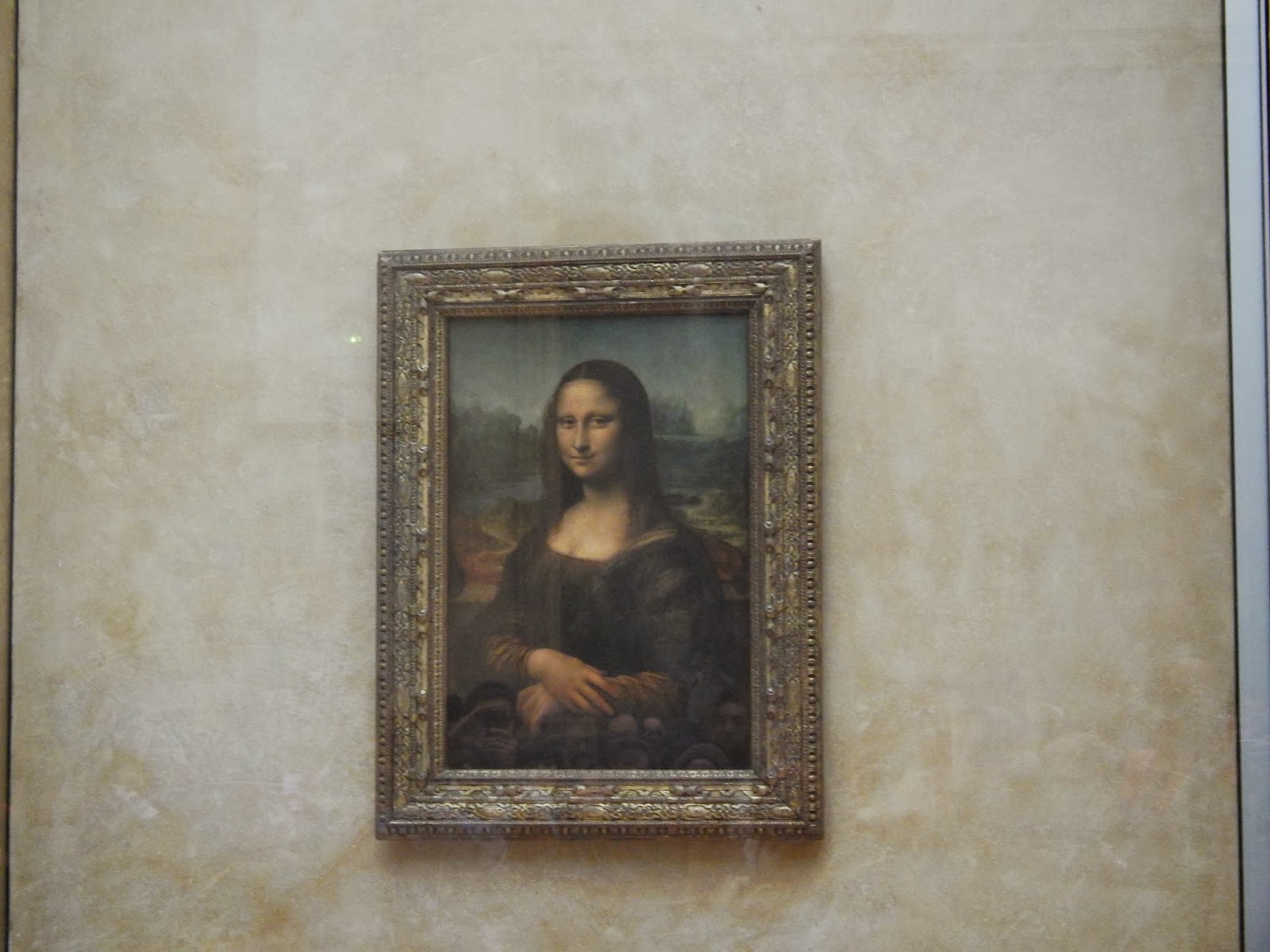 Up on the second floor, Erin once again had that feeling of familiarity. Turning the corner that led down a long open corridor brought back memories of Mr MacAleese's Grade 3/4 class when he shared his pictures from his summer trip to Paris. She knew what was right around the next turn. A large crowd had gathered, people waiting patiently for a turn in front of La Joconde. Large, abrasive signs denoting pick-pocketers in the area contrasted sharply with the soft lines and small frame. Our time in front of her was brief, then we skirted the crowd and sat for moment to rest. Unfortunately, Craig was graced with a present someone had left behind on the seat: a long stringy piece of gum. 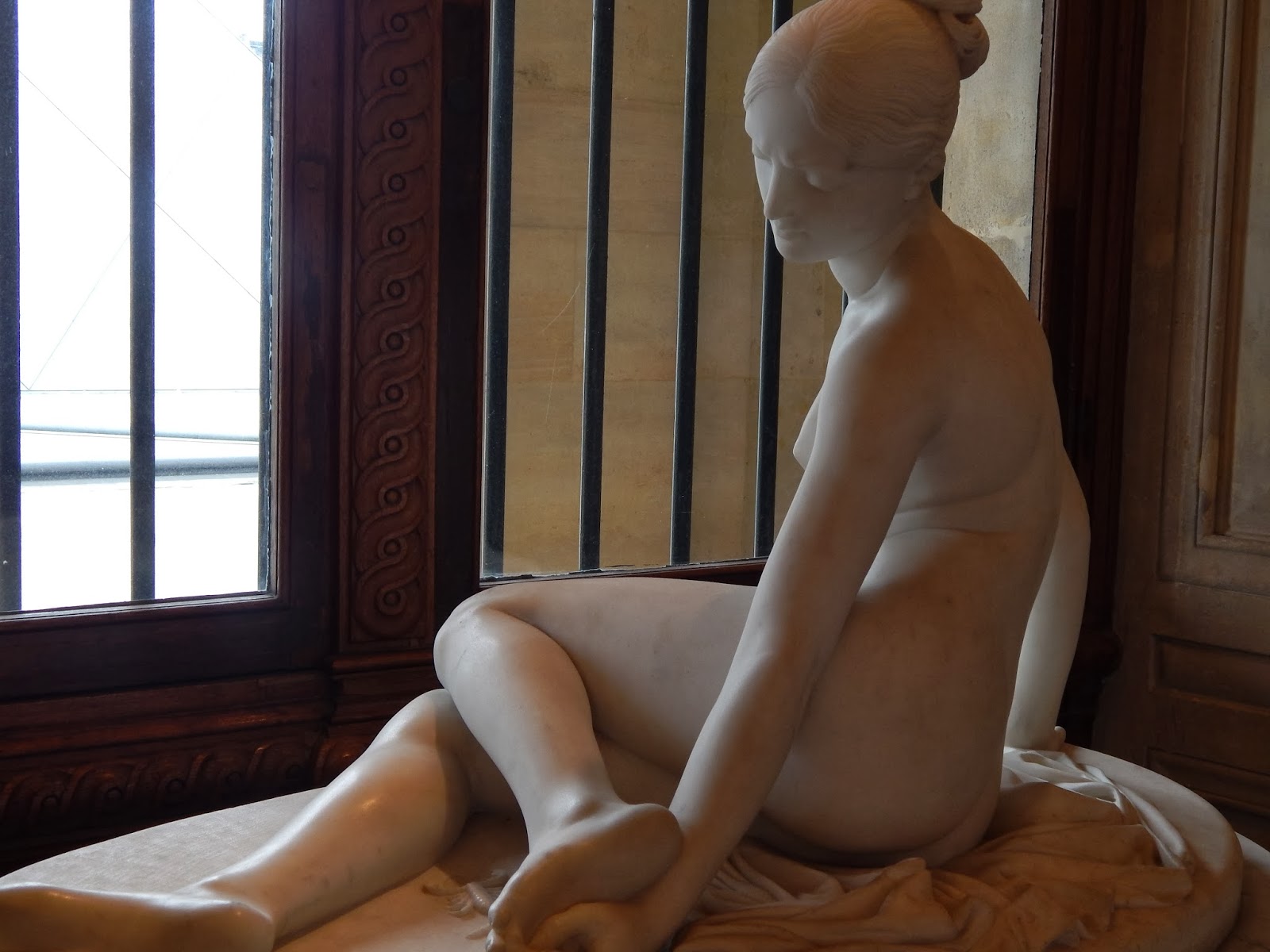 On Day Four, we chose Sacre-Coeur as our picnic destination. In one of the most disturbing moments of our trip so far, a group of men tried to corner us on the way up the hill, one grabbing Erin's wrist tightly attempting to put on a bracelet. It took a struggle and some harsh words in French, but the duo eventually was reunited on the other side of the group, thankful for their CAA backpack that kept their belongings safe from the clear scam. We shook off the moment, focused our attention on the beautiful building above and occasionally glanced back at the group, amused to see them scatter anytime a policeman rode by on his bicycle. Needless to say, we found a different route back down. 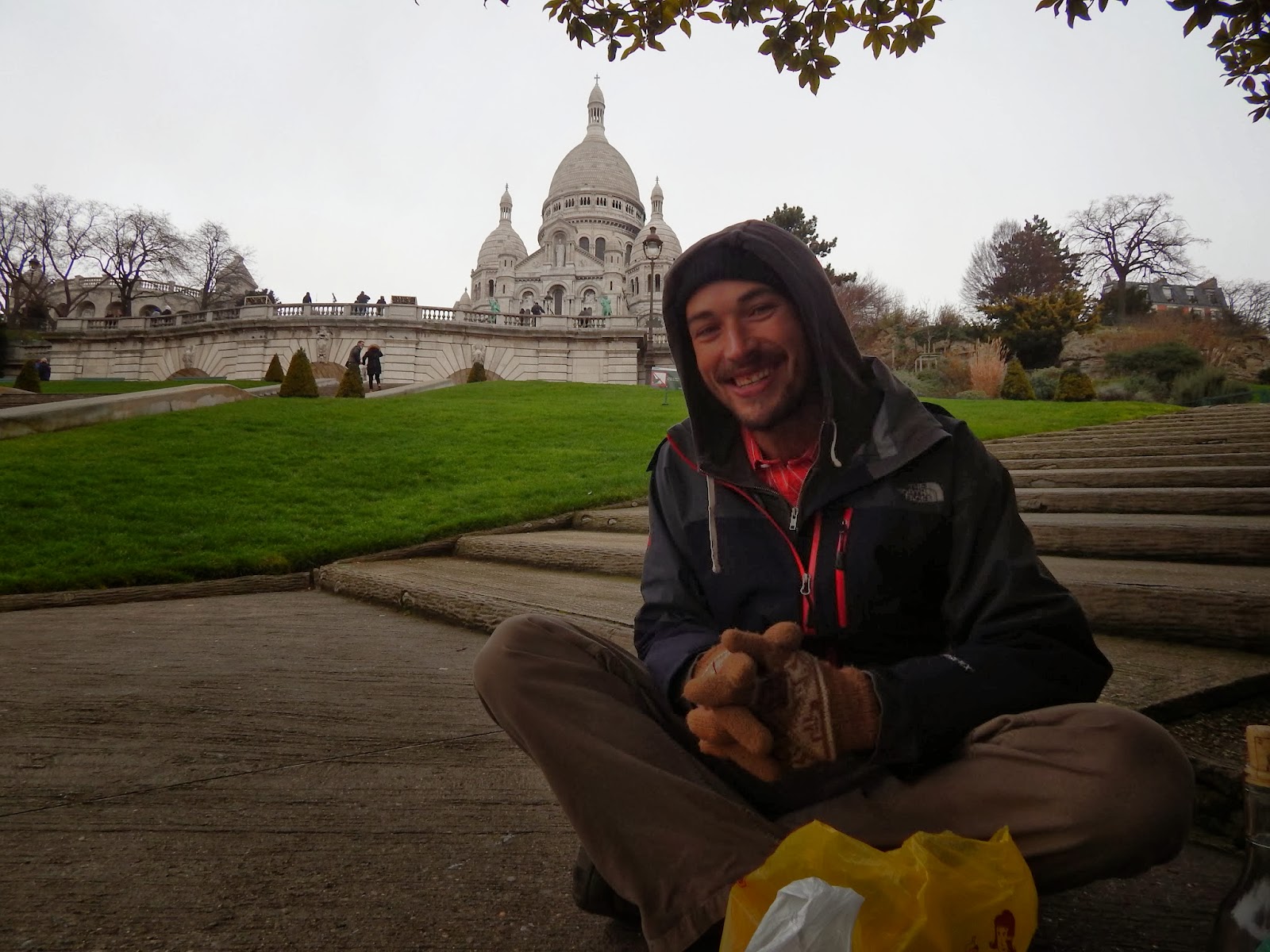 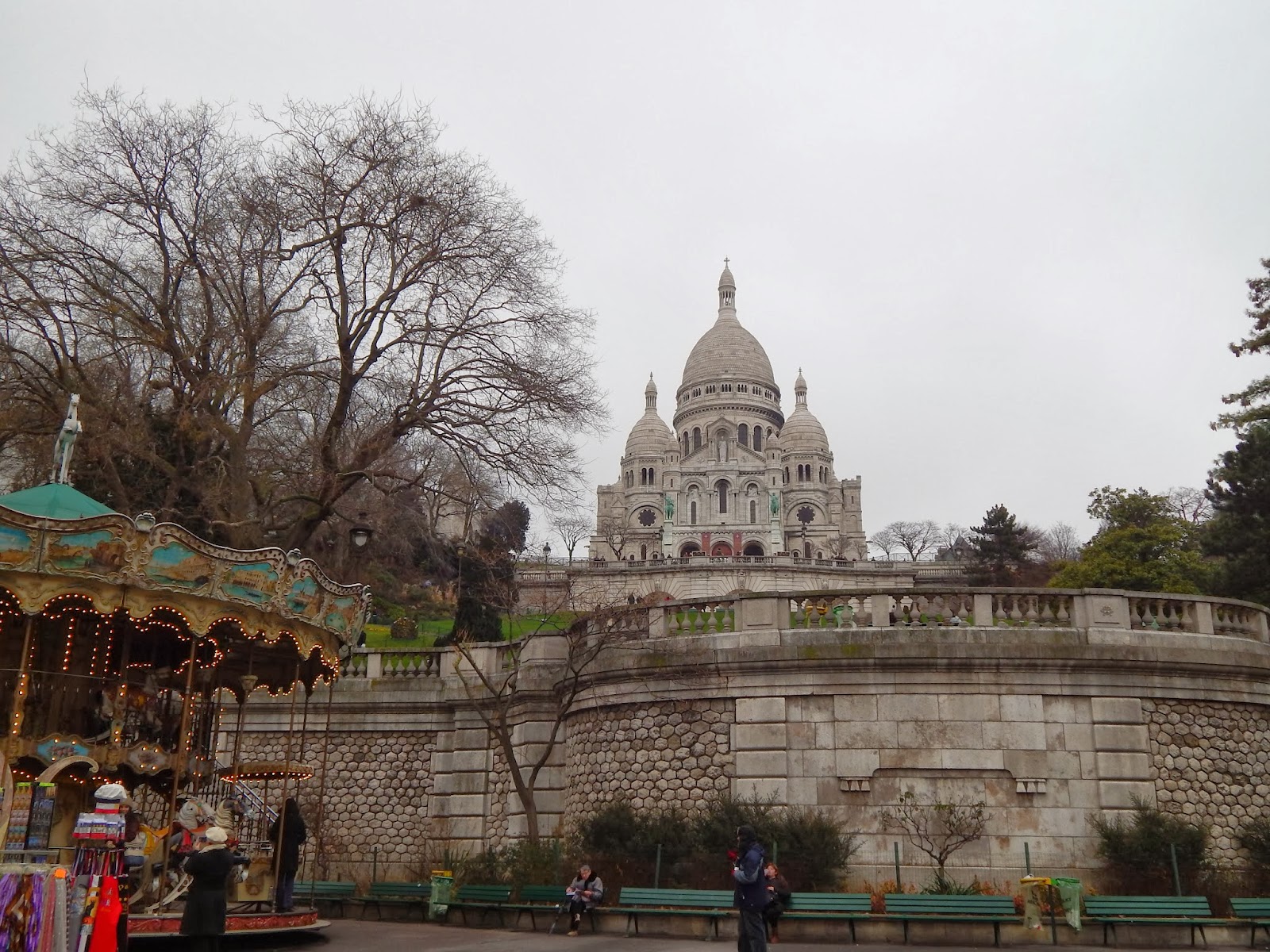 After lunch, we got up close and personal with the Arc de Triomphe. The carvings were quite impressive and the grandeur was as expected. Going up it was a little pointless, given the fog and rain that had rolled in, so we admired the Champs from the ground, appreciating the view of the Ferris wheel at one end, and the Grande Arche at the other. 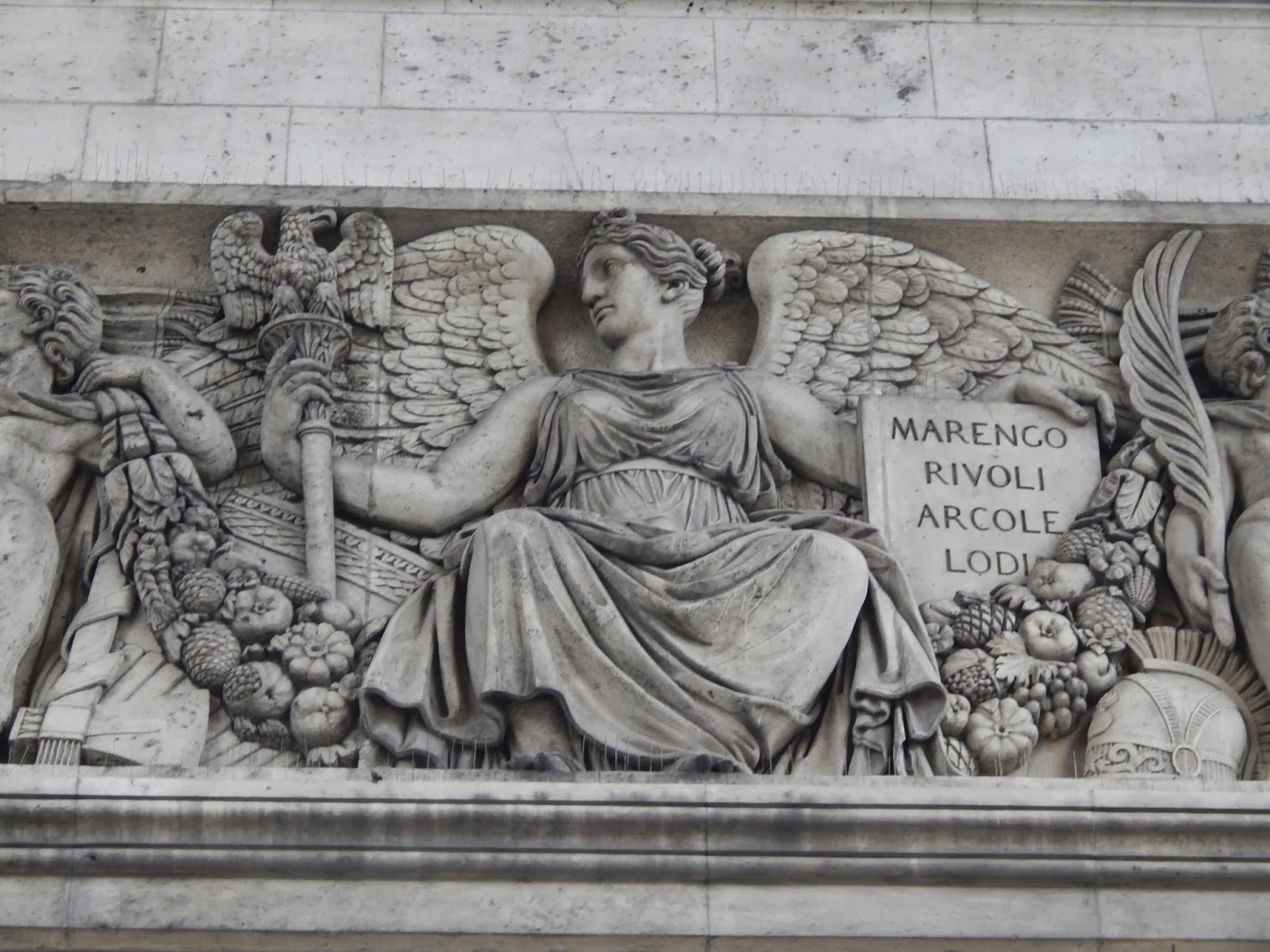 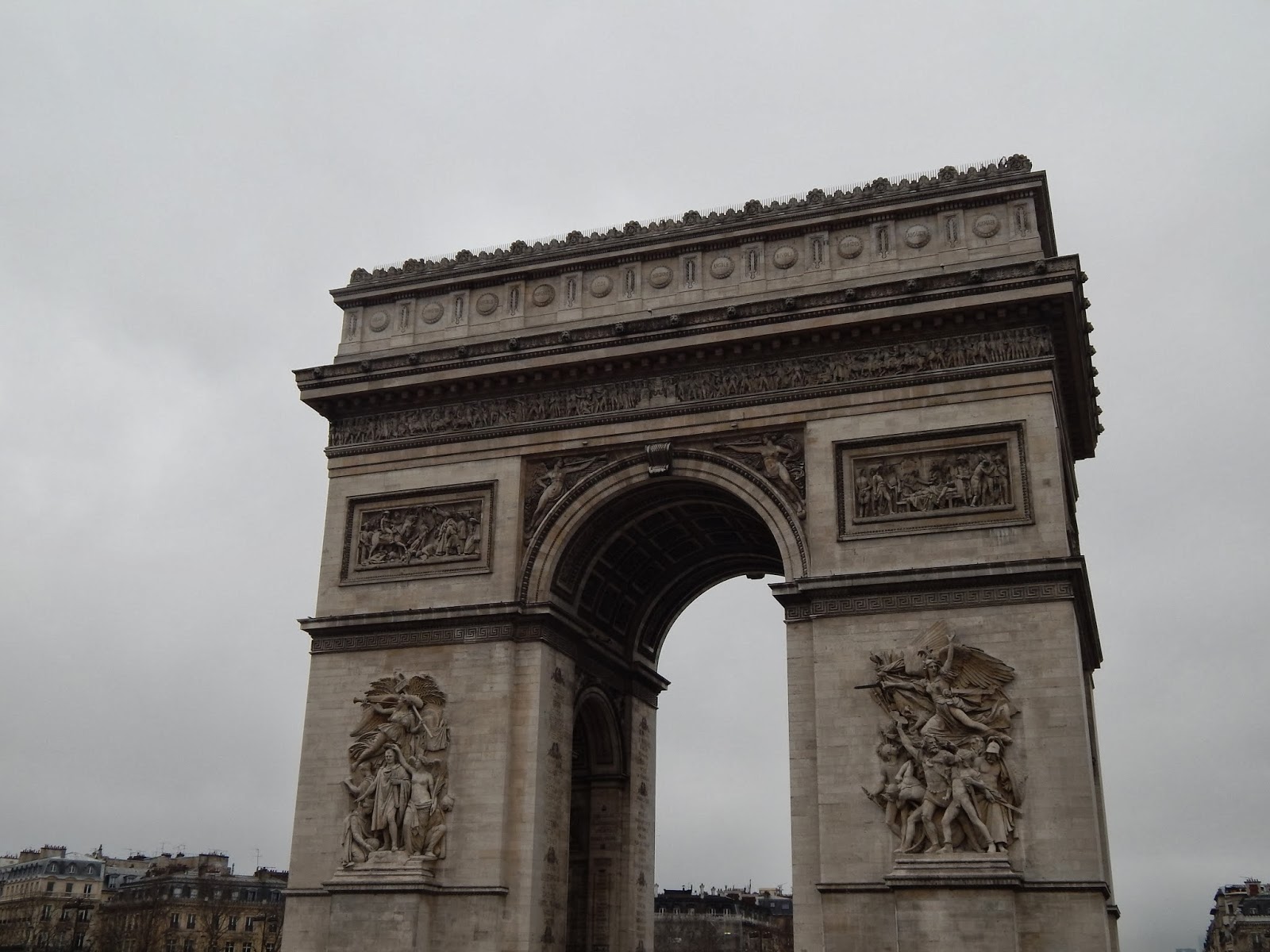 Lastly, we attempted to find a wedding dress for Erin, who was eager to bring back a dress from Paris, but alas, most were too expensive, and those not looked too cheap. So to improve our moods, we headed to a part of town known for its flourishing skirts, to a little place called Le Moulin Rouge. We found a quaint cafe for a demi-boteille of red gamay, played a round of cribbage and called it a night. 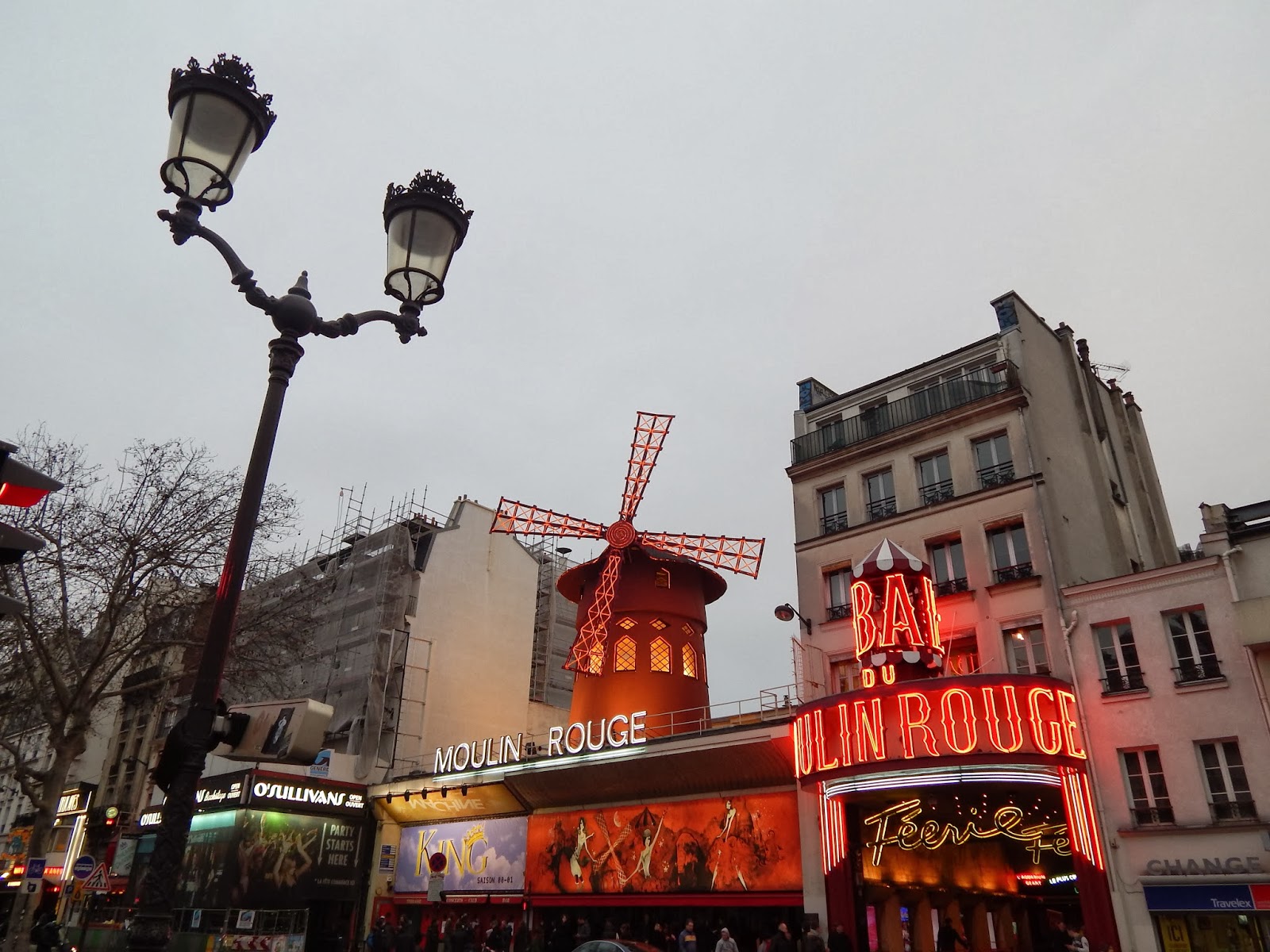 Email ThisBlogThis!Share to TwitterShare to FacebookShare to Pinterest
Labels: 13. France