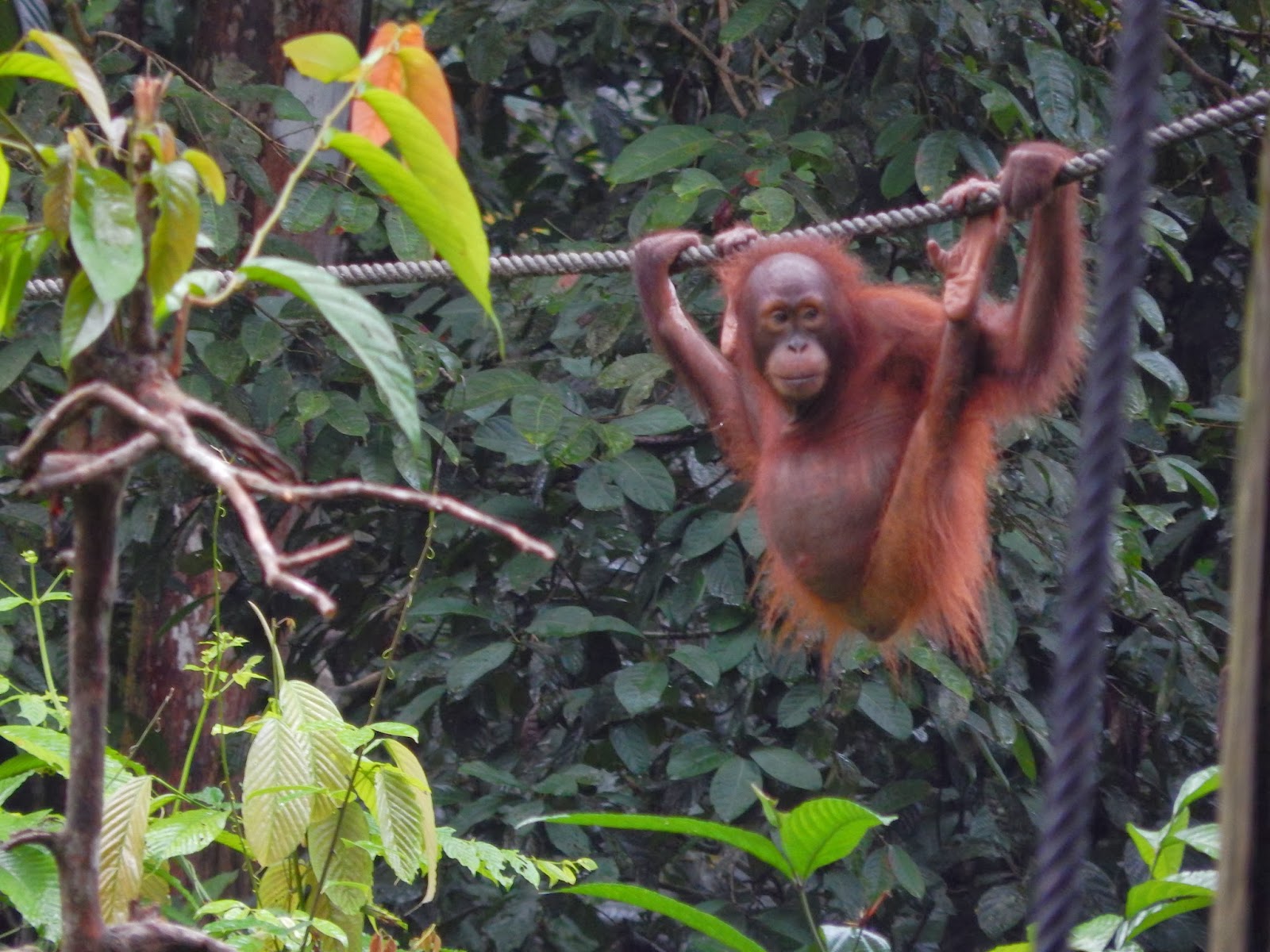 We arrived in Sepilok to a blanket of stars above us as we crossed the slippery boardwalk in search of our room. After some confusion we were settled and bid goodnight to Diane. From her room it was a substantial hike in the darkness. Our guide, the caretaker, pointed out two sleeping hornbills along the way. 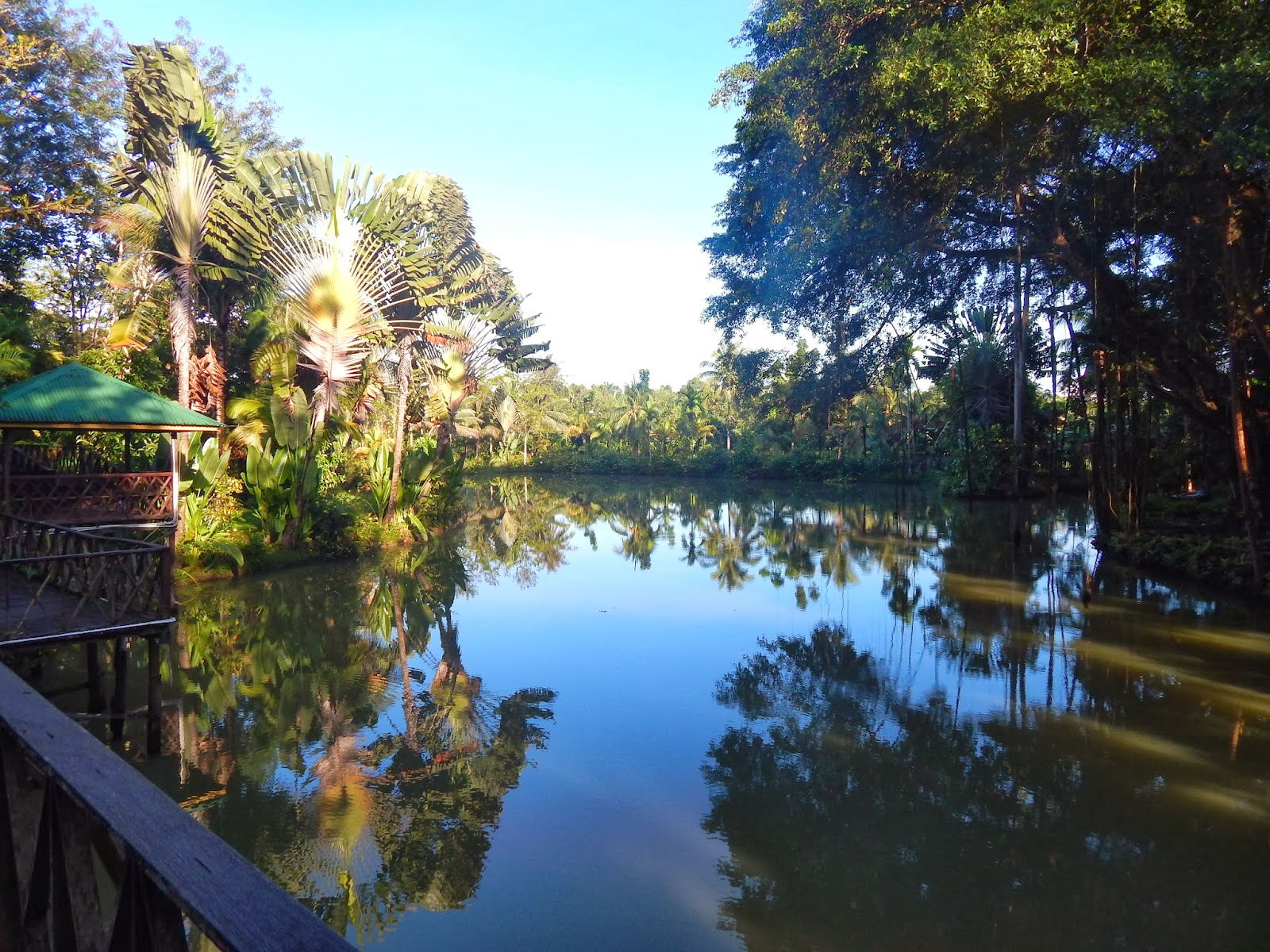 The next morning we awoke to realize what we'd missed in the dark: the grounds were set in the rainforest alongside the reserve. We walked over a lagoon to get to the restaurant and had views of the forest as we ate. It was a mere five minute walk to the main attraction, the Orangutan Rehabilitation Centre, thus a short stroll had us arriving with plenty of time to spare before the morning feeding.


The Rehabilitation Centre is a place for rescued orangutans, mainly those found being kept illegally as pets, confiscated at customs, or orphaned babies from poached mothers. Workers care for the young ones, and nourish them, while also teaching them how to climb and hunt for food for themselves. The orphans are gradually taken deeper into the forest, by this point having been paired up (weak climbers with strong ones), and when ready, they are allowed to come and go as they please into the forest. At this point some never return, preferring to live in the forest while others take longer to be weaned off of human assistance. 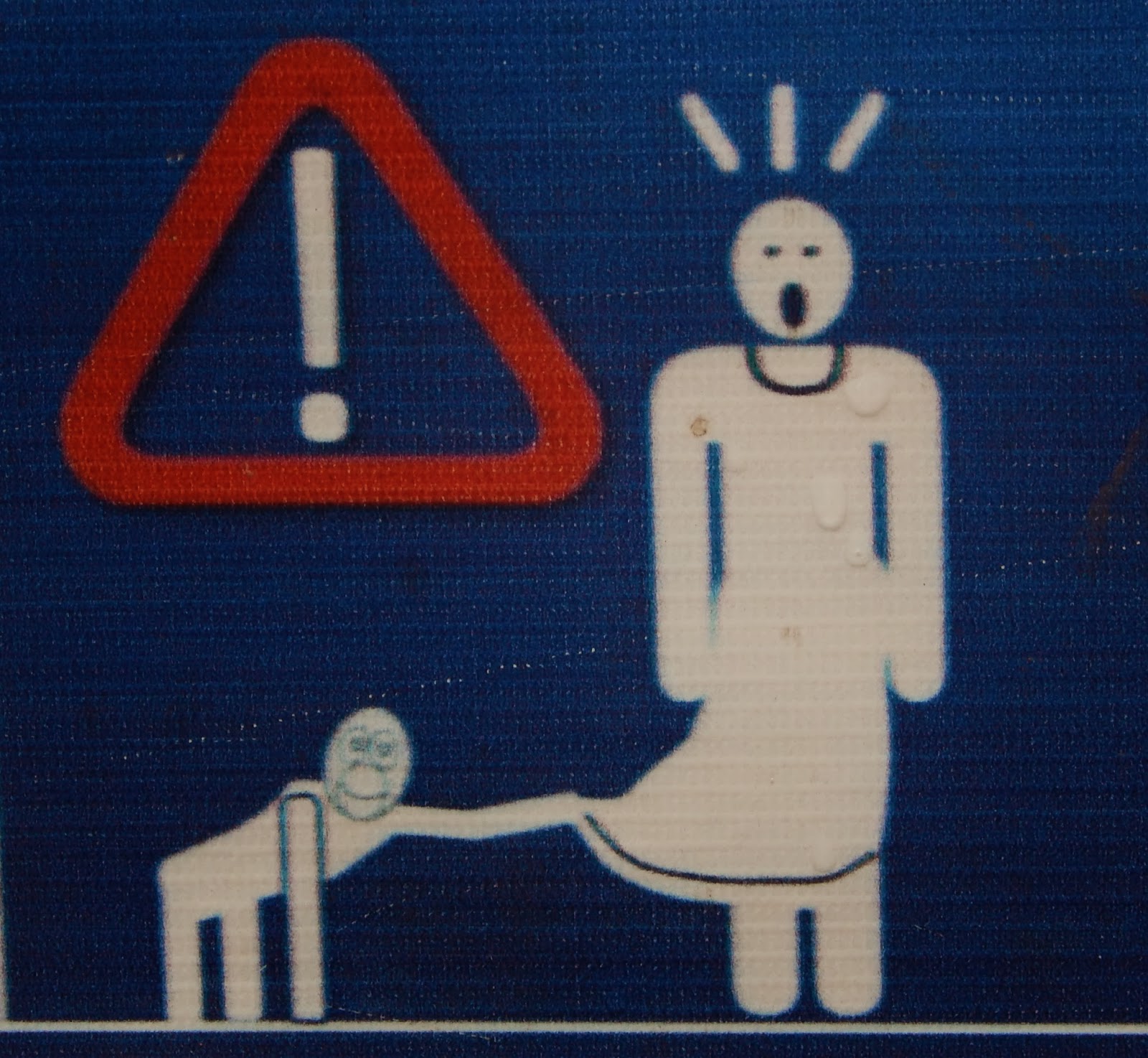 The Centre puts out food twice a day in order to supplement the diets for those still struggling to forage independently. They claim to provide 'boring' food so that the apes are encouraged to find their own, but it sure looked like a variety of juicy treats to us! The orangutans are free to come and go as they please, so seeing one is not guaranteed.


We took in the pre-visit video, an amateur production with overly dramatic voice overs. The shots of people walking still had the audio full of harsh wind sounds, when there was no reason for any audio from the clip. And the lasting effect of the video was that we were less happy with how the infant orphans were treated. They appeared to be caged in 'prison cells' more than be provided with stimulating homes.

Thankfully through the video, we were on our way with hoards of other visitors along the boardwalk to the feeding area. 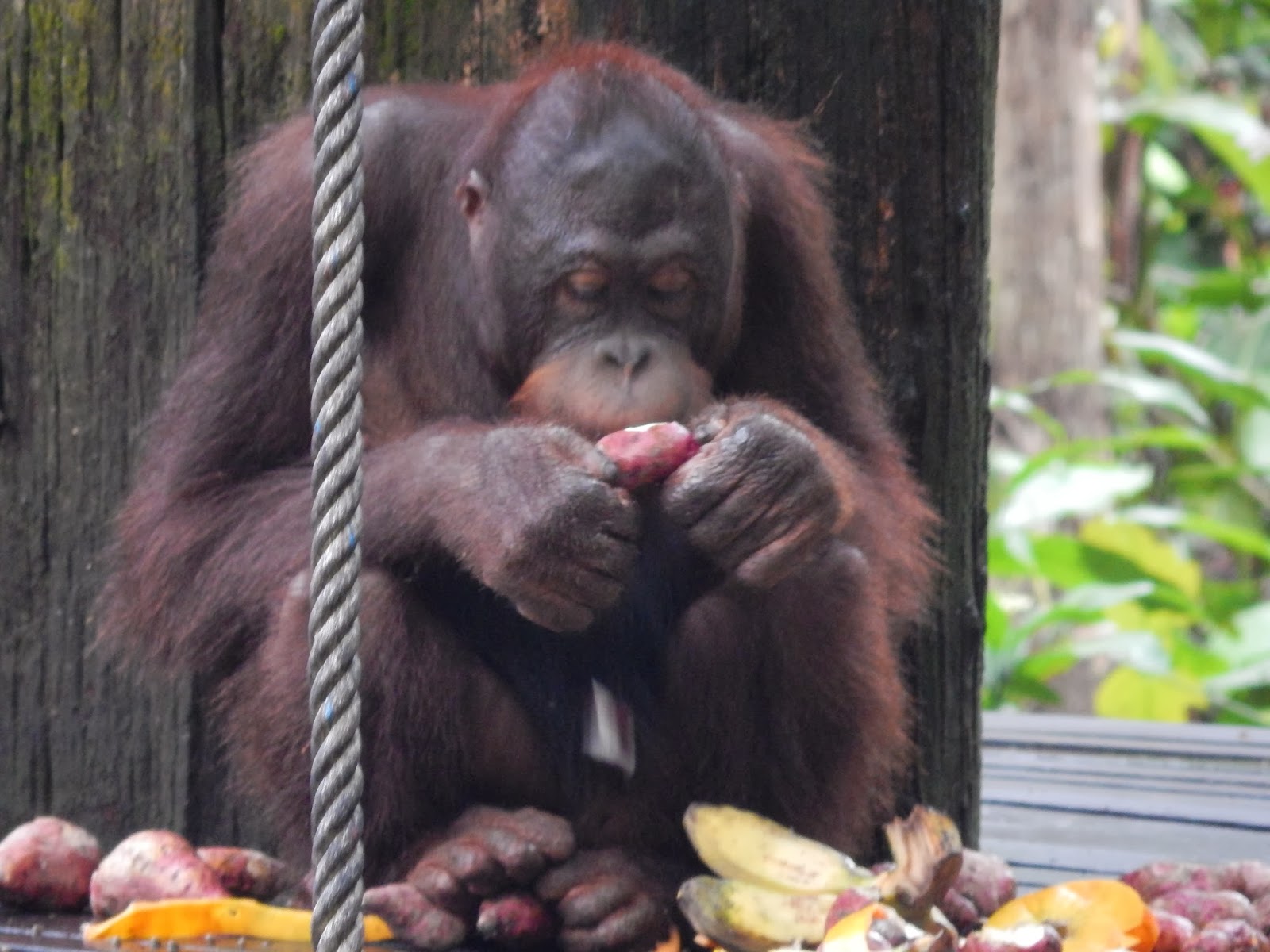 It didn't take long for Erin to spot an orangutan sitting in a tree far above the viewing platform. Then moments later, a rustling in the bushes nearby revealed an employee carring a woven basket full of fruit, with a small orangutan following behind him. He carried it to the platform above, and dumped the treats out. Knowing that the Centre is trying to wean the orangutans off dependence on humans, we were confused why the worker stayed sitting there for a half an hour, and why he insisted on hand feeding some of the orangutans. 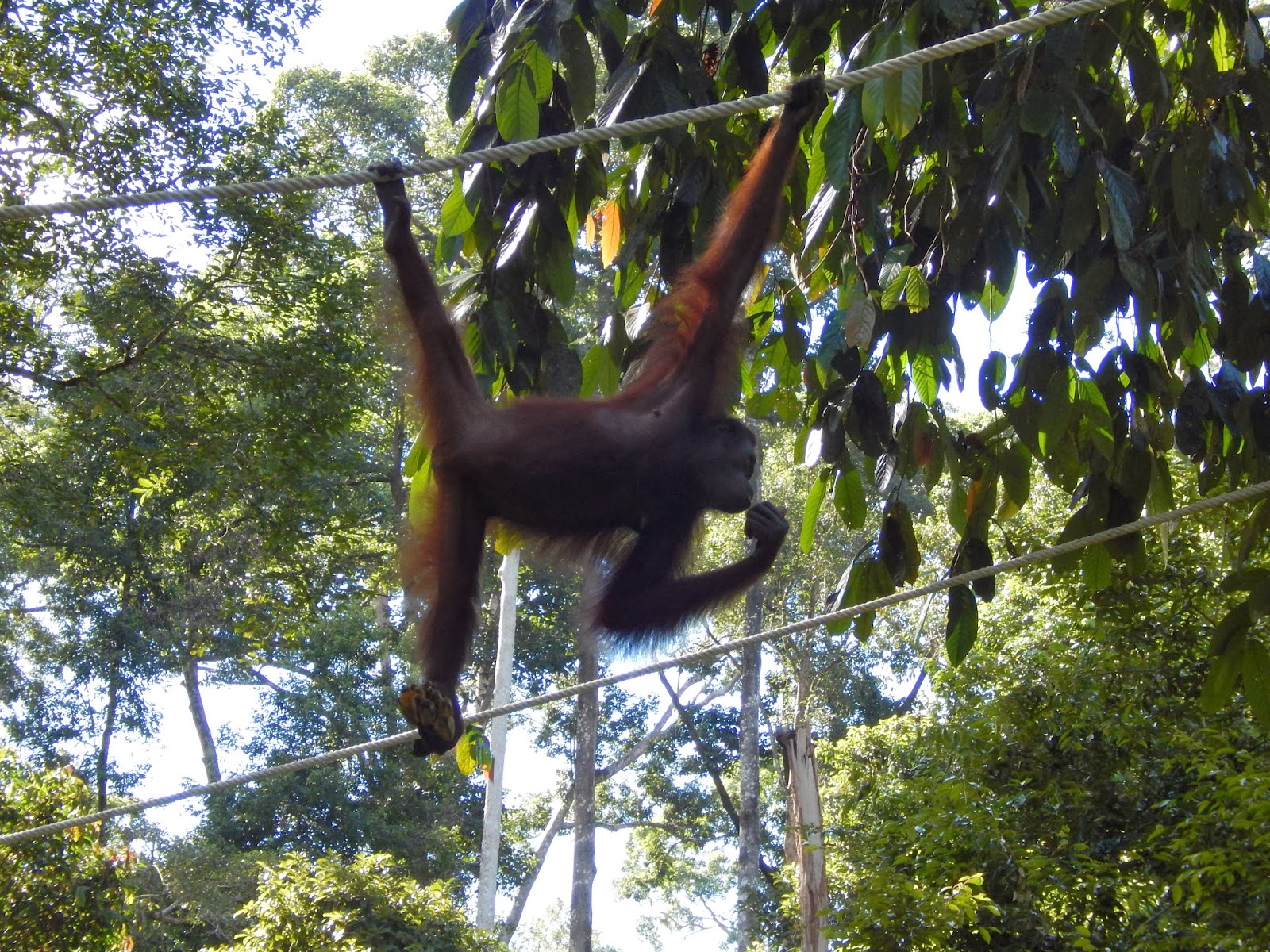 Despite this, and the noise the crowd made, it was spectacular to see the apes come swinging in, land with ease on the wood, grab a handfull of bananas, and settle into a ballerina pose on the ropes to eat. They'd hold the bundle with their toes, while bringing them one at a time to their mouths to eat. Their flexibility and grace was astounding.

A murmur went through the crowd as the far-off rope started to bounce. We knew another orangutan was coming. With a collective gasp, a huge male broke through the foliage and lumbered its way to the platform. The keeper calmly handed it a bunch of bananas and it climbed to a position of power above the young one that stayed behind. 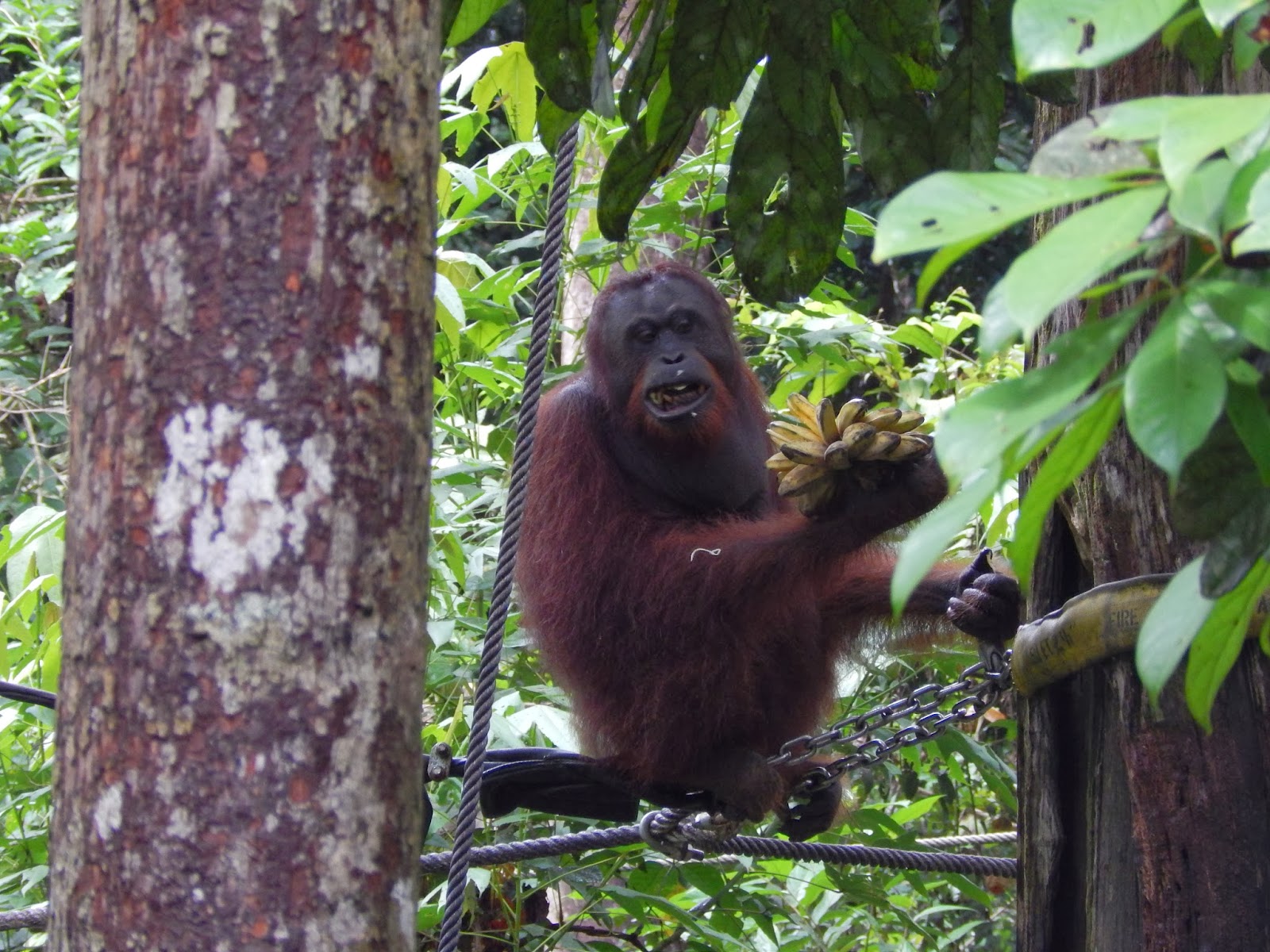 We all laughed when long-tailed and pig-tailed macaques scurried over to try to feed, too. They would comically rush forward when it seemed the apes weren't looking to snatch a banana or two, then would scramble up the vines. But surprisingly, the orangutans didn't seem to mind. 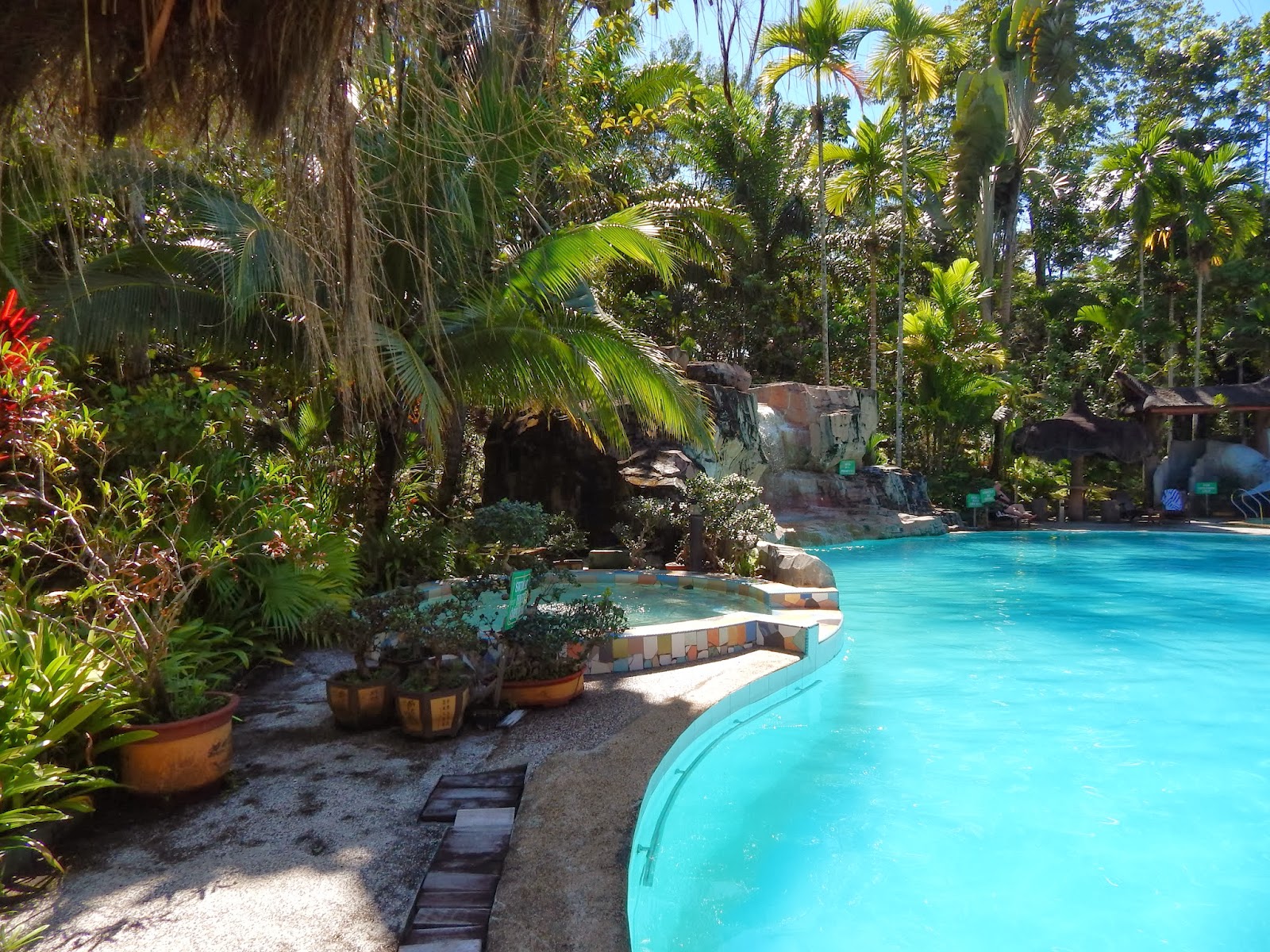 Slowly, the tour groups left, then one by one the orangutans swung out of view, and we were left in the drizzling rain. We headed out for lunch and a swim at our scenic pool, then returned for the 3:00 feeding. We arrived well before the start time, but already there was a crowd with cameras out and trained on the platform. A mother, who had grown up as an orphan at the Centre, was sitting patiently with her little baby. It was a beautiful sight. 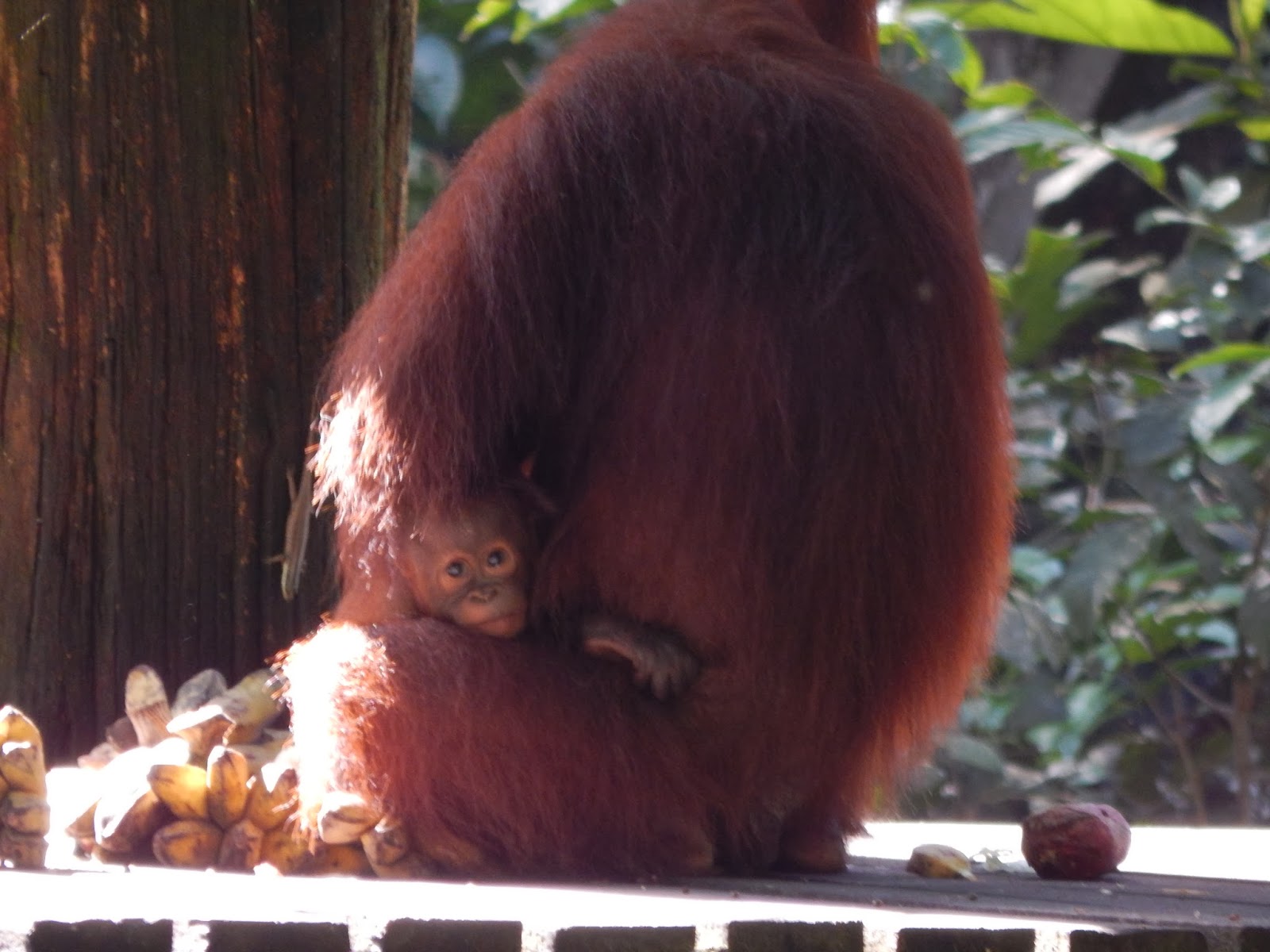 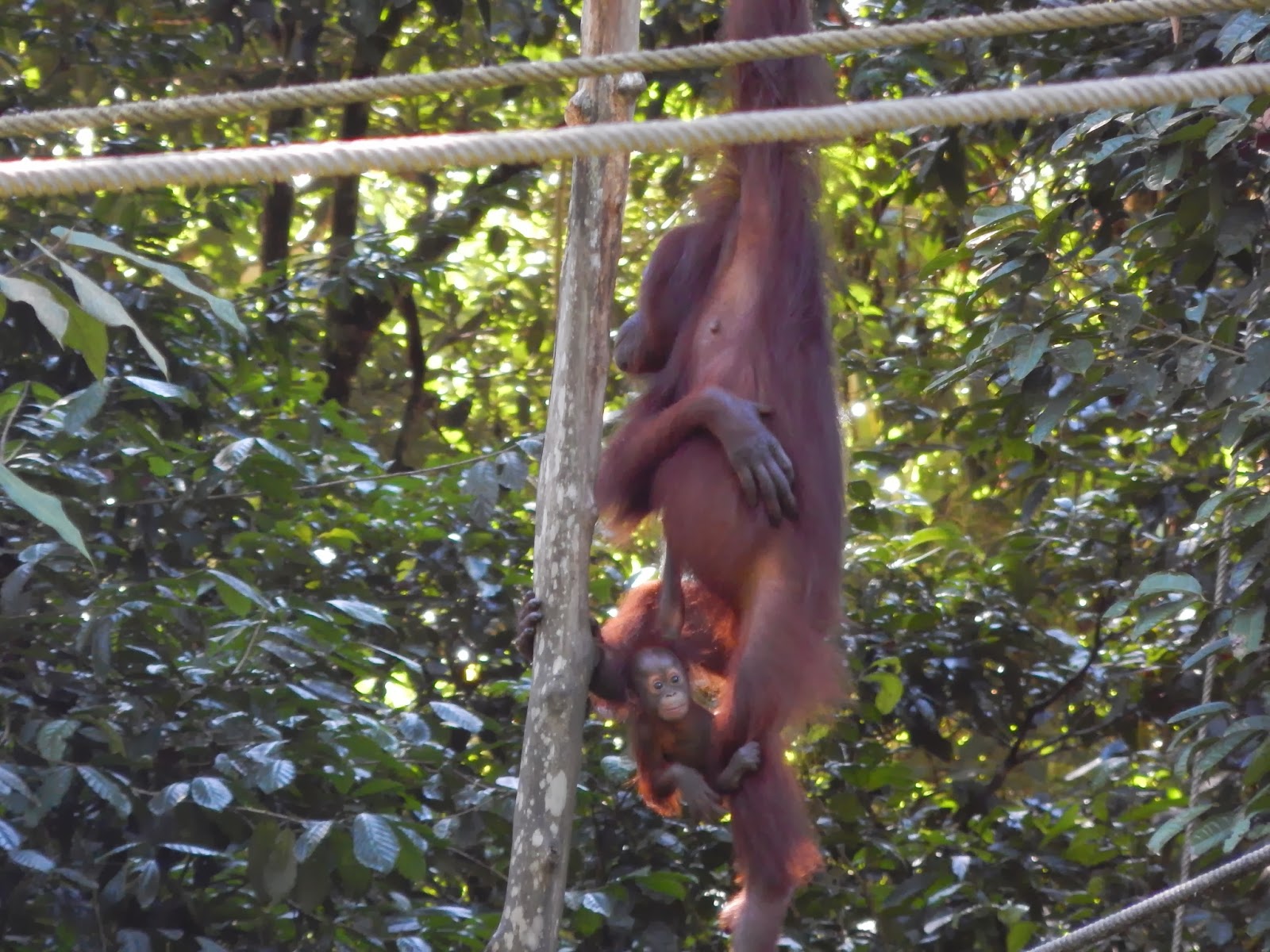 The second feeding had less people, but there were a few families who made up for it in noise. The orangutans didn't seem to mind much, though, and we watched the large male from the morning come and feed next to the female and baby. Diane and Erin were enthralled, watching, when a woman barked, "Pay Attention!" to the crowd. A huge, male macaque came thundering along the railing of the walkway everyone was leaning on. It swept through the trees and was on the platform in moments. 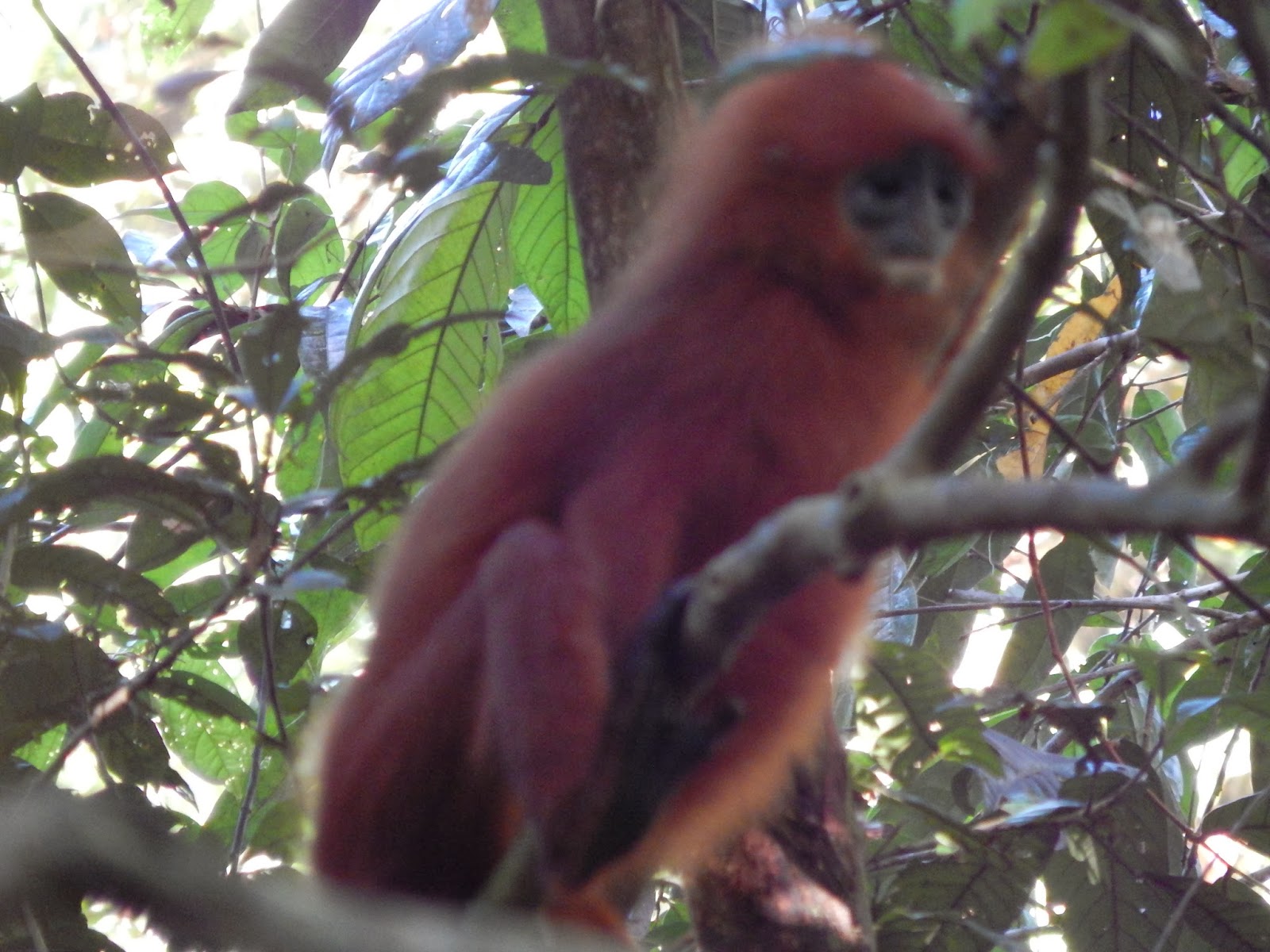 When we were escorted out by the employee on the viewing platform at the end of the viewing, we took our time leaving the forest. Our slow pace was rewarded when Diane spotted a Maroon Langur monkey peering at us through the trees. 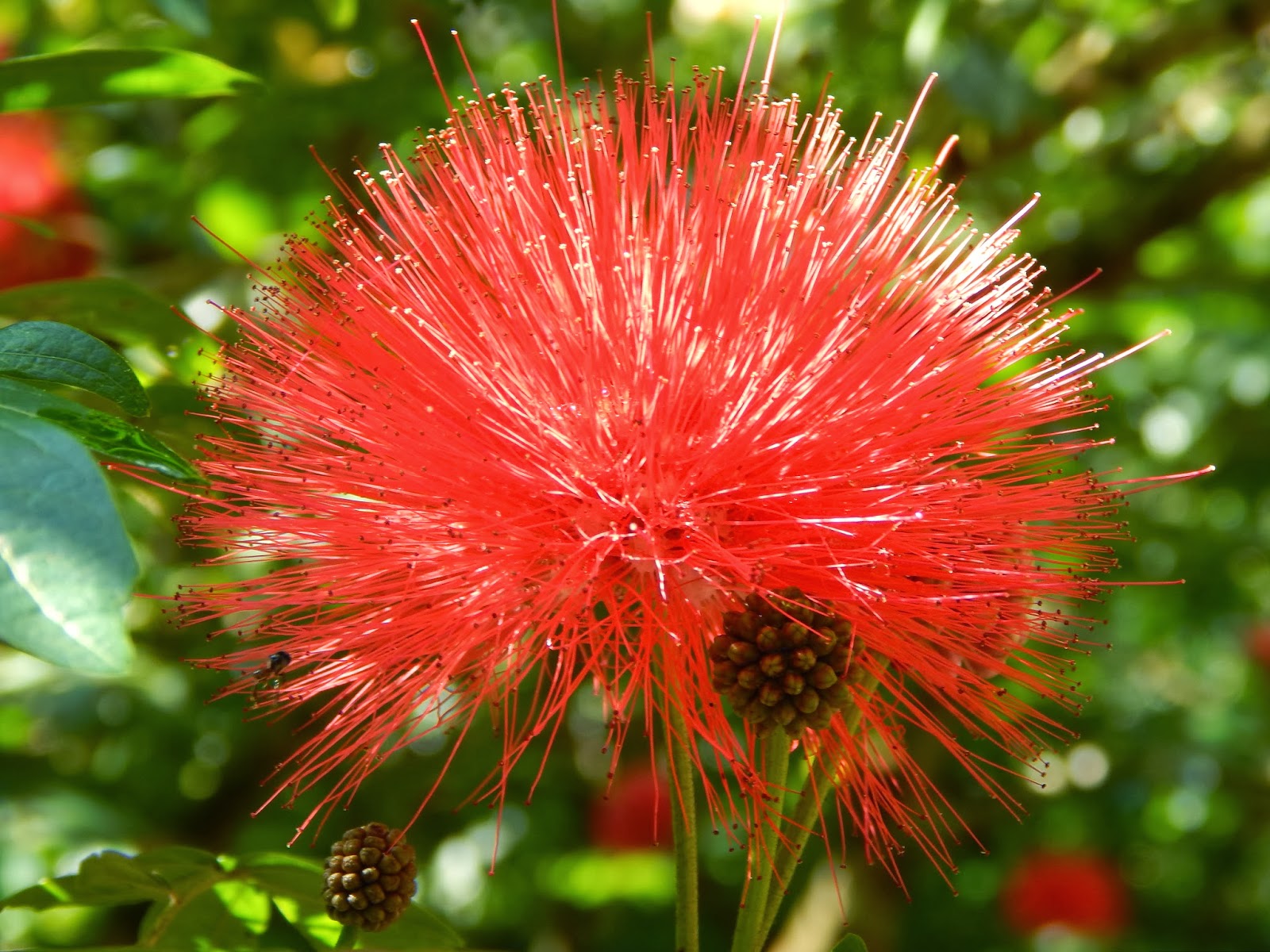 We got soaked that night on our walk to dinner, but it was a satisfying day all the same. We went to bed on the decision to visit the Rainforest Discovery Centre the next morning before our departure, instead of paying to view another feeding. Little did we know, we would awaken to our own orangutan viewing right in our lodge's restaurant! It was neat to the see the orangutan even closer, but sad that most guests didn't seem to get the difference between the Rehabiliation Centre and any human feeding them. Diane got the pleasure of watching the small orangutan rip apart a coconut and eat its flesh. A reminder that these enchantingly graceful creatures can pull a human's arm off with ease. 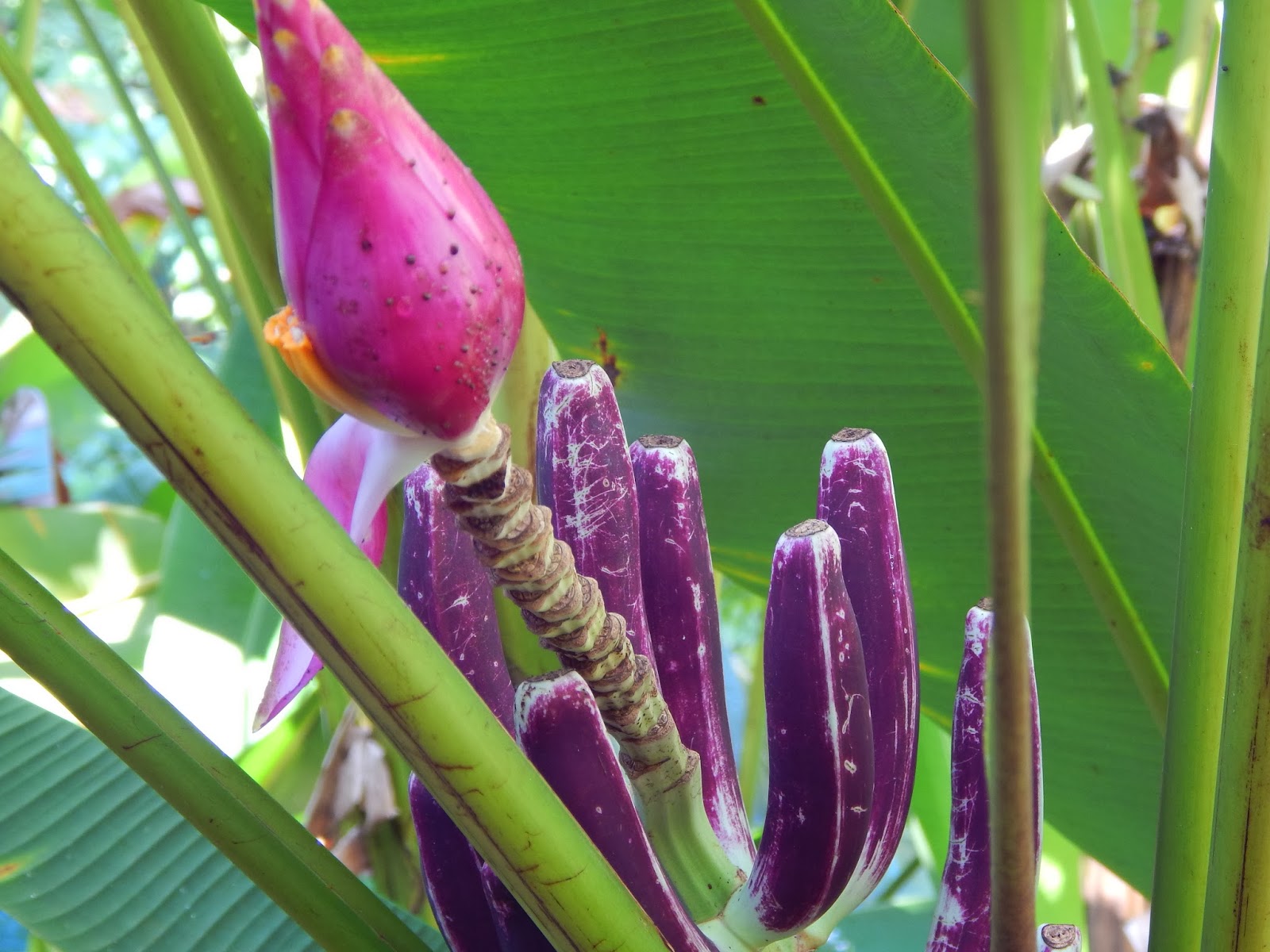 Our morning walk through the canopy was quite pleasant; the peaceful silence of nature was a nice change, but didn't offer us any wildlife sightings. We were pleased to have had the amazing opportunity to see orangutans so closely and so active in Sepilok, but were even more excited for the river adventure awaiting us in Kinabatangan. 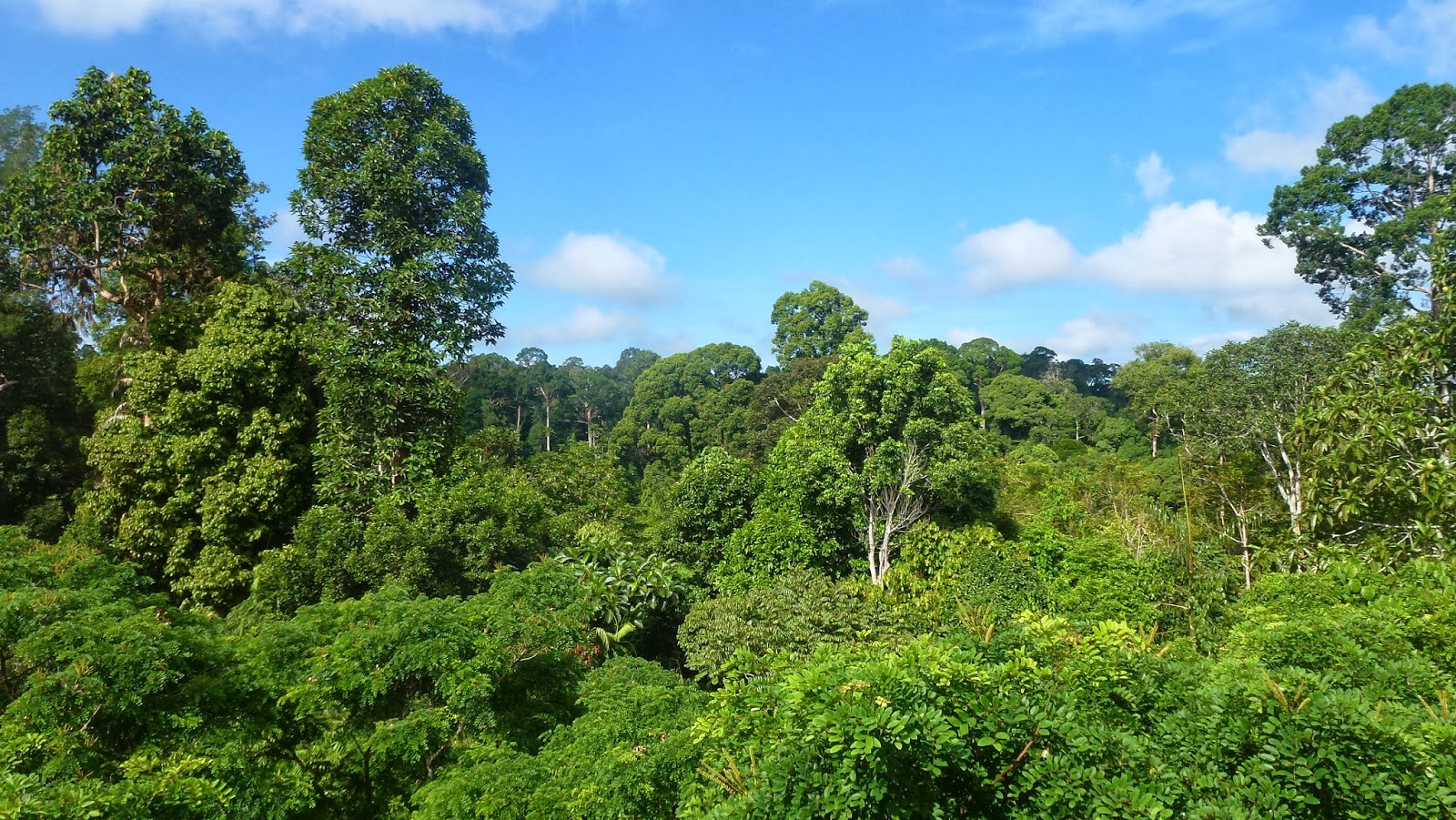