Electing to have another relaxing morning in Udaipur, we caught the afternoon bus to Amdavad (Ahmedabad) getting in just as the sun set. We found our hotel down an alley flanked by shady warehouses half full of non-descript boxes with half written signs directing you up narrow dark stairways. Clearly hesitant about what our hotel would be like, we were surprised to walk up the steps to something sleek and modern, with decorating ideas we may even take away  from their lobby. The room was equally modern and we happily wiled away another night with some bad movies and delicious food thanks to the restaurant downstairs.

In the morning, we set out trying to avoid the heat to see one of the best examples of a Gujarati stepwell. Craig had practised the name of the stepwell many times, but could not seem to communicate with the auto driver or any of the helpful passerbys. Eventually a nearby hotel owner came over and helped us on our way, also ensuring that the driver take us to two other sites for a smashing good price. Not having researched very much, it was nice to make our day trip more worthwhile. 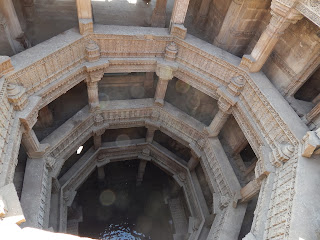 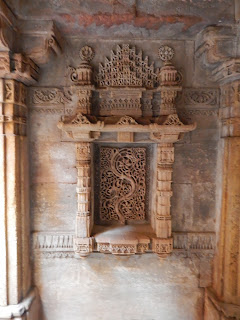 The stepwell was beautiful albeit not what we were expecting. It was nice that each stepwell we visited had a completely different design and feel to it.

The first bonus stop was at Gandhi's ashram (we think?) where we learned a lot more about his life, and Craig relayed the stranger of Gandhi's (non) sexual practices and beliefs to Erin.

The second bonus stop was another Jain temple. Although not as overwhelmingly beautiful as the first, we still had to go very slowly to appreciate the complexity of the designs. Photography wasn't allowed in this one.

On our way into town we had seen a long market street, so we ventured out in the afternoon but failed to find any great deals besides a new pair of headphones for Craig. 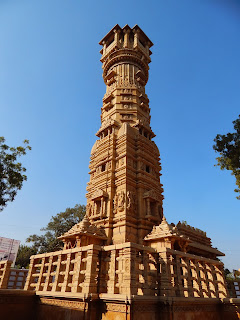