To explore some of the surrounding areas we got ourselves a driver, Mr. Singh. We were interested to visit some Bishnoi villages; the Bishnoi value environmental protection above most else and have for over 500 years. This was famously demonstrated when 363 followers clung to trees to protect them from being cut down, and the trees went unharmed but the 363 villagers were beheaded by order of the King. 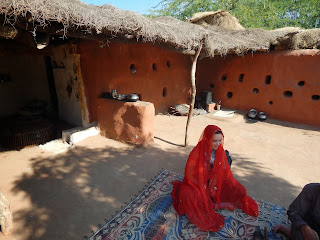 We saw the place where they, and supposedly some of the descendants of the trees they protected, were buried and visited a family's home. Bishnoi means 29, referring to the 29 tenets that they follow. These include rules for personal hygiene as well as environmental protection and random rules about how women have to be segregated for 5 days during their period. We felt a little guilty having broken X number of the rules already, but were confused when we were told it would be rude if we didn't break another with the family we visited. 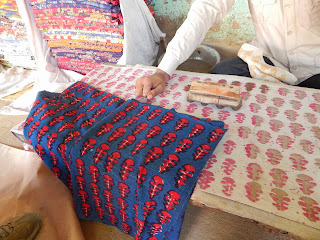 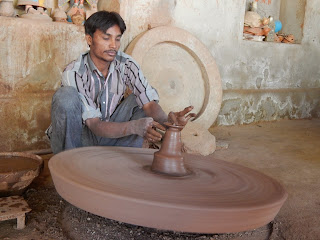 We stopped at a few collectives for pottery, block-printing, and handloom-weaving where we picked up a few souvenirs. For lunch we sat on a concrete floor while the matriarch of a weaver's family cooked for us on an open flame. We carried on what conversation we could and after lunch we were off to Osian.


Osian used to be an important trading and religious center; it is an oasis in the Thar desert. We popped in to visit a goddess temple and a Jain temple. Both were stunning, the goddess temple with its mirrored silver walls and the Jain one with its various marble carvings. Erin elected to skip the Jain temple after our attempt to enter resulted in a shouting match that no one would tell us the subject of. 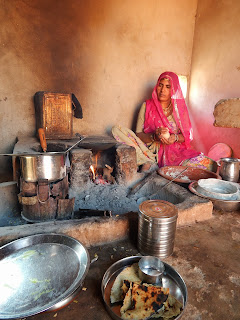 The final stop of the day was to go for a sunset camel ride over the sand dunes. Our camels were pretty comfy to ride, although they might have been a tad hungry judging by the way they swung their heads down low to pluck shrubs from the earth whenever the opportunity presented itself. Craig dubbed this our "shrub crawl." The camels got a rest and we had an opportunity to stretch our sore legs while we watched the sun dip below the sand dunes, then it was back to the blue city.