Day Three: The Petra of Africa

When Craig suggested we add Ethiopia to our itinerary, Erin wasn't so sure. But he soon caught her attention with the promise to visit the "Petra of Africa" in the beautiful town of Lalibela. (Petra was used as the home of the Holy Grail in Indiana Jones and the Last Crusade)

We had planned it for the end of our Ethiopia journey, but had to rearrange things due to a conflict with bus schedules. So today we got up at 4 am to fly North. The great thing about coming today - Saturday - was that it is Market Day. As we drove from the airport to town, folk from the surrounding country lined the winding dirt road up the mountain carrying everything from sorghum grains to goats on their backs. We checked in, dropped our stuff, and headed down the windy cobblestone street with the townspeople. 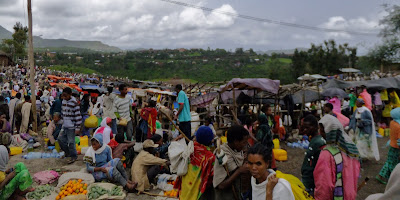 We passed by the traditional steel-covered huts just big enough for one person to stand in, where people sold their goods, and thought it wasn't much more than what we've already seen here. But then we crested a hill and looked down on a huge merkato full of colours and sounds, and lots and lots of people! 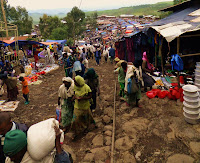 Being some of the only white people around, we quickly attracted attention. Many small children came up and boldly or shyly said hello, reaching their hands up to shake hands. School-age children befriended us, showing off their knowledge of Canada by asking "Ottawa?" "Toronto?" But when Erin said "Calgary," one boy asked if that was in Europe. Another boy followed us showing off his knowledge of European capitals and made the mistake of asking Craig for a hard one. After being asked Andorra's capital he disappeared into the crowd. 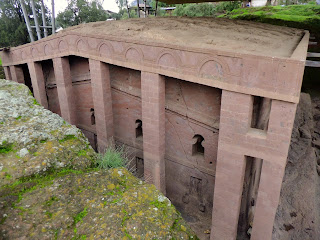 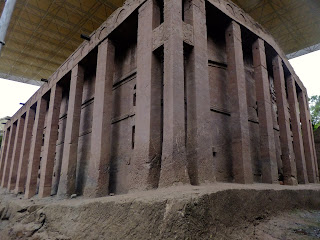 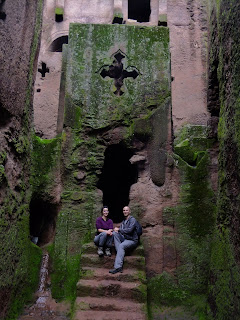 (Above: Exterior of Biete Medhane Alem)
After lunch we found a guide and started our tour of the rock-hewn churches dug into the red sandstone of the mountain. According to our guide, every guide will give you a different reason or legend, King Lalibela built the churches to make a new Jerusalem in the hopes that Ethiopians would make the pilgrimage to Lalibela instead of the much longer journey to Israel. The 11 different churches are each dedicated to religious figures and are ornately carved. The pillars and reliefs inside were incredible! Unfortunately, we were slightly distracted by rumours that fleas live in the tapestries draped on the floors, so we hope hot water and soap kills them off!

Our pictures can't describe the chorus of endemic birds, children playing, roosters crowing, and general merriment echoing off the gorgeous hillsides as we sit and drink Ethiopian wine (something that exists!) from our hotel restaurant. Although tiring, this has been our favourite day of the trip so far!