So far we have had a lot of trouble communicating in Addis Ababa, as very few people have conversational english. This is not new to either of us on our travels, the difference here is that we can't seem to even come close enough to be understood when saying place names, menu items, or thank you (now on day 5 we might have it down... most of the time). Pointing works for menus, smiling and bowing or an english thank you can generally express our gratitude, but communicating with taxi drivers and hotel staff about where we would like to go has been very difficult.

To make matters worse our hotel shares its name with a nearby city. When we first arrived and told the driver where we needed to get to, he responded that the bus wouldn't leave until tomorrow morning. After a few minutes of discussion while we walked past brand new taxis, we were able to communicate that this was the name of a hotel. Once this had been accomplished he immediately assured us he knew where it was, and then had a long conversation with other drivers in which everyone seemed confused. Just as we were about to get in the most beat up taxi in the lot, Erin spotted someone holding a placard with our names on it, the hotel had sent someone after all.

Back to day 3, after trying to communicate that we wanted to buy a bus ticket to Bahir Dar (we have since learned it is pronounced more like bardar), and then go to the Debre Zeyit Lakes (we still have no idea how to pronounce this), we were able to get a driver to take us through the horrendous Addis traffic to our destinations. The driving in Addis is some of the scariest either of us have encountered as there are no lights so the flow of traffic dictates right of way, if you need to cross the flow, for example make a left hand turn, you end up weaving through 3 or more lanes of oncoming traffic. 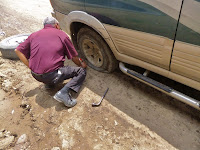 Once we had made it out of the city, our vehicle suffered a flat tire, but this proved to be only a momentary inconvenience. Once we reached the lakes we found a restaurant on a cliff above Boshoftu Lake, a serene lake surrounded by steep hills and cliffs with green mountains in the background and many different species of birds flying above and below. Unfortunately our camera died shortly after arriving. 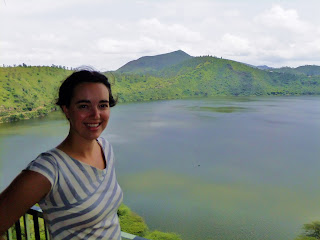 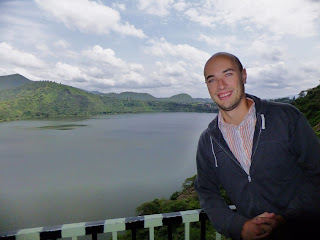 After lunch we made our way to Hora Lake and wandered around the shore for awhile, Erin decided to be nice and asked two men taking pictures of each other with their cell phone if they "wanted a picture together", they took this as Erin offering to appear in a picture with them, so they went and got someone else to take the picture.

In the end we were not able to get a bus to Bahir Dar so we changed our route and flew to Lalibela for Day 4.
Posted by Craig & Erin at 11:05 PM