Day One: Dive Right In

When people asked us where our first stop was and we told them Ethiopia, we got a lot of raised eyebrows. "You're diving right in!" they'd say. Although we had planned to take it easy the first couple of days, by 10:30pm we admitted that we'd had a pretty full first day.

It started heavy with a visit to the Red Terror Museum...one our driver took us to, even though we'd asked for the National Museum. The Red Terror was dedicated to the people who had been opressed, imprisoned, tortured, executed by the military dictatorship which ended in 1991. Our guide was a volunteer who had been imprisoned himself. He led us around the simple, yet powerful, displays explaining what Ethiopians went through to gain their democratic freedom. 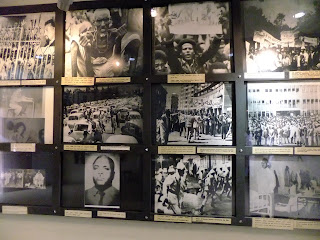 We next visited the Addis Ababa Museum where we learned about the capital city's history, and finally the National Museum to see a cast of "Lucy," our oldest ancestor.


After lunch and a nap, we ventured back out to find the Crown Hotel where they had a separate "cultural" restaurant. We ate traditional food, "tibs" which is sauteed lamb, onions, and butter served on a giant rubbery pancake, and drank "tej," traditional honey wine. We chose this restaurant because they entertain you with music, singing, and dancing from the 13 different Ethiopian ethnic groups inside a "tukul" which is a cone-shaped hut with a thatched roof. Erin even got pulled up to dance! 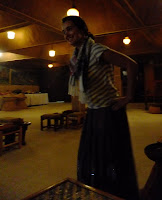 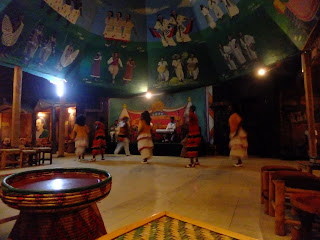