Balkans Days 23-29: Sarajevo The Past 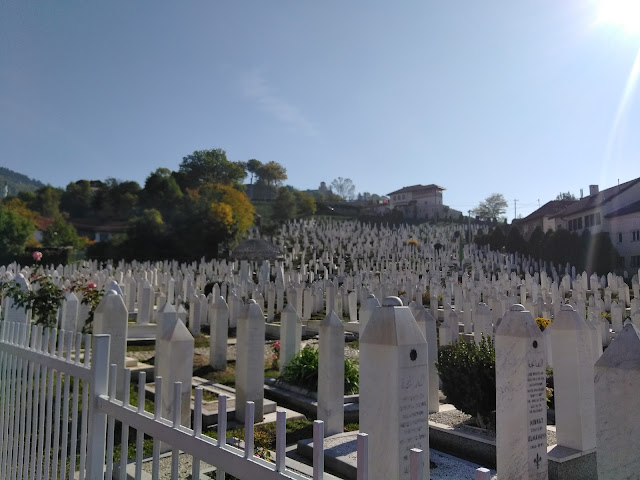 When people asked us, "Why Croatia and Bosnia?" before we left, we had a variety of reasons to share. We'd heard many say that Croatia is such a beautiful country (which is definitely true), Erin is always looking for some beach time, Craig lovely tiling and architecture (which we both got), and there was the undeniable appeal that Bosnia is more off-the-tourist track than any location we've visited since our "big trip." We really wanted to learn more about the recent history of the two countries in a deeper and more personal way than a textbook (or Wikipedia site) could manage. We're glad that we took the time to learn a bit of how the disolution of Yugoslavia impacted the cities we visited as the experience of each city and its citizens were quite different. 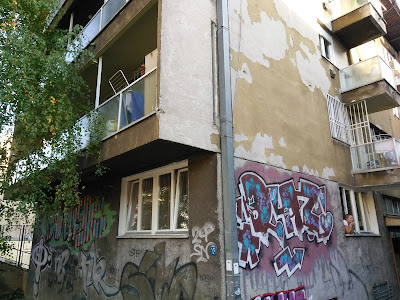 In the three weeks leading up to our arrival in Sarajevo, our knowledge of the events here grew. We saw photos and read recounts in various museums in Dubrovnik and Mostar. We read the book The Cellist of Sarajevo by Steven Galloway. We were reminded of information we already knew through media, news, etc when talking with locals and tourists. It was great to have that base knowledge before entering and it was interesting to see how our perception of the city was different from reality once we were here.

The valley was tighter, the river narrower, and the hills, where snipers and artillery were once perched, were so much closer than in our minds. It was unbelievable to think that civilians could cross the bridges so widely out in the open carrying containers of water, balancing on whatever rails were left after bombings. Shrapnel wounds frame windows and some buildings remain a hallow shell. The city has found ways to heal yet still honour its past by filling in the craters left by mortar attacks that murdered civilians with a red resin, called a Sarajevo Rose. 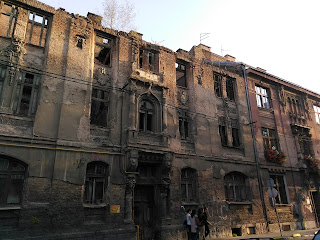 We joined a walking tour that focused on the Siege of Sarajevo and enhanced our understanding of what life was like here in the 44 months when daily shellings rained down on a city cutoff from itself and the outside world. Our guide, Nemo, was only a child at the time (ages 7-11). He openly shared with us his perspective of the events along with the historical facts. As we wound our way through the city, many locals stopped to listen in on what he was saying. He shared that sometimes people will yell at him as he talks, uncomfortable with his openness of his experience or worried that the facts he's sharing are coloured. We felt that he did a great job presenting things, often addressing how his experience affects the way he views the war and the current state of the country but recognizing that for others, and especially those in different cities, their experience was very different than his. It was powerful to see people our age on the street and think of what they went through while we were busy listening to walkmans, wearing scrunchies, and watching Jurassic Park.

There was lots of time for quiet reflection in Sarajevo. Twice we hiked up one of the surrounding hills to reach views of the city below and the surrounding countryside, once to the Yellow Fort, and once to the Olympic bobsled and luge run. Looking out, it's hard to believe that such a tragedy took place in such a beautiful, peaceful place.

We were reminded often this week of the time we spent in another recently war-torn country, Rwanda. How was the world able to stand by and let such massacres occur? Were we unaware? Were we unsure of whether to get involved in another country's internal strife? (The Bosnia war was not a civil war as both Serbia and Croatia were involved). During our tour Nemo said that the goal of the Siege of Sarajevo was to make the living conditions within the city so bad, to create such fear and indignity, that the citizens would surrender. The tactic was carefully designed to skirt the edge of killing some people every day but not attacking so strongly that the international community would intervene. If this is true, it doesn't say a lot about us. What atrocities are going on currently that we're turning a blind eye to?

In Dubrovnik, part of the War Photograph Museum included a rotating exhibit on current conflicts and acts of human rights abuses. We saw photos of the civil war going on right now in Yemen. The numbers were staggering. In the past two years, over 10,000 civilians have been killed by this war. Civilians. In 2015 it was estimated that 850,000 CHILDREN were starving. 13 million civilians did not have access to clean water. Unicef and WHO believe that as of June 2017, a person an hour dies of cholera in Yemen. What are we doing to help? This is, of course, only one example of many. 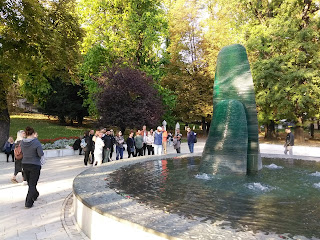 Perhaps the most emotional stop on our guided tour of Sarajevo was at the Children's Memorial. You can tell that great thought went into this monument. A statue has been erected depicting a parent shielding their child from shelling and sniper attacks. The water bubbling beneath them represents the tears fallen for their lost children. The base of the structure is made from melted down shrapnel and casings and it's imprinted with the footprints of surviving children who lost young friends and family members during the war. The statue itself is made from 1600 layers of glass, one for each child who was murdered in the siege. A plaque off to the side shares their names from youngest to oldest. It is a beautiful piece set at the foot of a lush park. Families were gathered there to enjoy the late afternoon sun, kids chasing each other around it, riding on scooters... the perfect place for such a monument. But it shouldn't be there. It shouldn't have needed to be built at all.

At the Srebrenica Gallery, stunning black and white photos share the events that unfolded in Srebrenica in Eastern Bosnia when more than 8000 Muslim Bosniaks were murdered in ethnic cleansing in June 1995. The room, nearly silent with tourists reflecting on this event, the atmosphere heavy with grief, was brightened by our baby content to walk in circles holding on to the stroller, so close to walking consistently independently. An odd scene but one that truly shows the feeling that life moves on. We'll take what we learned and felt here back home with us, and try to find ways to make the world a better place in whatever way we can.

If you're interested in learning more about the Siege of Sarajevo or the genocide in Srebrenica, here are two books we read that helped us gain a more personal understanding of the events:
- The Cellist of Sarajevo by Steven Galloway
- Bone Woman by Clea Koff