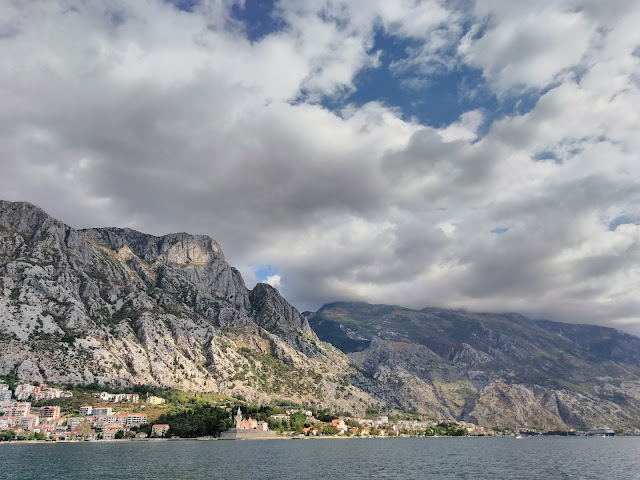 Flexibility is an important quality to have when embarking on long-term travel. This was something we needed frequently when we did our year-trip and has been especially useful when travelling with an unpredictable baby. But determination is also helpful.

Back when we were planning this trip, we decided that we wanted to go to Croatia, Bosnia, and Montenegro. We laid out our itinerary, knew that Dubrovnik was a great launching point to visit Montenegro, and even booked a night's accomodation in Kotor. It was only when we realized just how expensive the "take-a-rental-car-out-of-the-country" tax was that we changed our minds. Our hopes dashed, we tacked the extra day on to our stay in Dubrovnik to line up ferry schedules and to coordinate visiting a childhood friend of Craig's. We'd find another time to go, we decided. But truthfully, we were a little disappointed.

So when we got to Dubrovnik and saw that there were tour companies all over the place advertising a day trip to not just Kotor but Perast and Budva as well, our eyes lit up at the chance to still go. We're not usually fans of tours but for less money we'd see more of the country, not have to worry about border crossings, and get a small boat trip out of it. The huge drawback was our lack of flexibility. We'd be stuck for chunks of the day with Baby on a bus or a boat with other people and most certainly without a crib. Hmm. Was it really worth it to try? She might be a screaming mess ruining our time along with everyone else's on the tour. As we previously mentioned, sleeping in the stroller has not been her strong suit recently. But this was our chance to go after we'd already given up on the idea. We had to go for it.

Fast forward to 4 am the morning of. We'd already gotten up once with Baby. She'd been crying HARD in pain from her teeth, apparently. This was no longer looking like such a good idea. We crossed our fingers that we could each get a little bit more sleep before we needed to be up at 6:30 to leave. We did in fact all fall back asleep and didn't wake until Baby got up next...at 7 am. Craig's alarm hadn't gone off.

This is where Erin's meticulous planning skills really paid off. We were out the door - with a baby, let me remind you - in 15 minutes. That included Erin nursing Baby and Craig making eggs for us for breakfast. We had everything we needed and were at our pick-up spot 5 minutes early. Major parenting points!

As we waited outside one of the Old Town's three gates, we realized just how insane Dubrovnik's traffic is. With only three entry points to the town, congestion was astronomical. Tour bus after tour bus stopped to unload cruise ship passengers, shuttle buses stopped to pick up day-trippers, intercity busses stopped to pick up travellers, and city buses stopped to pick up locals. There were vans delivering food and supplies to restaurants, men driving little carts with fresh laundry to drop off at hotels in the old town, dollies piled high with produce for the daily market... and it ALL seemed to be scheduled for exactly 7:30 am. It is amazing that we were able to find our correct transport vehicle. We jumped in a little groggy but relieved and energized for the day ahead.

Our driver and tour guide got us right on our way. Baby happily waved at the different passengers in our van, and we watched the same views unfold before us as our drive in from the airport.

We started getting a bit anxious as we approached the border as our tour guide reinforced just how out of his control this portion of the tour was. "It could take 5 minutes or it could take 4 hours. It depends on today's guards." Thinking it was maybe just the situation that had us sweating, we brushed off the raising temperatures as we idled in the line. Five minutes later; however, our guide jumped out of the car breaking the only border crossing rule he'd given us (nobody leaves the vehicle), talking frantically into his cell phone. He got back in to move us forward and briefly apologized to us for the heat.

The air conditioner was broken. He gave us little information as he jumped out again, muttering something about us needing to wait for a new vehicle at the next town. As we drove through no-man's land (having had only a quick stop at the Croatian side - yay!), he shared that it was more than just the air conditioner that was conking out. Our whole electrical system was crashing. He hoped that we could make it to the bottom of the hill where there was a town we could stop at.

Admist all of this, he also asked us if we wanted our passports stamped when we entered Montenegro. Hearing a chorus of "yes"'s, he grabbed two beer from his glove box and proceeded inside the station. He came back beer-less and announced that we had stamps. :) 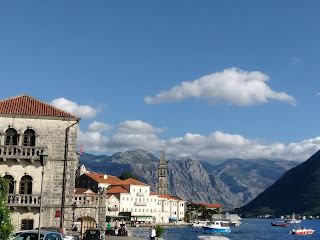 It felt like the whole 15 of us held our breaths as we sailed downward to the town below. It turned out that we had a scheduled pit stop here anyways, and that half of our party was actually getting off at this town to board a boat to continue onwards. The tour we had paid for kept us on the bus for much longer so that we could get to see all three aformentioned towns. Our guide informed us that our 10 minute pit stop would now be 30 minutes and that everyone could meet back at the van at that point. We grabbed a quick coffee and snack at a cafe, put Baby to sleep successfully in the stroller, and met back up with the group at 10 am.

Of course, the situation had changed. It would now be an hour more of a wait until a new van arrived. Our guide encouraged us to switch to the other tour, offering us a discount for the increased cost, and everyone changed over to the boat tour. We quickly boarded a small catamaran with us apologizing for the ridculous amount of stuff we had with us ("We'd intended to leave most of it on the bus!"). With all the commotion, Baby had awoken after only 10 minutes of sleep so we looked about a little anxiously as we pushed off from shore. Whether it was the right decision or not, we now had to live with it. She wouldn't sleep, she wouldn't nurse, and it was clear that the previous night's wailings had, in fact, produced her first tooth. Maybe we should have packed the Tylenol. 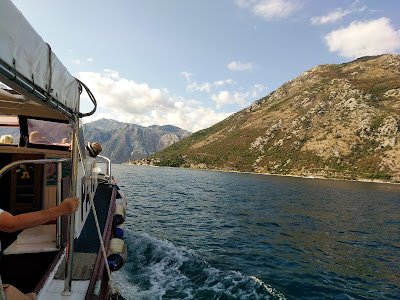 In the end, Baby was more resilient than we even give her credit for. She enchanted the other passengers, focusing particularly on a group of three grandmas travelling together. She loved the boat and all of its interesting parts. And everyone was very accommodating to her grabbing their stuff from their bags, hanging on to their knees, and having their shoelaces tugged as we bobbed along the stunning coastline.

Montenegro was lovely. We sailed along the tighter coast between steep jutted mountainsides. Deep gorges were cut into the stone and we entered a fjord high and narrow. Little towns maximized the tight space between the crest of the water and the quick rise of rock. Houses dotted the entire coast that we road along. 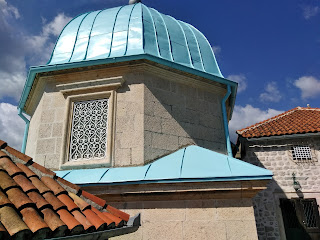 We came first to two islands that are just off the coast of Perast. Our Lady of the Rock was a man-made island that houses a church built by the generous donations of sailors so they would be watched over while out at sea. The beautiful blue dome stood tall atop the rocky mantle. It was charming despite being overrun with tourists. We considered trying to get Baby to sleep but the stop there was too short. Back in the boat we were finally able to get her to succomb to the vibrations of the boat and she drifted off. 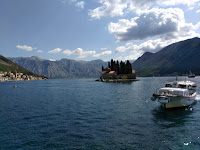 It was great timing as we were then served lunch. Our expectations had been admittedly low, but instead of meat and cheese sandwiches it turned out to be a beautiful spread of sliced meats, tomatoes, cucumbers, and pickles. Domestic wines were offered and everyone chatted and seemed pleased with the change of plans. 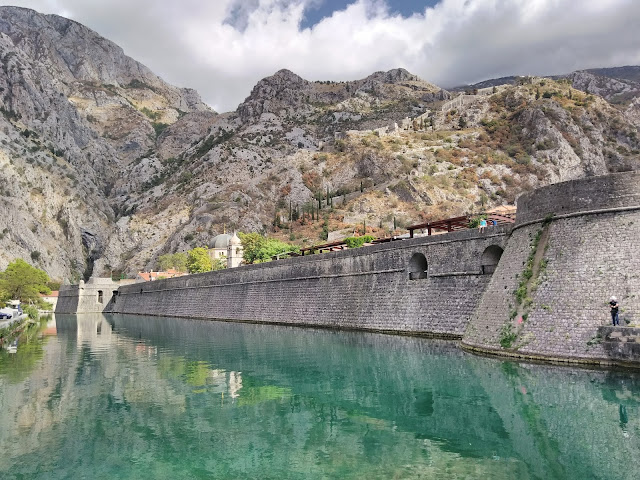 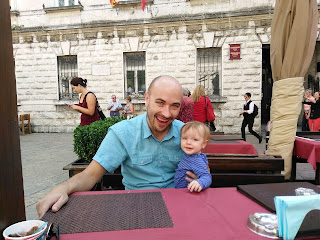 Kotor was noticeable from a distance. Like Dubrovnik, it is tightly ringed by its defensive wall, unlike it in that its moat is still full of water. As we crossed into the old part of town on foot, we were transpotred to another era. Tiny streets twisted and turned with low arched doorways over tiny shops. A peek inside showed that the arches continued in the interior, making each shop seem set in a cosy cave. They boasted wares of lavendar dolls, stonework, and intricately designed glass lamps. It truly felt as though we were walking through Diagon Alley. It seemed that every fifth turn brought us to a new church or another corner of the small city's walls and we were quickly sheparded back toward the centre. After we felt that we'd wandered enough, we chose what we felt was the most atmospheric square and nestled in for a drink and a snack. 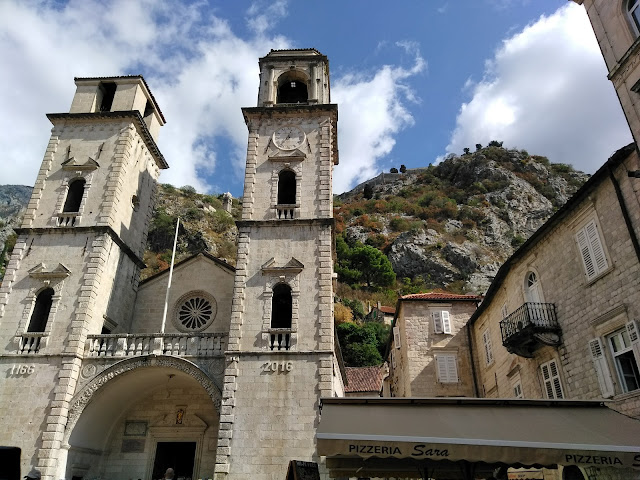 We had a quick stop in the town of Perast on our return trip, where we strolled the waterfront and looked back out at the two small islands. Then a short boat trip dropped us back at our van with our original driver and guide and we effortlessly passed through the borders and made our way back to Dubrovnik as the sun was sinking beautifully into the sea.

We had survived - and Baby had thrived - during our 12 hour day international trip now dubbed as Baby's first tooth celebration!
Posted by Craig & Erin at 11:52 AM

Email ThisBlogThis!Share to TwitterShare to FacebookShare to Pinterest
Labels: B. 04. Montenegro