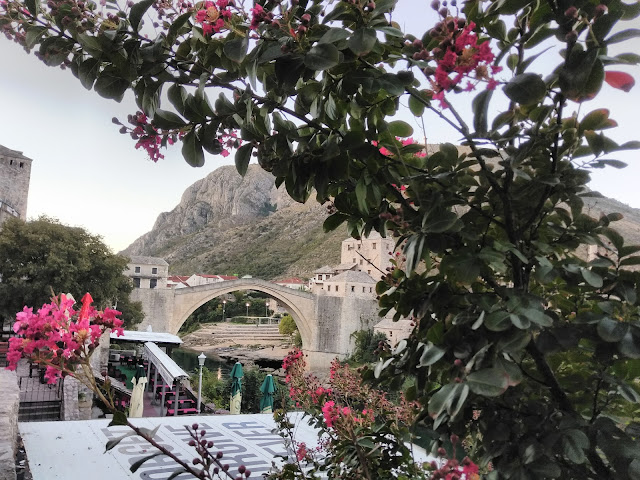 The drive to Mostar from Split was stunning. Absolutely breathtaking. We hadn't really thought much about it beforehand. We'd originally planned to take a train, then discovered we couldn't and settled on a bus. A much less direct route but it was what it was. 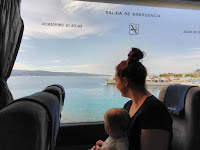 What it was turned out to be a road that first hugged the Croatian coastline taking us by secluded bays, white pebble beaches, and a town squished between the water and a sheer mountainous facade. Then onwards into the Bosnian valleys with lolling hills and ample pastures. Our border crossing was smooth; in fact, our entire journey was very, very easy. The only difficult part was that Baby would NOT take her nap. When we finally rolled in to Mostar two and a half hours past her usual time to go down, she was barely keeping it together. But we'd made it. 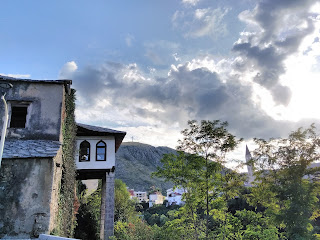 Our host generously met us at the bus station and helped us with our ridiculous amount of baggage. She guided us to her parents home fondly called "The Old Lady" because they have left it intact from when her husband's grandmother used to live there. We wondered if they displayed the many heirlooms out of pride, gratitude that these little treasures had survived the war, or relief that they didn't have to store any of it in their home. The house was unique in design (at least for us Canadians). There was a private inner courtyard (that was outside) that separated the kitchen from the rest of the house. Our host looked at us sceptically, repeatedly asking us if we were cold and letting us know that there had been flurries the evening before. We tried to reassure her that we were prepared - "We're from Canada. We're ready for snow."

The chill in the air was just one thing that felt different from Croatia. Mostar was a little grungier, less affluent, and more authentic-feeling, if that makes any sense. Dubrovnik, for example, seems very regulated. Buildings have been upkept and repaired in strict fashion to keep the mood and style of the town the same. The damage you see there can be difficult to discern whether it's wear and tear over time or specifically from the recent war. In Mostar; however, the shelling and sniper wounds on buildings were quite visible. Houses stand abandonded, sometimes only the exteriors left now with trees growing inside. We saw many people begging, usually mothers with their small children. The air hung heavier, often filled with inscense or wood-fired stoves and the call to prayer echoed in the distance. 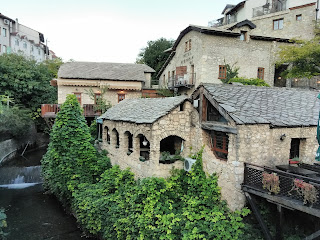 It was too late in the day to go exploring so we attempted to settle in, comfort Baby, and have dinner. The only heater in the house was located on the first floor, with the bedrooms being above, so after many sleepless hours and lots of crying, we rearranged ourselves with Baby in the downstairs living room in case it was the coolness and not her teeth or overtiredness that were causing all the discomfort. We were able to get a few hours of sleep before she absolutely refused to be put back down at 5:30 am. We shrugged and decided to make the most of it. Bundled up more than we had been in seven months, we headed out to see the old town. 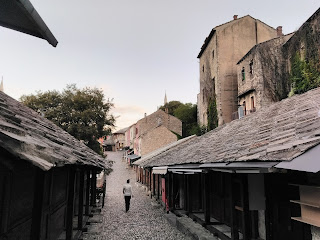 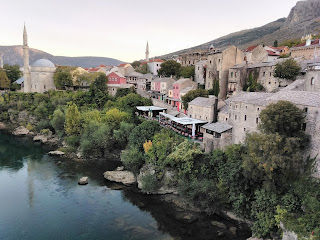 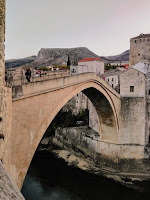 Mostar is home to the icnonic bridge that is the most recognizable Bosnian landmark. As we set out to find it, we had to thank Baby for getting us up this early. With the shops that line the cobblestone pedestrian lane leading to the bridge still shut up tight, we could better appreciate the history and architecture of the town. Only a few souls joined us that early, cameras in hand, capturing the early light on the bridge and the surrounding hillsides. We walked across and back, marvelling in its height and the fact that men dive off it into the icy river below multiple times a day for money, then headed home for breakfast.


Our next two days consisted of us trudging back and forth to the main street and bridge to admire its views, wait expectently to see a dive, eat gelato, and torture Baby with the amount of time she needed to spend in the carrier (Mostar is NOT stroller friendly!). Baby had her own goals for our time in Motar: she perfected her pronunciation of "Hi" and used it on every passing person (and pigeon and kitten) within earshot, much to the delight of the shopkeepers and tourists (and maybe the pigeons?), and accomplished a series of independent steps when she was distracted enough to not notice that she was actually walking independently. 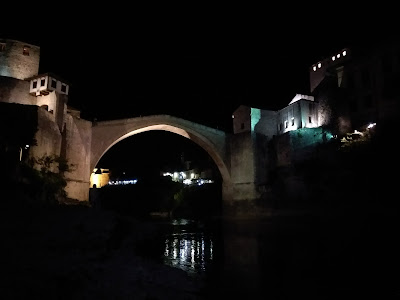 We never did see a dive off the bridge. We were in the vicinity multiple times and even sitting and eating lunch watching it once but both missed it while concentrating on feeding Baby and admiring the surrounding views. The whole thing is a bunch of B.S. if you ask us. Men collect money, prance around on the edge as if they're going to jump, raise their arms up like Olympic divers, clap their hands, stretch, then get back down and go into their little hut leaving their donors to either wait or give up and leave. When they finally feel they have earned enough money or when the wind feels right, or whatever their sign is, over they'll go with no notice or working of the crowd. More than once we heard a diver bereating tourists walking by, calling out racist remarks, trying to get money from them. It was a huge disappointment and could easily be improved to still gather the funds these gentlement need (and deserve for their stunt), but also leave the viewer feeling much more satisfied.


But enough about that. After many trips down to the bridge that seemed to pull us so greatly, time spent examining the various museums about the history of the bridge and Mostar and the Ottoman and Hungarian empires, we pulled ourselves away and headed to our last and much-anticipated destination: Sarajevo.
Posted by Craig & Erin at 8:57 AM