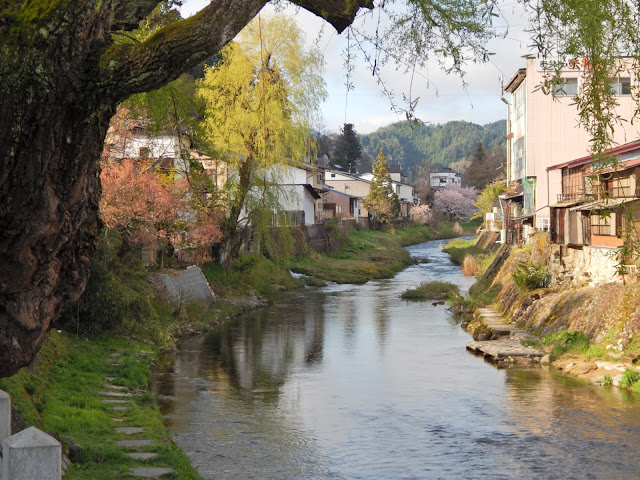 It felt great to hit the open road again, the first time back on the left since our amazing New Zealand and Australia adventure last year. There's so much freedom that comes with having your own car and for this trip it allowed us to reach further corners of the country than we would have been able to with Baby in tow (there are some places trains don't go).

We continued with our trend of staying in smaller and smaller towns (the population of each place we're visiting this trip is literally getting smaller with each stay) by heading into the rural mountainous region around Takayama. 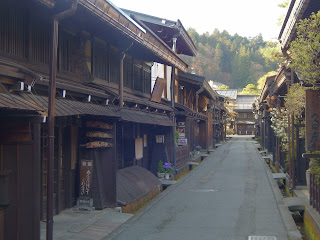 Wanting a more traditional Japanese experience we booked a series of nights in two different ryokan, traditional Japanese inns. Each one had its own onsen (either a bathhouse or natural hot spring) inside and, since onsen are usually divided by sex as bathing is in the nude, an important bonus for us was that they each had a private onsen that we could all use together. Our before-bed baths as a family were lovely with the onsen providing a natural feel with stone and the second was open-aired with a small private courtyard, complete with cherry blossom petals floating down from the branches above.


Yukata (cotton robes similar to their silk Kimono counterparts) were provided by the ryokan for use going to and from the baths, around the inn and to dinner. Rooms were large and open and consisted of futon mattresses and duvets on the bamboo matted floor for sleeping and a low table for tea. We managed to rig up a screen so Baby wouldn't be distracted by us when she was trying to sleep, which sort of worked... 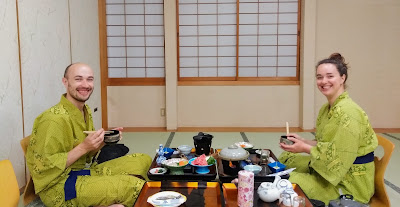 In Takayama, we took advantage of the range of our baby monitor and had dinner together after Babe had gone to bed - a real treat! Our indulgent feast included fish cooked on a "wanosato" (a fire of smoldering embers with river fish roasting on sticks so as to resemble a fish swimming upstream), miso soup, the best tofu of the trip in a sesame sauce, sashimi and assorted veggies, rice, a tempura course and on top of all of that, our meat dishes. Craig tried "shabu shabu" where you're given a small pot of boiling water to dip your thinly sliced beef in. (Shabu shabu literally translates to "swish swish" as you swish the meat back and forth to cook it). Erin had "donabe" where the meat is cooked in a ceramic dish at your table. Both were delicious and the entire experience felt very decadent with neither of us having to clean or cook or look after a child during the meal. It was very reminiscent of our favourite meal from our trip to Croatia! 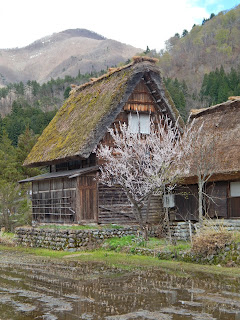 During the days, we did our normal wandering through pretty streets but also found the time to go to a few museums. Wanting a deeper understanding of the subject matter, we also experienced it first-hand in the field before visiting the museum.

First, on our way to Takayama we stopped in Shiragawa to see the world heritage site of the preserved Hida homes in a lovely valley. Once in Takayama we visited Hida no sato (Hida Folk Village) consisting of homes that had been relocated before hydro-electric dams would have flooded them. It was done especially well. As you circled around the gorgeous pond (with a stunning view of the Japanese Northern-Alps as your background, I might add), you were able to take part in activities to help you understand their traditions and lives. There were games to play, straw to weave, silk to spin...you could honestly spend an entire day there. 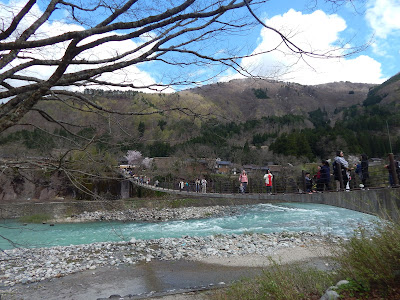 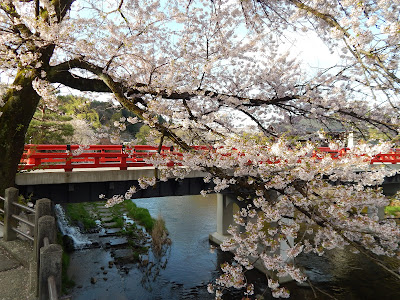 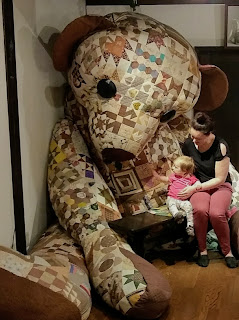 With the Teddy Bear Eco Village only a few steps from our front door (billed as a museum of eco-consciousness), we just had to go. If not for us, so that Baby could see all the bears, and hopefully not be scarred for life.

Expecting something vaguely creepy, the museum contained well-designed (though somewhat inaccurate) displays on the history of teddy bears, their development through the 20th century, a very odd wedding chapel scene with enormous bears getting married, a surreal outer space room in a loft upstairs, and a series of vignettes teaching us about our planet and how we're wrecking the Earth for ourselves and our animal cousins. Embedded subtly in all of that was the belief in auras and aura cleansing (why not?). We could fill this entire post with pictures and videos from the museum but wouldn't want to spoil the experience for anyone else. 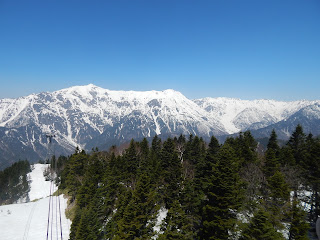 Not surprisingly, the mountains themselves were also a highlight of our road trip. On our drive from Takayama to Hirayu, we stopped to go up a set of ropeways, climbing well over a kilometre into the sky. We had a gorgeous day with spectacular panoramic views and there were hardly any people there. The second gondola was a double-decker, holding over 100 passengers! We lucked out and got seats right at the back and enjoyed views all the way up the mountain. On our way down we lived out a romantic Terrace House-inspired dream date by taking a foot bath in a bubbling sulphuric stream. 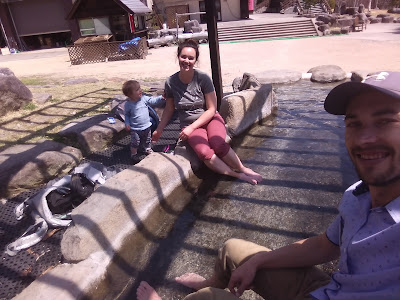 Ahead of us lay a long travel day that would get us to our next stop. We'd be going from the mountains to The Mountain...
Posted by Craig & Erin at 11:46 AM