Well, here we go...a new style of travel for us...with a baby! And we're starting big: a two month journey through New Zealand and Australia!!! We're going to lay this disclaimer out right at the start - you're going to be jealous of how amazing our baby is. There, we said it. We know we're incredibly lucky but we're also going to take all the credit. We're here to prove that you can still live the travel life post-childbirth. Or, at least, we're hoping to...

Baby determined when our first day began. We had gone to bed with our fingers crossed that she'd sleep until at least 3 am since we didn't actually need to be up until 4. We rose at 2:45 to feed her - not bad. There was no going back to sleep now. Our travel day had officially begun. It seemed she could sense our excitement. We tried putting her back to sleep after nursing so that we could finish our last-minute packing more efficiently, but she rolled around in her crib wide-eyed and laughing. She at least didn't need any attending to.

Without too much trouble, we got to the airport and through security and had enough time to eat a big breakfast before boarding our plane. The flight to L.A. was fairly uneventful. Baby nursed on the plane while everyone else was boarding and fell asleep at take off. So far she doesn't seem bothered by the pressure changes in her ears. She slept through us watching a movie and then played for a bit. I was thankful we'd brought our nursing pillow as she happily stretched out and kicked and slept on it.

It was Erin's first time in LAX and she quickly saw the truth to its reputation. After going in circles for a while and receiving dismissive unhelpful assistance from staff, we finally found our way out to street level and got ourselves to our nearby motel. The Super 8 Inglewood...yeeeah! It was actually really nice and suited our needs perfectly for the next few hours as we waited for our next flight. Baby played on the bed with the few toys we'd brought, slept in her stroller, and enjoyed our little outing to a great taco place for take-out (and we thought we wouldn't get to use Spanish on this trip!) She seemed a bit perplexed that she was able to be outside in a footless sleeper without multiple layers and coverings.

At 6pm we headed back to the airport, nervous because of the huge line we'd seen at security when we'd left. But it wasn't that bad and we ended up with an hour or so to kill before boarding. At this point it was well past Baby's  bedtime and she was definitely getting frustrated with the constant waking and falling asleep (needing to be taken out of the stroller at security, getting on the plane, etc). But it didn't take too long after take off for her to pass out and we were able to transfer her into the bassinet at the bulkhead. We'd been skeptical that she'd sleep in it but she was probably so exhausted at that point that she didn't notice. We were able to eat dinner and watch a movie/snooze for most of the flight. She held her normal routine of sleeping for 11-12 hours, walking only once to nurse. She fell asleep almost immediately after nursing, went back in the bassinet and timed it perfectly to wake up next right around the time they were slowly raising the lights to feed us breakfast. She even woke up the same way she does at home - laughing happily to herself.

All in all, it was a fantastic flight and we were so proud of our little traveller! We proceeded through customs where she got her first-ever passport stamp, collected our bags and switched terminals. This is where things started to break down a bit. Baby was upset nursing in the family washroom because other people could come in to change diapers, and upset with this last plane ride, falling asleep only right at the end, but it was thankfully a short flight (1.5 hours) and before we knew it, we'd navigated our way to our first Air BnB apartment. 40 hours in the books and we had a smiling, laughing baby at the end of it all, presumably just as glad as us to be back in a home. 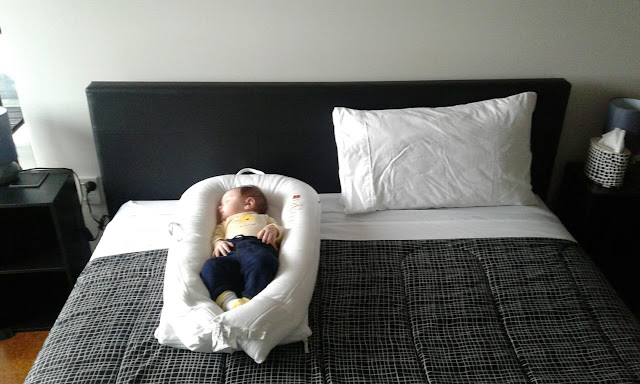 P.S. I wasn't sure how to label the post since we technically lost an entire day to travel. So let's just go with this...
Posted by Craig & Erin at 2:41 PM